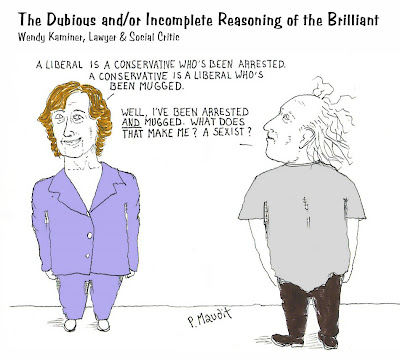 Rather than pumping more haze into the Gates’ affair, the media should have been more interested in determining what precisely constitutes the law and whether or not Gates had broken it. Gates, a black Harvard professor, was arrested for disorderly conduct in his own home. Imagine if you had a cop at your front door or inside your home and the cop arrested you because he or she didn’t like the tone of your voice. Or what if the same occurred outside on a street or sidewalk? This kind of thing happens perhaps more often than most of us would believe and, evidently, undermines democracy in America… at will… at a cop’s will.

Like Gates, I too was arrested for disorderly conduct in Massachusetts. However, unlike Gates, I am white and not a renowned multimillionaire. Also, unlike Gates, I was not released, but rather incarcerated for a day and had my car towed for a personal cost of $98. If anything, from my perspective, the question is not one of race, but rather one of wealth and renown.

What precisely is “disorderly conduct” and why did the press seem to focus on race, rather than on the law? Sadly, “disorderly conduct” is anything but “precisely.” Britannica Concise Encyclopedia defines it as “conduct likely to lead to a disturbance of the public peace or that offends public decency.” For lack of a definition, “public peace” might be defined as public complacency and absolute obedience to the bourgeois power structure, white AND black, which the police serve and protect. And “public decency” might be defined as bourgeois behavior and taste. Britannica further notes that disorderly conduct often includes “the use of obscene language in public, fighting in a public place, blocking public ways, and making threats.” It does not note, however, whether or not it includes being “disorderly” in ones own home. Purposeful vagueness of course purposefully serves the power structure.

with purpose to cause public inconvenience, annoyance or alarm, or
recklessly creates a risk thereof
engages in fighting or threatening, violent or tumultuous behavior, or
creates a hazard or physically offensive condition by any act which serves no legitimate purpose.”

Gates certainly had a purpose: promoting the PC notion of blacks always as racial underdogs (yes, Obama is president and Gates a multimillionaire Harvard professor). But was his a “legitimate” purpose? Again, vagueness serves the power structure. I too had a purpose when I was accused of “disturbing the peace.” I was protesting the lack of free speech at Walden Pond State Reservation. But was mine a “legitimate” purpose? The arresting cop claimed I was “irrate [sic] and confrontational” and had used “offensice [sic] and assaultive language.” Of course, what proves to be offensive to Joe might not be offensive to Jill. Again, vagueness serves the power structure and disserves democracy. Besides, a cop can write whatever the hell he wants in his or her report. The cop, who arrested me, Trooper Crosby, also argued that other people were present and offended, when in fact nobody was present or offended. He failed to produce any witnesses, "offended" or not "offended," at my court hearing.

Disturbing the peace falls under Chapter 272 of Massachusetts Common Law. Savitz notes that “The prosecution must establish beyond a reasonable doubt that your action created a dangerous situation, and served no legitimate purpose. […] Being angry and yelling at someone, even if that person is a police officer, is not sufficient cause to sustain a disorderly conduct charge. You are absolutely permitted to express yourself and your first amendment rights to free speech.”

Cops are seemingly permitted to arrest citizens expressing themselves and their First Amendment rights. In other words, they are not normally punished for doing so. In fact, the arresting officer in my case was rewarded because cops get extra pay in Massachusetts when they have to show up for court hearings.

Chapter 272. Mass General Laws, Section 53, stipulates that “Common night walkers, common street walkers, both male and female, common railers and brawlers, persons who with offensive and disorderly acts or language accost or annoy persons of the opposite sex, lewd, wanton and lascivious persons in speech or behavior, idle and disorderly persons, disturbers of the peace, keepers of noisy and disorderly houses, and persons guilty of indecent exposure may be punished by imprisonment in a jail or house of correction for not more than six months, or by a fine of not more than two hundred dollars, or by both such fine and imprisonment.”

Randy Cohen in his New York Times op-ed, “Why Henry Louis Gates Should Sue,” was right to argue that to oppose systemic injustice a lawsuit might be in order. Sadly, however, he turned what happened to Gates into a racial issue: “A lawsuit by Gates could lead to a formal examination of the troubled history of police interactions with African-Americans and hence would meet this standard.” Whites too are arrested for disorderly conduct. Indeed, what about whites? The real problem is not race, in this case, but rather the law, its purposeful vagueness and lack of punishment for those abusing it, including cops and prosecutors. If he does sue, Gates should not profit from this. If he writes a book on the incident, he should donate the proceeds to charity. His speaking fees should also be donated. Gates is a multimillionaire, part of the power structure, not a poor alienated black citizen. Could Gates win such a lawsuit? Was he in fact guilty of falling into the “keepers of noisy and disorderly houses” category of Chapter 272? The law needs to be changed and rendered more precise. What is disorderly for Joe is not necessarily disorderly for Jill.

Finally, Cohen notes “There is no law against Contempt of Cop.” But he is wrong here. There is clearly an unwritten law against such contempt, for contempt of cop is clearly contempt of those who cops work for: the wealthy, the powerful, the oligarchs.
Posted by G. Tod Slone at 3:29 AM 4 comments: