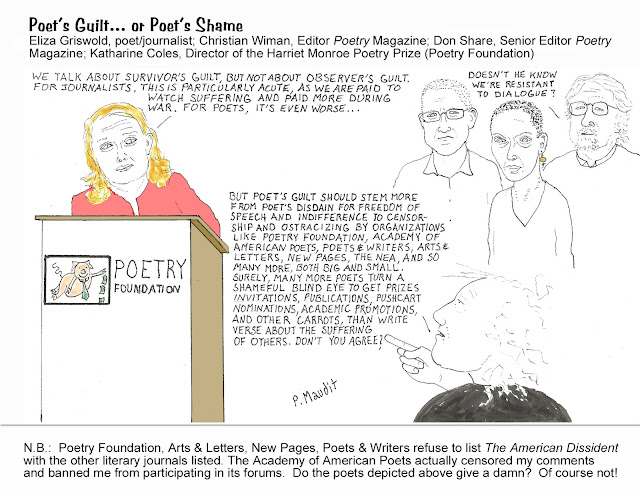 
A satirical cartoon on Poetry magazine (Eliza Griswold) is currently posted on The American Dissident blogsite (seewwwtheamericandissidentorg.blogspot.com).  Will you actually be curious… or like most average-Joe poets incurious?   Of course, I’ll probably never know.  No matter.


The fundamental flaw with Poetry magazine is that its editors refuse to publish harsh criticism with its regard, as well as with that of the established-order poetry milieu in general.  Byron and Pope hit the poet laureate of their time with sledgehammers, but Poetry mag would never publish poems like theirs today relative to one of our laureates.


The PC-multiculti dogma reigns at Poetry, where ostracism and banning under the guise of moderation are currently effected.  Apathy to ostracism and banning has become a pitiful trait of today’s poets.  The Academy of American Poets not only censored my comments after having posted them, but also banned me, a poet, from participating in its poet forums.  Do you care?  It is highly unlikely that you do or, at best, would justify the censorship and banning.   Poetry Foundation has ostracized The American Dissident from its vast network in refusing to list the journal with other literary journals listed.


In a nutshell, censorship, banning, and ostracism form your protective cocoon, making it happy-face bland and PC safe.  You represent that shameful aspect of far too many poets in America today.
Posted by G. Tod Slone at 9:05 AM No comments: 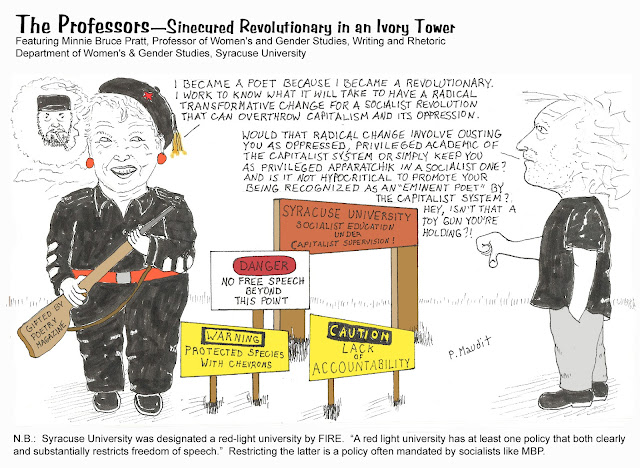 N.B.:  Not one of the 20 or so professors I contacted, as predicted, responded.  However, the student newspaper editor was quite refreshingly responsive and published a slightly truncated version of the following open letter in The Daily Orange.  There is hope!  My thanks to Editor Meghin Delaney for her extraordinary openness and respect for vigorous debate, cornerstone of democracy.

An Open Letter to the Professors of the Departments of Women's & Gender Studies and Writing and Rhetoric, Syracuse University:
The citizenry is drowning in hagiography, which is why I make it a point not to add to it.
One of your colleagues, Minnie Bruce Pratt, attracted my attention this week via Poetry Magazine.  Statements she’s made incited me to sketch a cartoon with her regard.  It is posted with this letter on The American Dissident blogsite (wwwtheamericandissidentorg.blogspot.com).  Hopefully, one or even several of you might actually be sufficiently curious to examine the uncomfortable truths depicted in it.  The crux of the criticism concerns Pratt’s assertion of wanting a socialist revolution.  But there she sits comfortably enjoying privilege under the current capitalist system, which also designates her as an “eminent poet.”  How strange, I’d thought:  a revolutionary with established-order chevrons and laurels.
The problem with the so-called women’s liberation is that purported liberators like Pratt have mostly been coopted by the established order, especially in the realm of politics and academe.  Hillary stands as prime example of that sellout.  After all, what does it matter if a hack is female or male?  Ah, but the old Sixties feminists a la Pratt are quite contented with their positions in the established order.  Hypocritically, they remain shamefully PC-silent regarding, for example, Islam’s inherent misogyny.  How disgusted I was to see the photo of feminist Hillary wearing a hiyad head scarf in full solidarity with misogynist Islamists!
On another note, Syracuse University, which pays you quite nicely (to turn a not-so-nice blind eye) boasts of being a bastion of freedom of speech (“Syracuse University is committed to the principle that freedom of discussion is essential to the search for truth and, consequently, welcomes and encourages the expression of dissent.”), while simultaneously and hypocritically restricts that very freedom (see http://thefire.org/spotlight/schools/1143).   For this, the Foundation for Individual Rights in Education designated the institution a red-light university.   “A red light university has at least one policy that both clearly and substantially restricts freedom of speech,” notes the Foundation.  Therefore, I ask why you have done nothing at all (turned a blind eye) to question and challenge—for the sake of your students!—that shameful situation, or if you have done something—and I’d be quite surprised—please let me know what the results were and inform the Foundation of your efforts.
Finally, my experience questioning and challenging academics over the past several decades underscores the likelihood that just one of you will actually deign to respond and engage in vigorous debate, cornerstone of democracy, is next to nil.  So, the true purpose of this letter is not to provoke a response from you—though hopefully it will educate you… a contrecoeur—, but rather to form part of the public record.  Thanks to the Internet, this criticism of you and your university will be posted.
BTW, this letter has also been forwarded to the student editors of The Daily Orange, though again my experience underscores that even they will likely be nothing more than your ideological shadows and will also likely not respond—thus has become higher education in America today.
PS:  Please do consider asking your library to subscribe to The American Dissident.  Your students might find the no-holds-barred, non-ideological criticism refreshing.  Perhaps, however, students are not your real top priority, despite the usual proclamations.  Institutional subscribers include Harvard University, Buffalo University, Brown University, John Hopkins University, University of Michigan, University of Wisconsin, Endicott College and, amongst others, New York Public Library.
Thank you for your attention.
Posted by G. Tod Slone at 10:59 AM No comments: