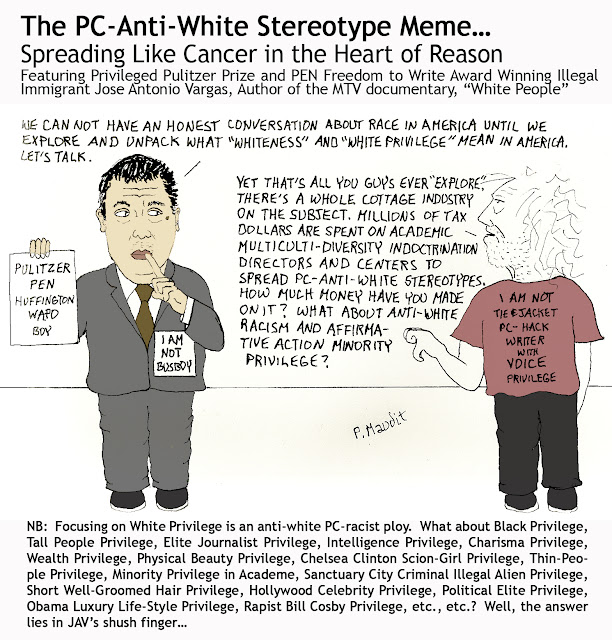 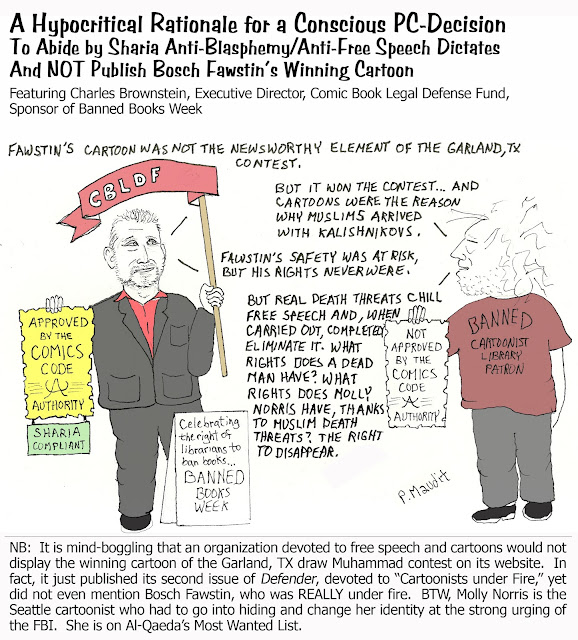 How to explain a purported defender of free speech, who rationalizes why he should NOT defend free speech?  Charles Brownstein did NOT respond to my letter (sent a year ago) regarding the banning of my speech, cartoons, books, and person from a public library... yet is a co-sponsor with the American Library Association (equally apathetic) of Banned Books Week.  How to explain that egregious hypocrisy?  See letter below:

Irony and Hypocrisy in the Ranks of Advocates for Freedom
We have hypocrites in politics.  No surprise there.  We have hypocrites in higher education.  No surprise there either.  But we also have hypocrites in the ranks of those professing to be advocates for freedom.  Now, that ought to be surprising... or perhaps not, considering the ever-increasing potency of  political indoctrination.
Is it not ironical that some (perhaps most) of the very establishments that promote Banned Books Week are either banners of books (City Lights Book Store will not stock copies of The American Dissident) or apathetic when books they don’t like are banned?  Is it not equally ironical that some (perhaps most!) of those who attend “Banned Books Discussions” like the one to be held on September 23rd at Sturgis Library don’t give a damn when books are banned in their own backyards?
On June 19, 2012, Sturgis Library director Lucy Loomis PERMANENTLY BANNED not only The American Dissident and any books I’ve authored, but also me and the ideas of those published in The American Dissident.  On that nefarious day three cops showed up with the director in the room, where I was quietly working alone on my online college courses, to escort me out of my own neighborhood library without warning or even possibility of due process.  Imagine that not one library director in the entire Clams Library System of Cape Cod would protest against that authoritarian decision.  Not one town counselor and not one local human rights commissioner of the Barnstable County Human Rights Commission would do so either!
Yet I’ve never made threats, never made any disturbance in that library, and I'd been going to it almost every day for two years!  What I did, however, was question and challenge IN WRITING, one week prior to the decree, Loomis’ hypocrisy regarding, especially, her written statement, borrowed from the American Library Association’s “Library Bill of Rights,” that “libraries should provide materials and information presenting all points of view.”
Loomis refused to present me with a written document describing the reason for her decision.  The library trustees refused to do that and also refused to present me with documents with its regarding.  It took the Massachusetts State Secretary of Records nine months later to order the library to make its records available to the public since it determined the library was not only being funded by the public but was clearly serving a public purpose.  In those records, only an indirect comment by Loomis to Ted Lowry, president of the library trustees, indicated the reason for the decision:  “Because of his behavior when the police were here they almost arrested him -- he can go from calm to extremely agitated in a matter of seconds.  So l believe this is the correct decision for the safety of the staff and public.”
Yes, I was quite pissed off when I saw three cops enter the room with Loomis!  I hadn't even spoken to anyone in the library for a week.  And yes I was quite pissed off when one of them actually grabbed my arm, twisted it behind my back, and frisked me!  Hell, I’m 66 years old and not a big guy.  And I was not making threats in any way whatsoever.  Ah, but it turned out that he was the training officer and showing a new recruit how to frisk a citizen.  I have no record of violence whatsoever.  In essence, Loomis played the he-makes-me-feel-uncomfortable card... because he actually challenged my ability to be a director.  Since that nefarious day over two years ago, if indeed I were such a danger to the staff and publc, why have I done nothing at all to harm the staff and public?  So, here I am today with an almost-arrested police record for the crime of manifesting a little anger in public… and PERMANENTLY punished for it.
Since that nefarious day in June, I’ve contacted scores of organizations.  To date, not one of them proved sufficiently concerned to offer to help me or even write a simple letter to the director, requesting she rescind her authoritarian decree.  Not even the ACLUM would lift a finger!  To date, not one of the sponsors and endorsers of Banned Books Week has been willing to do that either!  So, American Library Association, PEN (PEN New England won't even respond to my emails), National Coalition Against Censorship, National Council of Teachers of English, American Book Sellers Association, American Booksellers Foundation for Free Expression, American Society of Journalists and Authors, Association of American Publishers, Freedom to Read Foundation, National Association of College Stores, Comic Book Legal Defense Fund, Project Censored, and Center for the Book at the Library of Congress, why the hell not?