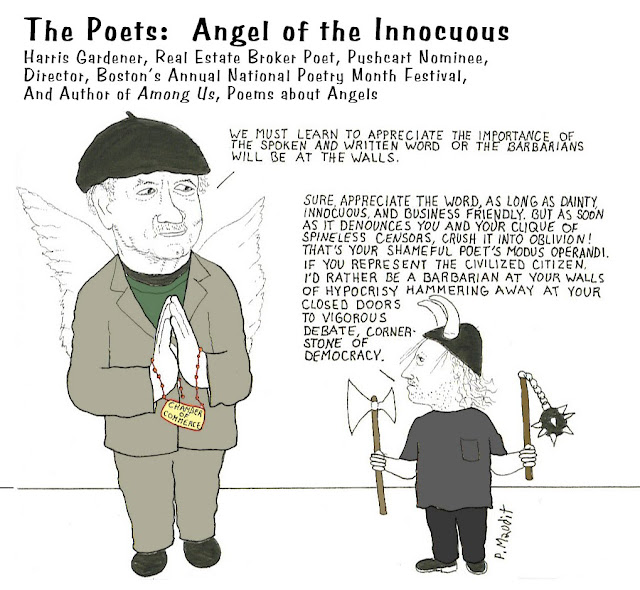 Harris Gardner, Another Little Caesar CensorAbout a decade ago I met Harris Gardner at the Jack Kerouac Festival in Lowell. I was manning a table for The American Dissident in the small press area. Gardner and Jack Powers were the bosses of that area. I recall Gardner sneering down at a book I had on the table: FUCK MASSACHUSETTS. He chatted with Powers. Both questioned me as to whether they should permit me to keep the book there because, well, it might anger their puppet masters. Gardner is one of thousands of little caesar censors in the literary world. His principle concern is obtaining cash from the state politicos so he can dole it out to his literary cronies.

What of course viscerally disgusts me about Gardner, besides his evident disdain for vigorous debate and democracy, are his hypocritical statements. “The poets are today’s prophets,” he blathers. “Poets should be examples of social consciousness, and awareness.” But awareness of what? The viewpoint discrimination effected by the likes of Harris? And what is social consciousness, being conscious of PC and its nefarious campaign of censorship and indoctrination?

“Political poetry is only a problem when it becomes a rant,” he continues. Rant, of course, is key! Anything apt to expose Gardner's hypocrisy would have to be dismissed as RANT!

“If it is done well, it still is poetry,” he states. Done well? But according to whom? The real-estate-broker, friend-of-the-Chamber-of-Commerce Gardner?

“You can have political poetry that uses metaphor without shaking a fist in someone’s face,” he argues. But how not to “shake a fist” in his face? And who would want to hide the fist behind metaphor?

To be invited to read at the Boston National Poetry Month Festival, one has to actually pass Gardner’s “audition,” as he terms it! Am I fucking dreaming? How did it ever get so rotten in the world of poetry? Where the fuck are the other barbarians? With flaccid bagel-bards like Gardner at the helm, the barbarians should be storming the gates in hoards!
Posted by G. Tod Slone at 2:53 PM 13 comments: 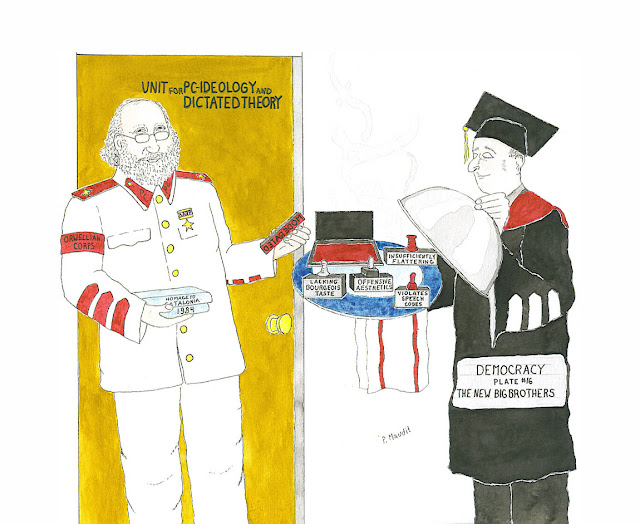 CENSORSHIP and the President of the AAUP
The history of intellectual growth and discovery clearly demonstrates the need for unfettered freedom, the right to think the unthinkable. Discuss the unmentionable, and challenge the unchallengeable. To curtail free expression strikes twice at intellectual freedom for whoever deprives another of the right to state unpopular views necessarily also deprives others of the right to listen to those views. [...] If a university is a place for knowledge, it is also a special kind of small society. Yet it is not primarily a fellowship, a club, a circle of friends, a replica of the civil society outside it. Without sacrificing its central purpose. It cannot make its primary and dominant value the fostering of friendship, solidarity, harmony, civility, or mutual respect. To be sure, these are important values; other institutions may properly assign them the highest, and not merely a subordinate priority; and a good university will seek and may in some significant measure attain these ends. But it will never let these values, important as they are, override its central purpose. We value freedom of expression precisely because it provides a forum for the new, the provocative, the disturbing, and the unorthodox. Free speech is a barrier to the tyranny of authoritarian or even majority opinion as to the rightness or wrongness of particular doctrines of thoughts.
—Woodward Report to the Fellows of the Yale Corporation (1975), which set a standard for freedom of expression at Yale and for the rest of the nation

Inside Higher Ed, an online academic publication, has been CENSORING my voice for several years (see http://www.theamericandissident.org/InsideHigherEd.htm). There’s not much a staunch individual like me can do to contest incidents of censorship. Last year, I informed Cary Nelson, tenured English professor and president of the AAUP, that my opinion regarding his IHE essay had been censored. Nelson did not respond. Yet, Nelson is the author of No University Is an Island: Saving Academic Freedom. That's right: SAVING ACADEMIC FREEDOM! So, how does he define academic freedom? The freedom to be PC indoctrinated? The freedom to CENSOR and condone CENSORSHIP?
Thus, I satirized Nelson in the above cartoon. The only thing a lone free-speech advocate can do against the Nelsons (and Ledermans) is satire and posting blog entries. Fortunately, posting such entries enables recusant voices like mine to be "heard" on the Internet. Thus, when someone googles Doug Lederman (editor of InsideHigherEd.com) or Cary Nelson, he or she will eventually find my CENSORED opinion. Both of those fellows, if they had it their way, would likely desire to "filter" or "moderate" all such opinions on the Internet. Thankfully, they do not yet have their way. One day, I suspect, however, they will have their way as the cloud of PC Big Brother and Big Sister gets larger and larger.

Both Lederman and Nelson have been duly informed about this blog entry. Below is the harsh comment I tried unsuccessfully posting on Inside Higher Ed regarding Nelson’s self-serving, book plugging essay, “Solidarity vs. Contingency” (see http://www.insidehighered.com/views/2010/09/07/nelson), which makes him appear to be on the side of the “working” academic and further enhance his “tenured radical” image. But he is one of those riding on the comfy bullet-proof academic gravy train, a "successful" academic ladder climber. The comment below contains no threats, no four-letter words, and no pornographic images. It is thanks to the Ledermans and Nelsons that higher education has become anything but an arena for vigorous debate, cornerstone of democracy.

Inside Higher Ed Censored Comment
It is difficult to believe in the sincerity of a Cary Nelson who perhaps earns upwards of $100,000 per year as a full-time tenured English professor at a big university teaching perhaps six measly courses per year, if that. It is indeed difficult to believe in an academic ladder climber, who once was a hippie. Indeed, how facile for Nelson to proclaim solidarity and equity, while enjoying what inequity and lack of solidarity have accorded him as a professor over the years: a life-time pass on the ivory-tower gravy train. Would Nelson be willing to scale down to the $20K per year those like me earn as adjuncts? Doubtfully. Would he be willing to give up just half his big salary, teach a few more courses, and spread the cash equally amongst adjuncts at his particular university? Now, that would be more than mere socialist feel-good jabber!
“Why congratulate ourselves for selling out?” asks Nelson, though I’m not convinced he realizes the depth of that selling out. And how to trust someone like Nelson who will not even stand up to decry censorship in academe? The last comment I’d posted regarding one of his articles was censored, and in vain I’d brought that to his attention. Nelson simply did not respond. Was I, an unconnected adjunct, simply naïve in thinking he might respond?
Nelson’s proclamation is as unrealistic and unattainable as it gets. The future is not in tenure and the cocoon security and salary that tenure affords professors. The future is online and the future is adjunct. I am happy with that situation because if it did not exist I would be without employment today. The Nelsons would certainly not be writing me three letters of recommendation or otherwise backing my quest for tenure. The AAUP and state college union stood idly by when I once fought corruption in the ranks.
Nelson’s comparison of adjuncts with sharecroppers is pitiful nonsense. Adjuncts are educated, while sharecroppers clearly were not. Adjuncts do not toil in unsanitary, menial, and physically exhausting hardcore labor. Adjuncts can seek employment in other spheres, while sharecroppers generally were stuck. Nelson belittles the tough life of sharecroppers by making such a comparison! One would have to believe that he’s never known the tough life of physical labor.
Unfortunately, I could not bring myself to finish reading Nelson’s lengthy article, stopped where he plugs his book, and wondered what he’ll be doing with the cash from book sales. Will he be refurbishing his little wainscoted luxury apartment or expensive home?
The problem with academic freedom is that tenure tends to be granted to those who would never speak out of line to begin with. In other words, it tends to be wholly unnecessary. Tenure tends to be awarded to those who play the game—to those who kowtow to the department chairperson Nelsons in power. I’ve seen it. I know it. Tenure has become in itself a rot in the heart of democracy, for it is a sham, a risible front. With all the tenured professors in the nation’s colleges and universities, how not to wonder why free speech and vigorous debate, democracy’s cornerstones, seem ever to be in peril in those very colleges and universities (see thefire.org). Indeed, it seems the tenured professors themselves are bent on keeping it that way. Yes, students, burn and steal those conservative newspapers! Yes, students, heckle that conservative speaker so he can no longer be heard! We’re in full solidarity with you. A-men.
Posted by G. Tod Slone at 6:09 AM No comments: 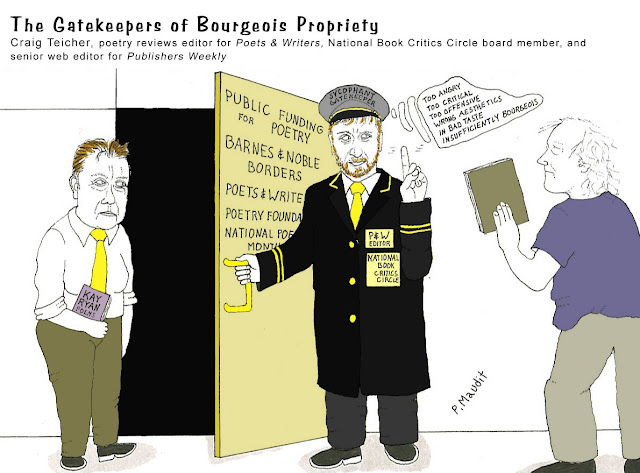 A BAS LA CENSURE ET LES CENSEURS!
Posted by G. Tod Slone at 5:01 AM No comments: