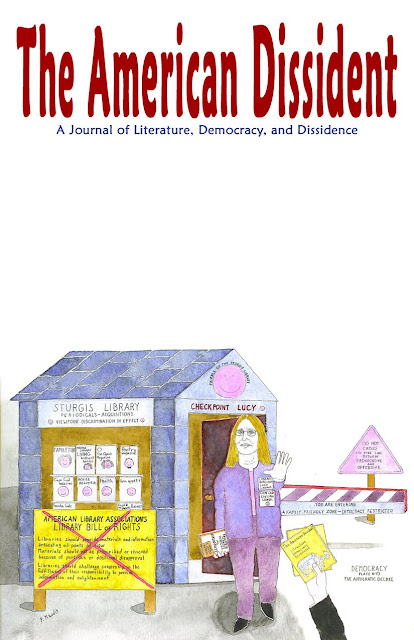 Lucy Loomis stands as an example of an authoritarian gatekeeper. She banned an American Dissident broadside and even banned me from discussing the banning with library staff. For this, she is mocked on the front cover of the latest issue of The American Dissident. The banned broadside follows.

An American Dissident Free-Speech Broadside (distributed 02/14/2011)-
The American Dissident, a 501 (c)3 Nonprofit Journal of Literature, Democracy & Dissidence, Offering a Forum for Vigorous Debate
G. Tod Slone, PhD, Editor (todslone@yahoo.com) (www.theamericandissident.org) 217 Commerce Rd., Barnstable, MA 02630
Open Letter to the Director of the Sturgis Library, Lucy Loomis
Libraries, far from being bastions of democracy, tend to be de facto opponents of free speech
Truth, it seems, is always bashful, easily reduced to silence by the too blatant encroachment of falsehood.
—Aleksandr Solzhenitsyn, The Gulag Archipelago
Gatekeepers are authority figures who seek to limit the choices of others. Gatekeepers are good at justifying their actions through circular reasoning.
—Chris Guillebeau, The Art of Non-Conformity

Sturgis Library is primarily viewed as a reservoir of genealogical and/or history sources.

Considering the number of publications such as yours do you consider it some form of censorship every time a library fails to purchase a subscription?