And, perhaps most importantly of all, [these rights] include the right to voice our opinions freely and to publish them without hindrance.  Yet freedom of speech is under attack today all across Europe. I have experienced the full brunt of it in my own country, Austria...
—Elisabeth Sabaditsch-Wolff

Here in America, one might of course say the same thing.  Far too many faceless little-caesars like Daniel Santos, Betsy Newell, Eleanor Claus, and Lucy Loomis remain willfully ignorant of citizen rights and are bent on limiting those rights and punishing anyone who dares actually exercise them.

My right to voice my opinions freely and publish them without hindrance was clearly violated by those faceless little-caesars, each of whom firmly backed the decision to have me permanently trespassed from Sturgis Library without warning or DUE PROCESS on June 19, 2012. 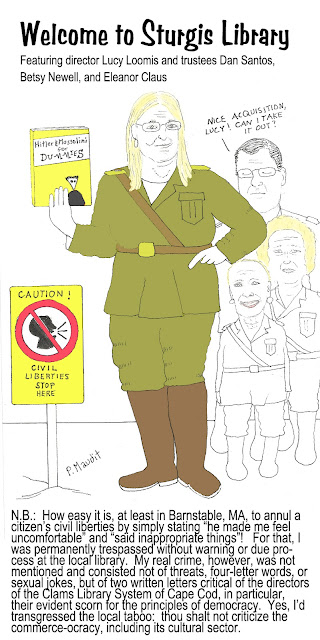 From: danielsantos@comcast.net
Subject: Re: Criticism of Cape Cod Librarians
Date: Mon, 11 Jun 2012 10:35:29 -0400
To: todslone@hotmail.com
Dear recipients of Todd Sloan’s email.
Preface: I speak for myself and not as the representative of any organization.
Mr. Sloan is correct in that he is unlikely to get a response to his rant. If one must yell to be heard then the message likely carries little substance. Mr. Sloan wallows in bloviating (Thanks, Mr. Will) self-interest. If his publication has value than those with interest will find it.
At last year’s Barnstable Village 4thof Julyparade and festivities, Mr. Sloan walked around the village as a human billboard, sporting the “F” word.Apparently being offensive is another tactic in his arsenal to garner attention to himself. He is no more than an exhibitionist engaging in intellectual masturbation. No wonder his message is falling on deaf ears.
Dan Santos
...................................................
Rebuttal of Daniel Santos' Email
Santos contradicts himself by arguing he speaks "not as the representative of any organization" because he is clearly a representative trustee of Sturgis Library, which receives public funding.
The RANT Santos mentions is really nothing but his own RANT: "Libraries should provide materials and information presenting all points of view and Materials should not be proscribed or removed because of partisan or doctrinal disapproval."
Why is it a RANT? It is a RANT because HE and Sturgis Library do not even believe in their own statement.  After all, if they did, they wouldn't have permanently banned my viewpoint and me from its premises.

Oddly, Santos has not been sufficiently educated to be able to understand this egregious contradiction, which is why he dismisses it as a RANT.
Of course, it is in my "self-interest" to fight for my rights as a citizen in a democracy, especially when those like Santos seek to eliminate them.
Santos, former chairperson of Barnstable Municipal Airport Committee, willfully remains ignorant of America's First Amendment. "Being offensive," as he puts it, is in fact expression protected by the First Amendment.  Santos cannot understand that offensive for him might be valid criticism for me, and vice versa.  He chooses to remain willfully ignorant.
His paucity of education can only explain his inability to understand that my "offensive" message was a message in support of the First Amendment. CELEBRATE THE FIRST FUCKING AMENDMENT, NOT COMMERCE. That was my "billboard." Santos would of course much rather celebrate COMMERCE, which was why he was so offended by the "billboard."
Santos would never think of celebrating the First Amendment on July 4th. All he can think about is COMMERCE.  Santos and so many others like him seek to weaken, if not eliminate, the First Amendment.

Library Director: Oh... I thought—when we celebrated banned book week—we were celebrating the banning of books and individuals, and those who banned them.

Tim,
Brilliant idea for a cartoon! Thanks. I'm going to do it!
G. Tod