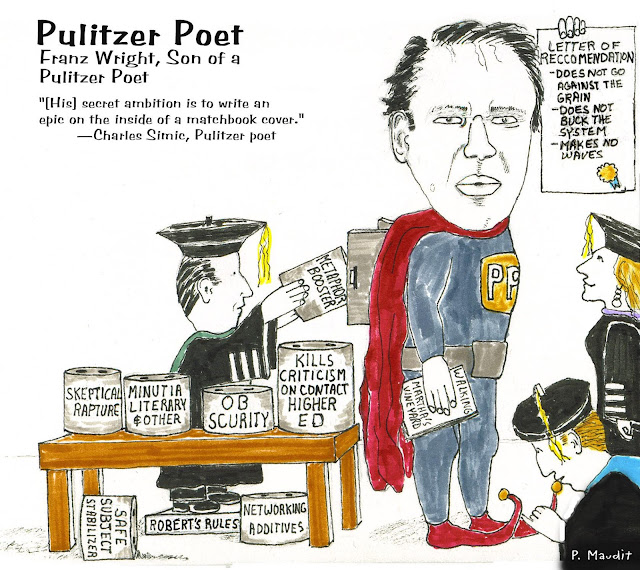 Why Poetry Doesn't Matter--Yet Another Example...

Above is a cartoon I sketched in 2004 on Franz Wright, who actually paid me $10 for a copy of it in person at the Emerson Umbrella for the Arts (ah, but not for my arts!) building when he saw me with signs and flyers protesting his scheduled reading at Concord Poetry Center.  He chuckled and never did comment on it.
I thought I should post it here for the record, since Wright just croaked.  "Award-winning poet" Michael Dickman presented his blind-poet accolade write-up in Time magazine (6/1/15).  "Award-winning" poets like Dickman and Wright of course rarely, if ever, possess the individuality to question and challenge the academic/literary established order machine handing out the prizes and accolades.   Dickman, in a typical outpouring of hyperbolic lit-dysentery, states "Franz Wright was a haunted and passionate poet, creator of some of the most devastatingly beautiful and dangerous poems written in English in the past 50 years."  Sadly, MFA poesy students will likely swallow the shit without questioning it.  And Dickman evidently needs a dictionary to look up the term "dangerous."
"The hole he leaves in contemporary American poetry will not, as Wright once wrote, be 'scarlessly closing like water' anytime soon," concludes Dickman as if somehow making an objective statement, which sums up the entire canon-making machinery, which inevitably performs its hocus-pocus and voila subjective becomes objective.  Just swallow and say ahh, just like Dickman has been doing all his life right up the ladder to the safe penning of a Time mag obit hagiography.  Dickman, by the way, briefly responded to my critique of his hagiography (see below for correspondence).  I'd mistakenly written that Charles Wright, current Lit-Innocuity-in-Chief aka Poet Laureataster of the US Congress, was Franz Wright's father.  In fact, the two are not related.  Sadly, that was all Dickman had to say.
Regarding my Concord protest, Franz Wright, of course, unsurprisingly, did not give a damn about it, and I doubt he possessed the capacity to understand the cartoon he'd purchased.  The protest concerned, not just him, but also the Concord Poetry Center, who's director, Joan Houlihan, had aberrantly stipulated that if I stood before her center in protest, she would not permit me to teach a workshop on dissident poetry and poets.  Where most poetasters like Wright would probably have said, well, ok, I won't protest, I certainly did not.  Below is the letter I wrote to Wright, who never responded...
.....................................................................
October 17, 2004
Franz Wright, Pulitzer Poet
74 Parmenter Rd.
Waltham, MA 02453

Dear Franz Wright:
We met Saturday night quite briefly (see my poem on that encounter).  I was/am the lone poet protester of Concord (I spent a day in a Concord jail for protesting the absence of free speech at Walden Pond several years ago).  Wouldn’t it be nice if we could all dialogue, rather than chuckle at each other?  Wouldn’t it be nice (generous) if the academic lit journals, workshops, classes and poetry centers opened their scope to other possibilities and even manifested CURIOSITY?  Yes, I am aware that you are not an academic… but I suspect, if you are not already, you shall soon be with workshop opportunities, adjunct courses, and offers of tenure from the nation’s poetry department heads.

Anyhow, enclosed is a copy of the literary journal I created as a result of academic corruption at Fitchburg State College (MA).  I was a professor there (5 years) and am now a blacklisted unemployed professor with a PhD… for whatever that is worth.

Enclosed also is a self-published chapbook (who else would ever publish such a thing?) of my poetry and especially my literary manifesto.  The latter is what I’d really like you to examine.  Over 40 academic journals have rejected it.  I thought it might be interesting if you simply contemplated for a moment how impossible it is for a dissident poet to find a publisher in today’s society.  Indeed, recently reading Solzhenitsyn’s The Oak and the Calf, I could not help but compare America’s Academic-controlled literary scene (the Academic/Literary Industrial Complex) with that of the Soviet Writer’s Union.

Thank you for helping to support The American Dissident with your $10 contribution.

To Michael Dickman, (Academic) Lecturer in Creative Writing, Lewis Center for the Arts, Princeton University:
Yesterday, I read your obit on Franz Wright, while waiting for my car inspection at Toyota.  My comments with its regard, including a cartoon I’d sketched on Wright ages ago, have just been posted on my blog site here:  wwwtheamericandissidentorg.blogspot.com.  Why not take a gander.  After all, as I've always said, curiosity did not kill the cat, careerism did that.
In fact, why not manifest unusual openness and expose your creative-writing students to it?  Pipe dream?  Most likely, and despite the following deceptive statement of implied inclusivity:  “The Lewis Center for the Arts is designed to put the creative and performing arts at the heart of the Princeton experience. This mission is based on the conviction that exposure to the arts, particularly to the experience of producing art, helps each of us to make sense of our lives and the lives of our neighbors.”
Ah, but which “creative and performing arts” are to be included… and which are to be excluded… in the name of inclusivity of course? Which poets are to be included and which shall be excluded?  Do you teach your students that?  Do you teach them to question and challenge the lit canon?  Do you teach them to wonder about the faceless judges concealed behind the scene who choose this poem but not that poem?  Do you teach them to wonder why those faceless Pulitzer judges chose Franz Wright?  Did they choose him because he was harshly critical with their regard?
Finally, why not get Princeton to subscribe to The American Dissident (only $20/year) or better yet order copies for your students.  After all, where else might they read criticism of lit icons and their acolytes?  Where else might they be able to examine satirical cartoons, poems, and essays on those like Wright… and even you?  Harvard, Yale, Johns Hopkins, Buffalo, and a few other universities thankfully subscribe.  To date, only one professor has been willing to open up his classroom to opposing viewpoints and invite me to speak about The American Dissident.  Professor Dan Sklar (Endicott College) has been doing that for almost five years now.  For all student comments, see http://theamericandissident.org/students.html.

Michael,
I stand corrected!  I always thought he was the father.  Somebody must have told me that a while ago.  I shall note on my blog that I erred.  Now, too bad you are not OPEN to different viewpoints... too bad for your students.
G. Tod