Cloaked (College-as-Usual)
“My name is Matt.  Please join me in this conversation,” notes Matt Jennings, editor of Middlebury Magazine in his brief editorial, “Uncloaked.”  Of course, I’ve heard that one before.  Sadly, the term “conversation” seems to have become code for "ideological monologue," as in the let’s-have-a-conversation-about-race monologue.  Orwellian inevitably comes to mind, as I leaf through Middlebury Magazine, alumni mag of Middlebury College.
“Inclusion!”  It seems PC-mimicry has become well-implanted at the college, where the “conversation” will not likely include Middlebury’s terrible speech-code rating, especially regarding its Anti-Harassment/Discrimination Policy (see the Foundation for Individual Rights in Education, https://www.thefire.org/fire_speech-codes/middlebury-sexual-harassment/).  Needless to say I brought that up a while ago to the deaf ears of the editors of New England Review and Middlebury Campus (the student newspaper), as well as to the previous editor of Middlebury Magazine.  For me, it is incomprehensible why the vast majority of magazines and newspapers tend to knee-jerk reject criticism with their regard.  In each and every issue of The American Dissident, which I publish and to which the MC librarian refuses to subscribe, I include the harshest critique lodged against me and the journal.  What’s the big deal?  Well, those editors should look into the mirror and ask themselves that very question.
Yes, “please join me in this conversation,” notes the college's interim Chief Diversity Officer Miguel Fernandez.  And yes, “what it means to be inclusive.”  Well, of course, that’s an easy question!  Inclusive means to exclude freedom of expression when those in power do not like that expression.  BTW, who is the college's Chief Democracy Officer?  Oh, it only has a Chief Diversity Officer?  I see.  Diversity (i.e., not of ideas, but of superficial skin color and ethnicity) is far more important than democracy (i.e., free speech and vigorous debate) at Middlebury!  Now, imagine the PC uproar if President Laurie Patton decided out of the blue to actually be original in academe and establish the first college Chief Democracy Officer!  Oh yeah, just a 60s pipedream.
Now, what in tarnation does Patton's “collective community ownership of inclusivity” mean?  Not even Orwell himself could have come up with such a term!  Hmm.  Yes, “we need to engage in discussion,” notes Fernandez, but only as long as that discussion excludes social-media misunderstandings of his understanding.  Hmm.  Anyhow, My name is Tod.  Please join me in this conversation.

[Sadly, though quite predictably, nobody was willing to do that, not Fernandez, not Patton, not Jennings, and not the editors of those other rags, all of whom were sent this “let’s have a conversation addendum…] 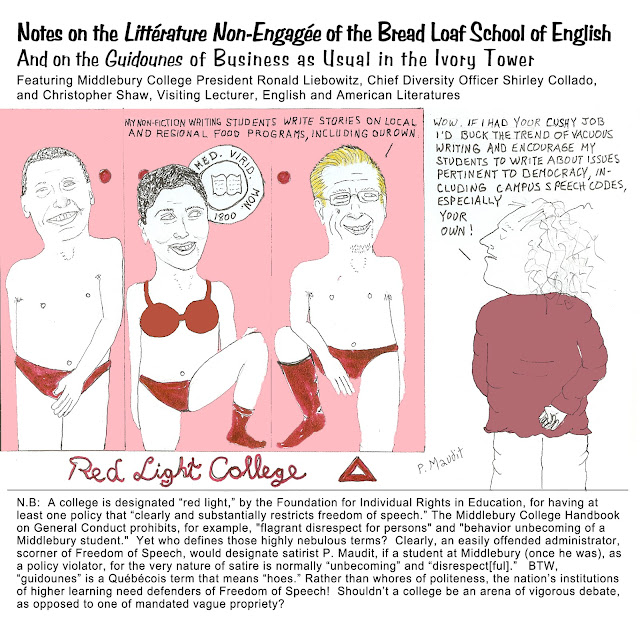