Hypocrite at the Helm:  Jeanie Hill
In 2015, I requested a review of the permanent no-trespass order in effect against me since 2012 in accord with Sturgis Acceptable Behavior Policy: “Patrons whose privileges have been revoked may have the decision reviewed by the Board of Library Trustees.”  Sturgis Library did not respond to that request.  Several weeks ago, I again made the request, though noted this time I’d be informing the Barnstable County Human Rights Commission.  I received the following brief response, which essentially confirms that as a patron, I have a right to a review, but because there is an order in effect, I do not have a right to a review. Therefore the policy is hypocritical.  Therefore those who adopted it are hypocrites at the helm.  In essence, for a speech crime, I was convicted without possibility of parole, let alone due process.   Following the response letter is my response. 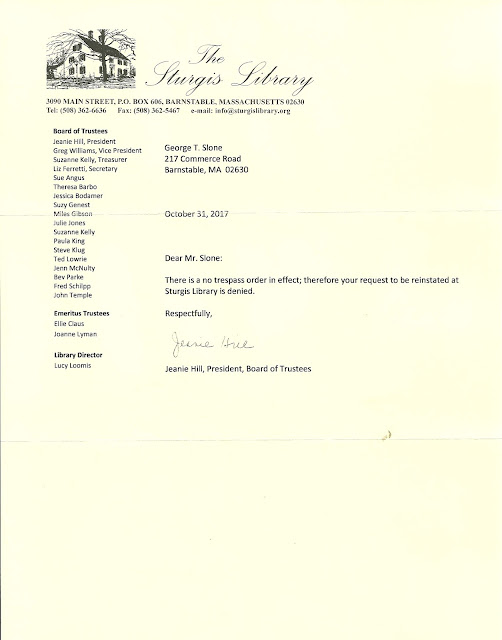 Well, I don’t even know if you’ll bother to read this letter, let alone receive it, for your personal email is not even listed on Sturgis Library’s website, nor is your photo.  Hey, how can I cartoon you w/o a photo?

Anyhow, thanks for your brief response:  “There is a no trespass order in effect; therefore your request to be reinstated at Sturgis Library is denied.”

Since the trustees did not respond to my 2015 request, I was surprised you responded at all, though suspect my mention of the Human Rights Commission might have pushed you in that kindly direction.

In essence, I do not need Sturgis Library… but nevertheless seek redress of a wrong:  no-trespass order w/o warning and w/o due process for the speech crime of having criticized director Lucy Loomis in writing one week prior to the order in 2012.

Oddly, as a patron or former patron, in accord with your Sturgis Acceptable Behavior Policy, I purportedly have the right to a review:  “Patrons whose privileges have been revoked may have the decision reviewed by the Board of Library Trustees.”  However, because there is a no-trespass order in effect, I do not have a right to a review.  Go figure!

To be honest, and I know that’s difficult for you and other hypocrites at the helm, why not replace “may” with “may or may not” in that statement to reflect reality?  But I suppose doing that would essentially annul the statement itself.  Why present a semblance of patron rights when clearly patrons cannot have rights under a director given free rein to dictate?  Can you grasp that simple thought?

Why therefore was that policy really adopted… and shortly after the no-trespass order issued against me?  Did the trustees feel the need, for who knows what reason, to present the library under a false light of democratic process?  Loomis is an autocrat.  As long as she or others of her ilk are in power, Sturgis Library will be autocratic, no matter what hollow policies you and she decide to adopt.  Can you grasp that?

Finally, is it not aberrant that librarians aren’t even interested in debate regarding their own policies, including your Collection Development Policy statement “libraries should provide materials and information presenting all points of view.”  That statement is a clear example of librarian hypocrisy.  After all, my point of view and those I publish have been permanently banned!  And of course you and Loomis will never address that egregious anomaly, for it is intellectually easier to simply avoid it and demonize the messenger as dangerous.

A patron like me will only have rights at places like Sturgis, if he does not question and challenge the hypocrites inevitably at the helm.  Or if he does question and challenge them, he will only have rights if he spends thousands of dollars for legal assistance.  In my case, I decided not to do that, though the thought of that possibility still remains, as I approach my 70th birthday…

Hats off to you for continuing to fight.