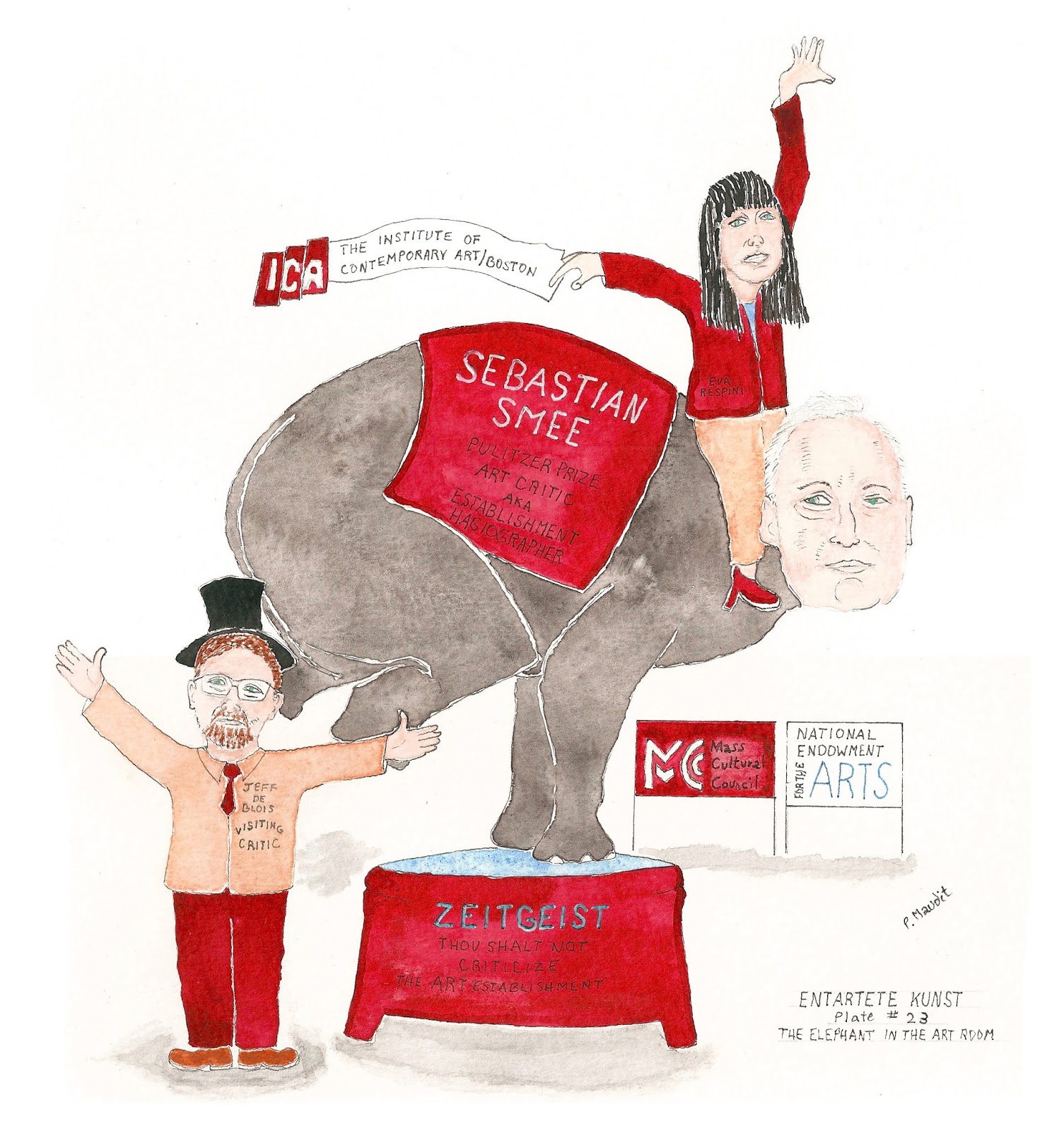 Notes on the Real Elephant in the Art Room
Sebastian Smee somehow manages to avoid the real “elephant in the room” (i.e., the art room) in his promotional essay, “Picking apart the Internet: An exhibition that addresses the elephant in the room,” regarding Boston’s Institute of Contemporary Art exhibit, “Art in the Age of the Internet, 1989 to Today.”
Smee lauds the exhibit artists—critic in today’s twisted art world tends to be a euphemism for hagiographer—as being “at the vanguard of questioning and critiquing—but also embracing and advancing—the Internet.”  However, when might they ever be “at the vanguard of questioning and critiquing” the art machine that tends to feed them so well, as opposed to ever “embracing and advancing” it?  That machine controls art, essentially coopting and castrating it.
“Today, our lives are at once eased and terrifyingly over-determined by algorithms,” concludes Smee.  “Algorithms promise to distill order from informational chaos. It’s a necessary project, and one they share, to some extent, with art.  But unlike art, algorithms don’t care about truth. They care about probabilities. There’s a very big difference. And that difference is one reason, in the Internet age, we need art more than ever.”
Yet since when is art so concerned about truth nowadays?  Doesn’t it care a lot more about recognition via backslapping and self-congratulating?  The entire art scene on Cape Cod where I live, for example, has become so commercial, so tourist dependent, that any artist daring to expose and otherwise criticize that uncomfortable truth would forever be banned by the art machine, which has become an arm of the chamber of commerce, hardly at all concerned with truth. Artists should stand up on their hind legs to test the waters of democracy, instead of beggaring at the doors of the chamber of commerce and its diverse arms like the Cultural Center of Cape Cod or the Mid-Cape Cultural Council or Cape Cod Writers Center.  Money kills art.  Money kills writing.
Now, how to evoke algorithms without even mentioning Google’s corrupt viewpoint discriminating algorithmic tactics and even more so the corruptly biased humans behind them!  But Smee certainly manages to do that.  For him, as an establishment “art critic,” the faceless (human-less) internet, a tool, is somehow that elephant in the room.  The reality, of course, is something Smee likely cannot and will not be able to perceive, let alone comprehend.  His job depends on that!  Prohibited:  art critical of the art machine!  Prohibited:  viewpoints the art machine does not like!
Smee notes the Boston exhibit “suggests that the Web’s technical possibilities and reality-altering nature have seeped into every aspect of creativity, affecting even traditional media such as painting and sculpture.”  But how might those algorithms serve to eventually eliminate hard-core questioning of art critics like Smee himself?  And when might chief curators like Eva Respini and Jeffrey De Blois ever contemplate an exhibit highlighting art critical of the Institute of Contemporary Art itself?
Art critics like Smee are part of that machine, cogs of it.  The elephant in the art room is not the freakin’ internet!  It is the art not present in that room, especially that art not funded by the NEA or state cultural councils or private MacArthur Foundation fellowship granters and not given a pass by museum curator gatekeepers.  It is the art that is too critical of the art room, the art machine, the NEA and state cultural councils themselves, and of course the multitude of sell-out artist cogs of the system.  Black art or anti-Trump art, for example, will certainly NOT be rejected by fund-according cultural-council apparatchiks and exhibition gatekeepers.  Art critical of those organizations and gatekeepers, however, will be flatly rejected, no matter how “brilliant,” for “brilliant” such art can never be.   The art machine is a great cooptation wing of the establishment in general, a great castrator of art itself.  Artists today seek to climb the ladder of recognition and know damn well that speaking “rude truth in all ways” (Emerson) would serve to brake that climb and otherwise kill their art careers.  Only an artist, a rare artist indeed, who does not give a damn about recognition and that dubious careerist path, will seek to speak that “rude truth in all ways,” especially regarding the art machine.


Question:  Would a Pulitzer Prize-winning art critic at The Washington Post dare criticize the Pulitzer Prize judges or WaPo editors?  Answer:  no!  Question:  Should I submit a collection of sketches critical of artists and exhibits to the Institute of Contemporary Art or would that be a waste of my time?  Answer:  waste of time!