The Death of an Oligarch

Above is a cartoon I drew quite a while ago (a decade probably). I like emphasizing some of the stupid things the famous say or write. It's not a great toon, surely not one of my best. But, hey, let's celebrate Teddy. It's the only one I've ever done of him, though I'm cogitating another one.

Below is a poem I just wrote. I've reworked it a number of times. The subject isn't easy to cover without getting too rhymy or insufficiently rhymy. Some rhyming is needed to render the flow reasonably smooth. No matter. It just came out. The emotion of barfing out what so many mindlessly ingurgitate serves as its catalyst.

The Death of an American Oligarch
The hagiography runs rife on the tube—
even the conservatives praise the dude,
while the populace congeals deer-eyed
before the dead Star of the moment.

The older brother had stepped down,
decades ago to become president;
so the younger one took over the seat,
while the father’s money would serve
to keep him as permanent resident.

The journalists pumped him up periodically,
while the citizenry, mouth agape,
swallowed the superficial swill of the dynasty.

So, now the dude’s finally dead, and the
question posed is not Term Limits
for the sake of democracy,
but rather who will take over the seat
of the family oligarchy:
the wife, one of the nephews, or Caroline Kennedy?
Posted by G. Tod Slone at 4:42 PM 1 comment: 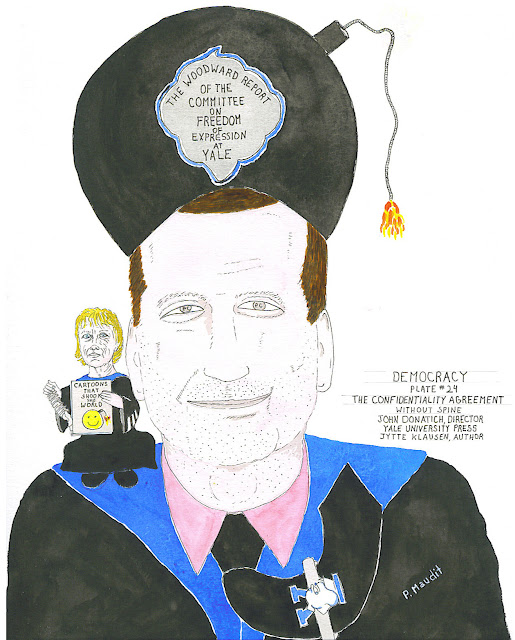 The sketch above depicts author Jytte Klausen sitting on the shoulder of Yale University Press publisher John Donatich, who is wearing a turban similar to the one depicted in one of those 12 famous Danish cartoons regarding Mohammed. I sent the sketch to him and to Klausen, whose book on the Danish cartoon affair was originally supposed to include those 12 cartoons.  Donatich, however, censored them.  He did not respond.  Klausen, however and to my surprise, did respond.  See below. Did she understand the sketch?  BTW, the Yale University Woodward Report is an excellent groundbreaking document on free speech and expression.  Too bad Yale seems to have placed the report in a dusty basement archive.

Dear George; I like your cartoon. Will you give me permission to use it one day? Of course I'll use it with the appropriate credit.

With Their Ilk in Power, How Not to Be Cynical? 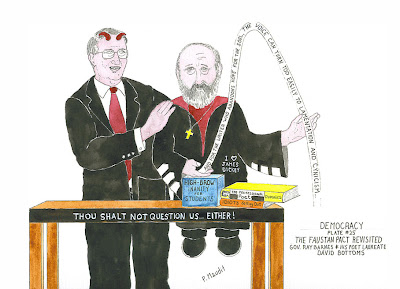 David Bottoms, Georgia poet laureate, looks the part of a 60s hippie sellout. The country today is run by sellouts from the 60s. Bottoms' Faustian pact enabled him to obtain numerous awards, not to mention tenure at Georgia State University. He disdains what he calls cynicism and thinks that nobody can write anything really good unless they truly believe in his fairytale god. George Bernard Shaw saw things quite differently: "The power of accurate observation is often called cynicism by those who don't have it." Evidently, Bottoms is lacking it because lacking it is an evident prerequisite for career success in academe. Like Bottoms, Bubba Clinton was always railing against cynicism. "This cynicism is my enemy," he'd said. Bob Woodward noted, however, that for Clinton “Cynicism” was, in part, a code word for media criticism. I suspect for Bottoms, cynicism is a code word for anything critical of the canon, academe, poetry establishment, and of course himself.

Word of this blog entry was sent to about a dozen Georgia State University English department members, including Bottoms. Who knows? One of them might actually respond, though experience dictates that to be highly unlikely. Professors will only debate if money is handed to them and/or if such debate might further their careers in our capitalist society. Kennesaw Review was also informed. 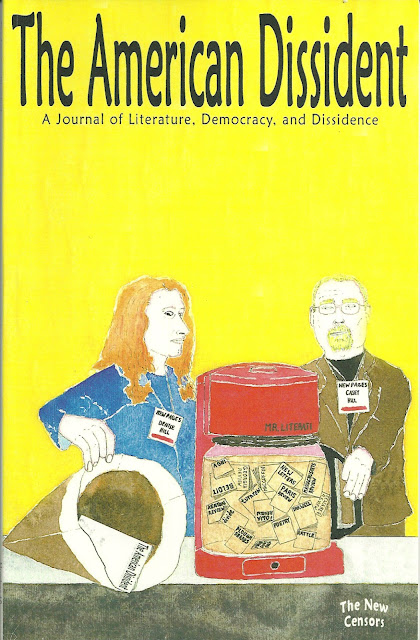 Depicted above is the front cover of issue #19 of The American Dissident, which was banned by NewPages editors Denise and Casey Hill.  NewPages.com lists literary magazines.  Thus, for its readers, The American Dissident does not exist.  Poets & Writers mag also banned the magazine.  I sent D&C a copy of the issue, but neither responded, not even a thank you! Utne Reader naively bills NewPages as "the web's alt-press playground." But it is really just another alt-press playground CENSOR. For the brief correspondence I had with the Hills, see www.theamericandissident.org/orgs/new_pages.html.
Here's a poem from the issue by David Ochs:

the time before when he’d read
he mentioned he’d written “in form”
taught to him by Dr. James Cushing
who teaches at the local university
the poor kid thought
Cushing was some kind of
mountain top poetry guru
and Cushing probably got
huge ego strokes
that the kid thought Cushing
could wave his magic wand
and turn him into the next Ginsberg
but the kid was so star struck
he didn't realize
how lousy and unreadable
Cushing’s poems are

the kid read all serious
but no one paid attention
Posted by G. Tod Slone at 6:13 AM 8 comments: 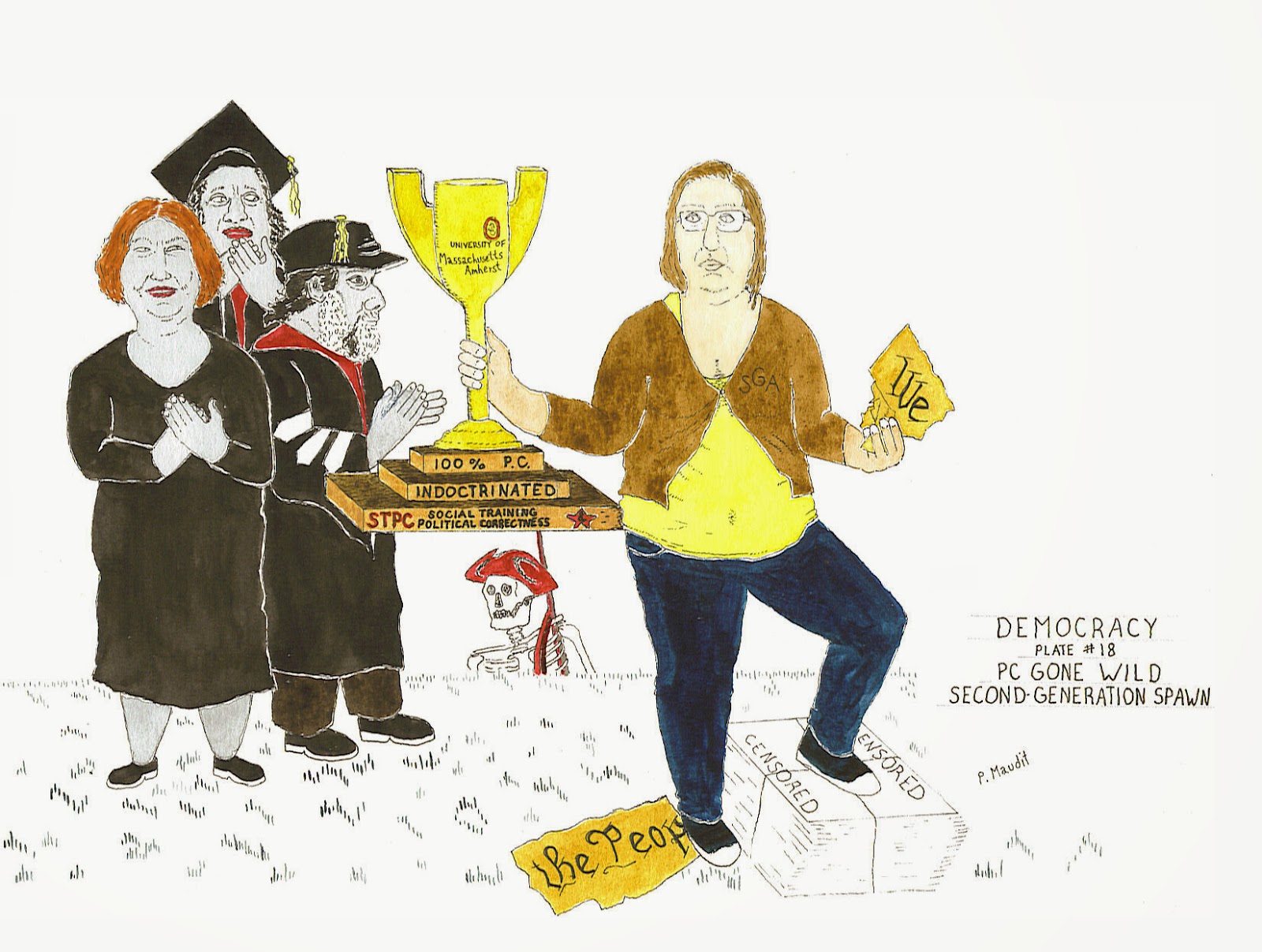 People must be protected from discrimination by virtue of their race, but you cannot ring-fence their ideas. The moment you say that any idea system is sacred, whether it's a belief system or a secular ideology, the moment you declare a set of ideas to be immune from criticism, satire, derision or contempt, freedom of thought becomes impossible. […] If we cannot have open discourse about the ideas by which we live, then we are straitjacketing ourselves.
—Salman Rushdie

To yield subjectively, not merely to a party machine, but even to a group ideology, is to destroy yourself as a writer.
—George Orwell, “Writers and Leviathan”

The Sixties and its many sellouts gave birth to the PC plague, which has since become entrenched in America (for a full history of the term, which actually predates the 60s, see http://en.wikipedia.org/wiki/Political_correctness). The plague's enemy is vigorous debate and logical argumentation. That enemy is the same for all ideologies, left and right. Criticize the plague and expect not logical retort, but rather ad hominem. Indeed, criticize it and be dismissed as a neocon, white supremacist, racist, sexist, or simply asshole. Criticize it and simply be ignored. That is the sad modus operandi of PC indoctrinees and their esteemed professors. PC tends to thrive virally in the nation’s colleges and universities. It also maintains a deep grip upon the literary milieu. National Poetry Month is PC-infected, for example.

Multiculturalism gone wild is part of the PC ideology and inevitably translates into white males need not apply, especially when they might be apt to question and challenge PC. As a white male, I’m disgusted to know that non-white non-citizens might very well be given priority over me for jobs for the simple reason of their non-whiteness. That occurred at Grambling State University where a female Mongolian with a green card (and ambassador father) was accorded priority over me for a position as French professor. I’d spent seven years in France and had a French doctorate. She’d spent a month in France and had a doctorate from a university in Louisiana.

For a listing and legal discussion of numerous examples of PC-infected colleges and universities, see thefire.org. At one college, North Shore Community College, I noticed: “Appreciation of multiculturalism required,” which clearly implied no discussion or other questioning and challenging of “multiculturalism” would even be permitted. I brought that to FIRE’s attention. Its lawyers wrote the college, and the college removed those words from its job ad. No doubt, however, the concept still remains firmly implanted in the brains of the administrators and faculty who enacted it.

It is constitutionally illegal for a public college to demand adherence to a particular ideology.

The Social Thought and Political Economy Program or STPEC (see illustration above), an interdisciplinary undergraduate program in Social and Behavioral Sciences at the University of Massachusetts at Amherst, stipulates on its website that it “encourages students to engage in a critical examination of society and to develop their own capacities for critical reading, writing, and thinking.” Yet it certainly does not encourage students to question and challenge the PC-mindset it seeks to promote. Indeed, what it does is encourage students to close the door to vigorous debate, cornerstone of democracy. That is precisely what happened at the University of Massachusetts this year. Student Vanessa Snow, majoring in Social Thought and Political Economy Concentration [i.e., Social Training and Political-Educationist Correctness], decided to close the door on debate by trashing the university’s conservative newspaper. She, model of university enlightenment, is a founding member of Student Bridges and has been an active student organizer on campus with the Student Government Association and ALANA Caucus, as well as state-wide with Massachusetts Students Uniting (MSU). She also currently holds the SGA position of Commuter Area Governor.

As far as I’m aware, few if any professors at all spoke out against Snow’s actions. Where was poet luminary Martin Espada, a tenured University of Massachusetts professor? Jabbering on NPR? Where was department chairperson Sara Lennox? Rooting wildly behind a tree or bush? Below is what Assistant Professor Ruth Jennison had to say about this blog entry. She is one of the U Mass professors I contacted regarding it. Likely and sadly, she is the rule, not the exception: "Please remove me from your list."
Posted by G. Tod Slone at 5:12 AM 6 comments: