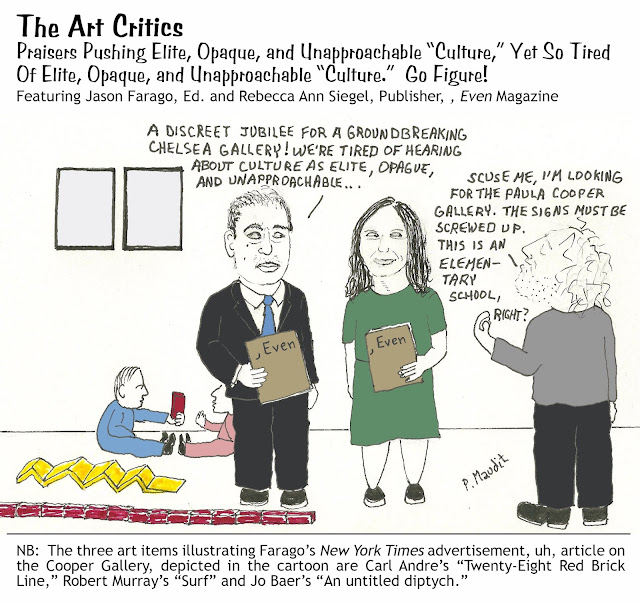 Art has become utterly risible.  “Groundbreaking” is the art hagiographer’s euphemism for “vacuous”!  Jason Farago’s New York Times advertisement, uh, article, “A Discrete Jubilee for a Groundbreaking Chelsea Gallery,” incarnates the sad situation, as does its sub-headline:  “Paula Cooper Gallery, a model of integrity in a market gone crackers, celebrates 50 years of art and activism with an exhibition featuring artists from its very first show.”  Integrity?  What might that constitute or simply imply?  Absolute melding into the art establishment’s m.o. of coop, castrate, and commend!  That’s what it means in the art world today.
The three images of the art, presented in the article, back the statement 100%.  How can one actually not laugh at Carl Andre’s “Twenty-Eight Red Brick Line,” which is precisely what it is.  And how about Jo Baer’s “An untitled diptych” (i.e., two framed blank white canvases)?  Robert Murray’s “Surf” looks like yellow plastic boards that go up and down, you know, like surf.  100% safe for the chamber of commerce and grant-according machine!
Farago begins his advertisement, uh, article by arguing that  “Many dealers have influenced art history through the works they’ve bought and sold, but only a very few have done something more profound: reshape how we see art and transform what we value.”  In other words, moneyed interests are the key determiners of what art has become… and transformers of “what we value.”  But who is “we”?  Well, “we” certainly does not include “me,” nor should it anyone else with an independent mind not anchored in the elite (moneyed) Chelsea art scene.  And of course one of the “very few who have done something more profound” includes the Paula Cooper Gallery, “defined by an embrace of music, dance and poetry, and by a political activism uncommon in galleries of its prominence.”
Farago describes some of the art pieces with fluffy, wordsmithy verbosity, as in “sequences horizontal, vertical and diagonal lines in various combinations across a grid; its austere precision still packs the same philosophical and visual bite” and “a pair of yellow aluminum zigzags nuzzle on the floor, like snakes in the grass offering a sly rejoinder to Donald Judd’s nearby matte brown aluminum box” and “a towering totem of red steel.”   Then Farago concludes, “Ms. Cooper’s taste has diffused throughout the world of contemporary art, her ethics and engagement have not — and what feels finest in this discreet jubilee is its vision of integrity in a mad, mad market.”  But where the “integrity” in all the descriptive fluff?  What does “integrity” even mean in that context?  Well, it means nothing… or, if it means something, then it means fully systemic/fully establishment (e.g., Cooper pushes the gun-control narrative at the exhibit).
When art becomes a commodity to be promoted by the New York Times or marketed and sold like stock on Wall Street, then art is in serious trouble.  And when artists and their praisers like Farago cannot bear to be criticized, then it is really in serious trouble.  It is truly pitiful that art critics today tend to be anything but critical of artists.  All they seem to do is promote establishment art and artists.  They’ve become lackeys of gallery owners and art organizations—arms of chambers of commerce and the tourist industry.  Sellouts!  Well, probably not that because likely they were never critical to begin with.  And indeed the only way to climb up the careerist art ladder and get published in newspapers like the New York Times is by not being critical…
………………………………………………..


NB:  Farago is editor of , Even Magazine, which aberrantly states:  “We’re tired of hearing about culture as elite, opaque, and unapproachable.”  Aberrantly because Farago’s article did nothing but add to the “elite, opaque, and unapproachable.”  The magazine stipulates, “Our serious, at times irreverent writing bridges the misunderstood gap between culture and the world.”  And yet Farago’s article was anything but “irreverent.”  Now, would Farago and publisher Rebecca Ann Siegel publish “Risiblement Coopté” in their magazine, let alone any of the numerous other anti-art-establishment essays I’ve written or anti-art-establishment cartoons I’ve drawn over the years?  Of course not!

To Lisa Leigh Connors, Ed., Cape Cod Magazine:
Just read last year’s Cape Cod Magazine.  Your “Easy Reading” article on “little free libraries” offering free books (June 2017) caught my attention.  Free, of course, has several meanings:  1.  no cost and 2.  liberty.  In the case of one of the libraries you featured in that article, Sturgis Library, liberty (i.e., freedom of speech) is not tolerated.

For expressing my viewpoint in writing in June 2012, I, a senior citizen living in Barnstable Village, was permanently banned w/o warning and w/o due process by library director Lucy Loomis.  The latter’s lame excuse for killing liberty (i.e., criticism of Loomis and her library) was “for the safety of the staff and public.”  That was all.  In fact, it took an order by the State Secretary of Records for the State of Massachusetts to force Loomis to open library records to public scrutiny, which is the only way I found out about the aberrant “safety” issue.  Despite my having no criminal record at all, Loomis deemed me a dangerous citizen.  Was Loomis perhaps an out-of-the-ordinary weak woman?  In fact, I have a PhD from a French university.  Compare that with whatever Loomis might possess!  Moreover, I have NEVER threatened anyone, let alone physically hurt anyone.  Well, perhaps written criticism of librarian policy could be perceived as a serious threat by a library director, if the latter can simply not bear criticism.

Do you care about any of this?  Likely, you won’t give a damn.   Why not?   Well, your very job depends on your apathy to matters of freedom of speech on Cape Cod.  That’s why.  For information (actual documents et al) on Loomis’ heinous action against the freedom to criticize libraries and librarians on Cape Cod, see http://theamericandissident.org/orgs/sturgis_library.html.

Finally, the problem with the arts and literature on Cape Cod is that the arts and literature have been 100% castrated and coopted by the Chamber of Commerce tourist industry and its diverse cogs from librarians to magazine editors.  Imagine not one library on the Cape will subscribe to The American Dissident, published right here on the Cape.  Do you think Loomis would allow me to place a free copy in her little free library box?    Now, for your magazine, how about an article authored by me, "Cape Cod’s Very Own Dangerous Senior Citizen"?
Posted by G. Tod Slone at 3:53 PM No comments: 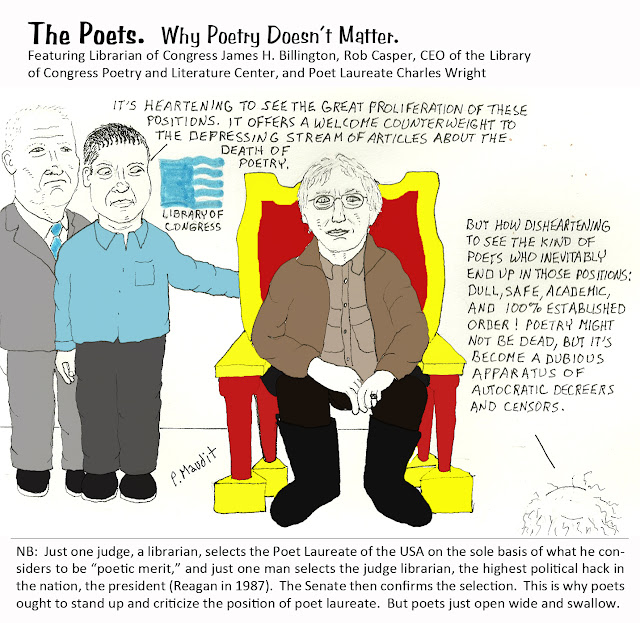 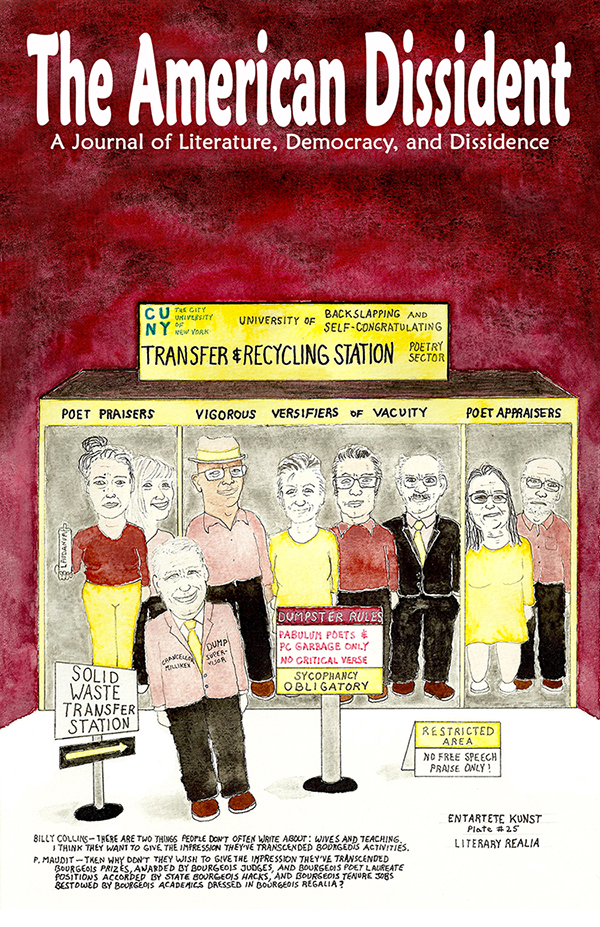 ...........................................
From The Editorial of Issue #36
[...] In any case, the front cover of this issue was inspired by a New York Times article,“How CUNY Became Poetry U,” written in blind praise of university poet/prof prize-winners, by Elizabeth A. Harris:
The City University of New York is many things. It is vast. It is accessible to students without a lot of money. It is exceptionally diverse. It is not, however, particularly fancy, the kind of place that oozes exclusivity or prestige. And yet CUNY is home to a surprising number of extremely accomplished, recognized—some might even say fancy—poets.
Harris of course is incapable of wondering what precisely “accomplished” and “recognized” really tend to mean, as in coopted, conformed, and castrated.  Moreover, “accomplished” is clearly a subjective, not an objective, term. “Accomplished” for Harris might imply “sellout” for someone else. And “recognized,” but by whom? Well, by others who are likely also “recognized.” To reach the “accomplished” and “recognized” poet status, clearly, one must not be a rare poet who goes against the grain of the academic/literary establishment.  CUNY chancellor James B. Milliken (see front cover) argued,
I’m not sure that ‘fancy’ is the key to creativity. CUNY has to be one of the most diverse universities in America, and it seems self-evident to me that diversity of all kinds contributes to creativity. Add to that the fact that we’re in New York City.
“Diversity of all kinds”?  Hardly!  Certainly not diversity of opinions regarding CUNY’s backslappery. Featured from left to right are Harris; Elizabeth Lund (WaPo), Tyehimba Jess, Pulitzer English Prof, College of Staten Island; Kimiko Hahn, PEN/Voelcker Award for Poetry, Prof, Queens College; Ben Lerner, MacArthur Fellow, Prof, Brooklyn College; Poet Laureate Billy Collins, Prof, Lehman College; Alison Hawthorne Deming, Pulitzer Jurist Social Justice Prof, University of Arizona; and Wesley McNair, Pulitzer Jurist Poet Laureate of Maine.  [...]