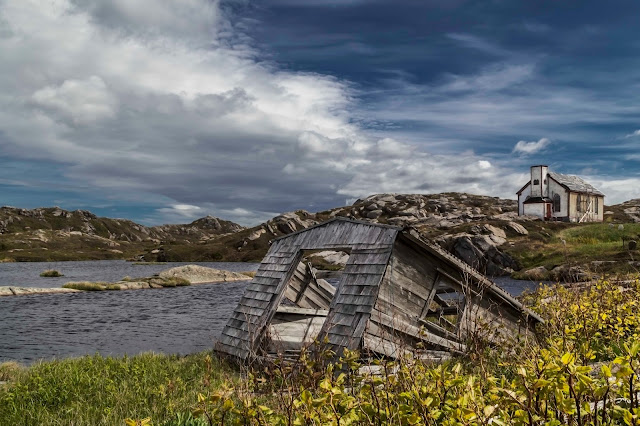 Petites is an abandoned outport on the southern coast of Newfoundland.  It is a ghost town with no roads...  In the background is the old church. 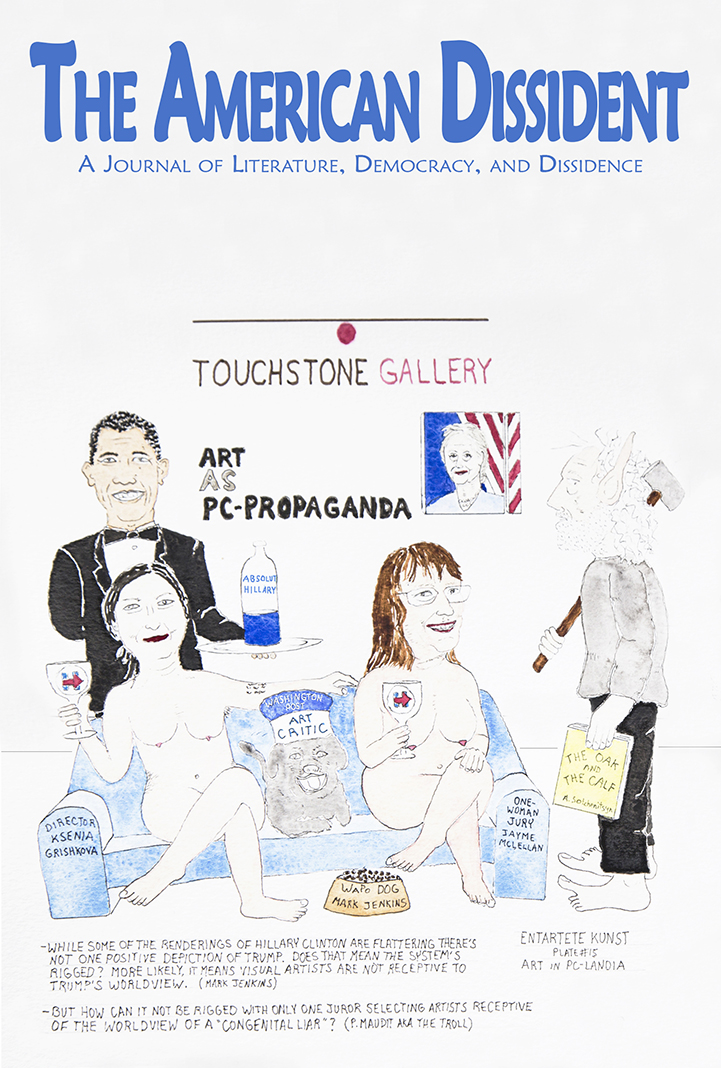 Censored and Banned
The front cover of this issue was inspired by an article in the Washington Post by Mark Jenkins and depicts a couple of local DC arts regulators: Touchstone Gallery Director Ksenia Grishkova and Judge, uh, Juror-Curator Jayme McLellan.
Jenkins is also depicted, though as a lapdog arts hagiographer. He would not provide his photo, and I could not find one on the internet. His article concerned Touchstone Gallery, based in Washington, D.C., which held an “Art as Politics” exhibit, though seemed really to have been “Art as PC-Propaganda.”
Every region and state in the country has its cultural council, art associations, art galleries, art museums, and art blablabla manned and womaned by art apparatchiks, usually with lofty titles. These organizations are usually well-funded with taxpayer money and usually represent fine arts examples of cooptation by business (i.e., chambers of commerce), which also control government.  And of course they usually broadcast their hypocrisy, as in “All the Arts for All of Us” (Cultural Center of Cape Cod) and “We abhor censorship of any kind” (Touchstone Gallery blogger Rosemary Luckett).  As for the latter, my comments were eliminated, uh, censored. Luckett, however, didn’t eliminate, uh, censor, Arielle K. Masters’ comment:  “Love that circus tent quilt!” For the brief correspondence I had with Luckett and Jenkins, see the Literary Letters rubric.
America seems to have a paucity of courageous artists willing to stand up and speak rude truth to art apparatchiks. Instead, most beggar for funding and seek to climb up the careerist see-no-evil, speak-no-evil art ladder.  They don’t care about free speech.  They don’t need free speech.  They’re content with PC-speech.  What they want is limelight, invitations, grants, and awards.  For my counter-essay vis-a-vis Jenkins, see Art in PC-landia.
On another note, The American Dissident was banned by the Texas Department of Criminal Justice… with no mention of the reason for the action. Those in power, from the little Lucy Loomis library directors on up to the faceless correctional institution review committee members, are not obligated to explain their totatitarian actions.  Inmate Steven Hostottle was published in the last two issues of The American Dissident, so I’d sent him a few copies.    Sadly, the faceless committee members refused to give them to him.  Clearly, they’d leafed through the copies, didn’t like what they saw, so decided to ban the magazine.  Hostottle’s poems did not praise life in one of their Texas jail cells.  See his letter at the end of the Literary Letters rubric.