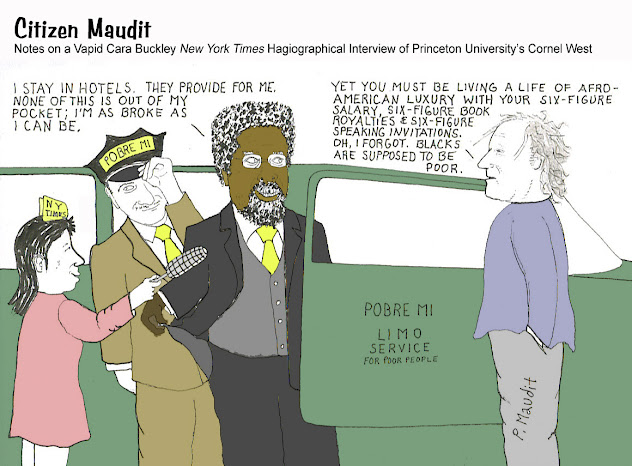 The above cartoon was sketched in 2010.  Yes, I spelled Corn's name with one L. 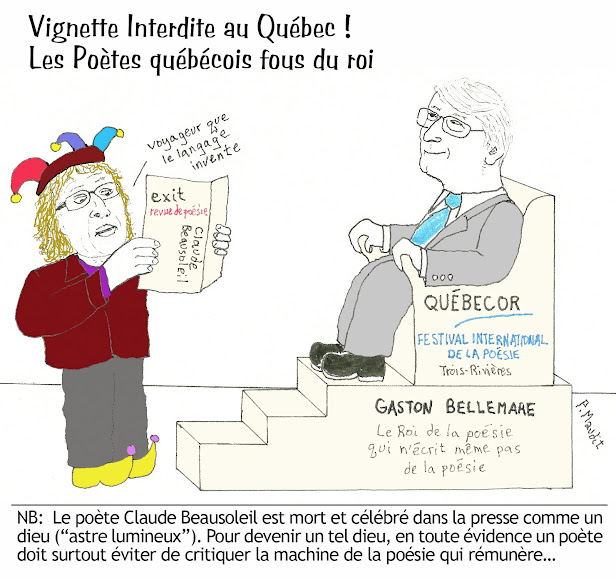 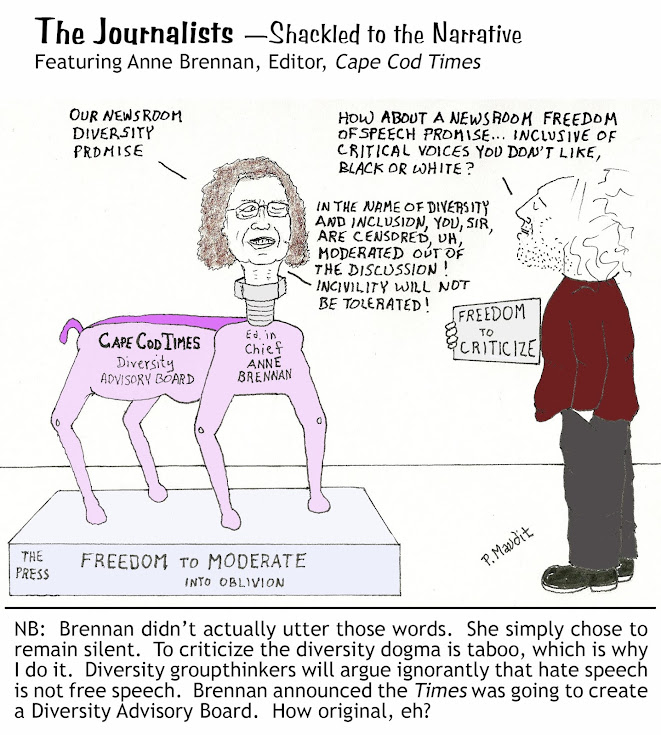 Brennan did not, as expected, respond to the above cartoon or email and essay below.  Brennan clearly is NOT an advocate of vigorous debate, cornerstone of democracy and, once upon a time, of the free press.

Please publish the following critique, as well as the attached cartoon.  Of course, it is highly likely that you will choose NOT to publish them, let alone respond.  Please then, for your sake, at least contemplate the hypocrisy of such an eventual decision...

The American Dissident, a 501c3 Nonprofit Journal of Literature, Democracy, and Dissidence

A Wrong Focus for Journalism

Journalists seem to focus on anything but why they are so distrusted today.  Extreme bias, general intellectual corruption, inability to brook criticism, let alone encourage it, constant virtue-signaling, and suppression of stories that don’t fit the narrative have led me to distrust them.  Moreover, a “successful” journalist like any other professional—academic, political, literary or whatever—is one who always puts career above truth telling.

Anne Brennan, the new editor of the Cape Cod Times, part of the Gannett media corporation, wants to focus, unsurprisingly and quite unoriginally, not on those faults, but rather on diversity.  “Our newsroom diversity promise,” the title of her editorial, begins with “The Cape Cod Times has a history of telling stories about the diverse members of our community…”  Well, it sure hasn’t told my story about being permanently banned from my neighborhood library on Cape Cod, despite a number of attempts on my part to interest it.  Why would a local newspaper not want to publish an account of that particular suppression of citizen freedom?  Intellectual corruption is the only response.  Likely the library director was and is friends with journalists at the Times.  The latter also refused to publish anything critical I sent to it over the past decade.  Clearly, its focus is not on TRUTH and issues of FREEDOM OF SPEECH, but rather on the PC-identity politics of thought uniformity.

“Where we fall short is by not seeking diverse voices in the daily course of covering Cape Cod and the people who live and work here,” proclaims Brennan.  However, “diverse voices” is really nothing but code for uniformity of voices from people of different skin colors.  Then, surprise, the editor echoes:  “The egregious death of George Floyd at the hands of four Minneapolis police officers forced us all to think about the inequality and, yes, racism, that is an inherent part of the American story.”  Actually, it did not force me to think about that or anything else… because I am a staunch individual.  It did however remind me of the three black youths who attacked and robbed me in Baton Rouge, and the local newspaper, The Advocate, that refused to report on that incident.  Perhaps the Floyd incident should have further encouraged us not to simply open wide and swallow anything journalists push.  As far as “uncomfortable truths” go, Floyd was a black drug addict with a long criminal background and was high on drugs when arrested.   Why does Brennan purposefully omit that information?  And what about the statistics that clearly disprove the MSM “systemic racism” narrative, especially regarding cops?

As mentioned, the real egregious problem—the elephant in the room—confronting newspapers like the Cape Cod Times, besides rejection of criticism when they’re concerned, is bias, not racism.  It appears, and one must underscore the word “appears,” that the new editor is at least aware of that core problem, as indicated in a different editorial, "A note to readers: The Cape Cod Times will no longer take editorial positions, endorse politicians":  “The decision for the Times to no longer take a stand on issues, unless they are of major importance, is driven by our desire to reduce the growing confusion over the difference between opinion and commentary and nonopinion news content.”  One must be suspicious, however, because clearly Brennan has endorsed the political position of identity politics.  She states, “Despite no longer taking positions on local issues, the Times will continue to be an unbiased authoritative source of information and community action.”  She also notes, “The goal of journalists and editors at the Times is to collect information and report the facts of a situation without bias in stories, photos, video and social media posts.”  But those statements seem to be examples of virtue-signaling, not reflections of reality.  A number of Times stories, for example, do NOT follow that recipe at all!  My bringing that to the attention of the editors, past and present, was of course futile and simply ignored.  For examples of my attempts, examine “The Whitewashing, uh, Blackwashing of BLM:  Questioning and Challenging the Parrots,” “To Herring or Not to Herring:  Protected Species for Some, But Not for Others,” and “To Noose or Not to Noose: In the Haze of Legal Vagueness.”

Rather than address real problems confronting journalism, the Times is going to create a Diversity Advisory Board, yet another addition to the vast “diversity delusion” (Heather MacDonald’s book title) and ever-expanding diversity bureaucracy.   Anything but the rude truth!  “Rest assured, we are committed to fostering the already civil debate that occurs on our pages on a daily basis,” states Brennan.  “I look forward to reading what you have to say.”  Now, do you think she looks forward to reading what I have to say?  “Finally, we want to hear from you, our readers,” states Brennan, as if teaching a course in BS 101.  Oops, that’s incivil!  Here come the journalist censors, uh, moderators… 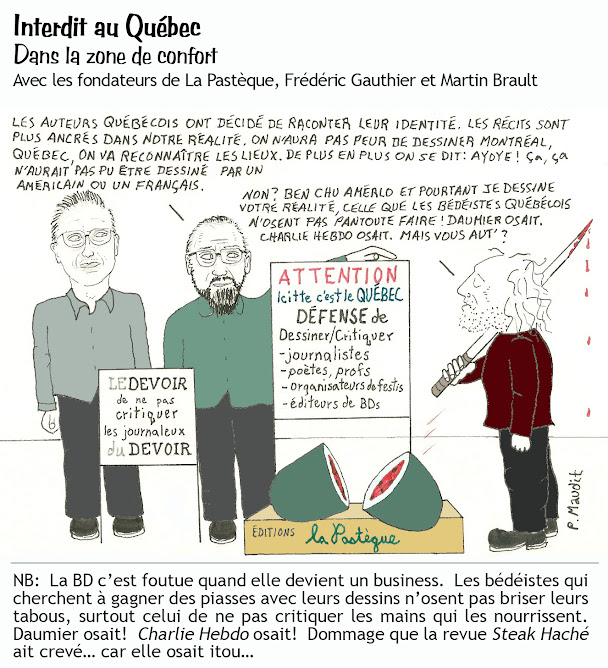 The following cartoon was sketched in 2016.  I put it up now since it was never posted.  What got me to do that is the recent hagiography on Walter Williams written by the editor of Reason.  See after the cartoon my futile attempt at dialogue. 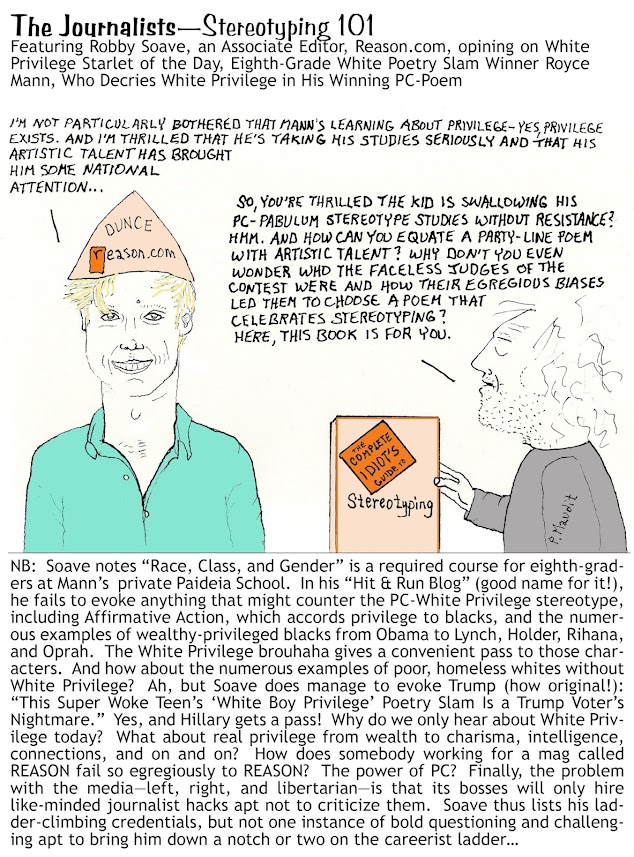 This email will appear in the next issue of The American Dissident and will serve to hopefully make you think out of the Libertarian box, if possible.  Enough with the blind hagiographies like the one you just wrote on Williams, a lifer academic!  And how sad, Reason does not provide a little space for criticism against its editors.  Now, how can that help reason?  Well, it can't...

Conservative black professor Walter Williams died.  He is dead.  So, now the hack hero worshippers praise the corpse, as if somehow when alive it/he was perfect.  Well, he sure as hell was not!  In essence, how can someone who taught at the same college, George Mason University, for 40 years possibly be perfect?  How many times did Williams turn a blind eye, as he climbed up the academic ladder, at the likely intrinsic corruption at George Mason University, the hand that fed him so royally?  How many times?  We’ll never know, of course.  Williams was a careerist.  Career and truth do not mix well at all... especially in academe.

In any case, below is a revealing response from Williams regarding the censorship (removal) of my comments posted on Frontpage magazine, run by the conservative David Horowitz Foundation.  Williams was a long-time contributor to it.   See the essay I wrote with that regard  (wwwtheamericandissidentorg.blogspot.com/2016/02/michael-finch.html) and the cartoon I sketched on Williams in 2015 (wwwtheamericandissidentorg.blogspot.com/2015/12/walter-williams-david-horowitz.html).  If one does not test the waters of democracy, then one does not really know how murky they are.

Now, might Nick Gillespie be at all interested in the proof I present regarding Williams’ grotesque hypocrisy?  Of course not!  After all, Williams was “A popular syndicated columnist whose work appeared in over a hundred newspapers on a weekly basis, he was a long-time contributor to Reason and served as an emeritus trustee of Reason Foundation, the nonprofit that publishes this website.”

And that Nick is your achilles heel.  The one you will likely never examine.

Subject: Your concern for liberty for your fellow man...

If you are not the person, though I believe you are, who wrote the article on Free Speech in today's FrontPage mag, then ignore this missive.  If you are, however, then you did write:  "Most people want liberty for themselves. I want more than that. I want liberty for me and liberty for my fellow man."

BUT do you really want liberty for your fellow man?  FrontPage mag censored my comment several days ago.  It censored my liberty.  I protested that act of censorship to Horowitz and Tapson, but nobody deigned to respond, proving the right-wing is also into censorship.  If you truly cared about my freedom of speech, you would stand up and send a protest letter to Horowitz.  Why not tell him he ought to follow Jonathan Turley's policy of NOT moderating (i.e., censoring) comments.  Likely, you will not do that.  And that would answer the question about your desire of liberty for your fellow man.  The email and my censored comment figure below.  You will note the absence of threats, prohibited words, etc. in it.

One’s right to free speech does not impose an obligation that others to provide a forum for him.

And so all I managed to get from the professor (i.e., Williams) was a “cheers.”  What a jerk!

Below the cartoon is the email sent by Foster in total outrage over the cartoon I drew on Chen Chen, poet of the establishment, anointed by the establishment as one of "10 Poets Who Will Change the World."  Now, how not to satirize that?!  The email of course inspired me to sketch the cartoon below.  I am well aware that in the very near future, such a cartoon will be prohibited and result in a fine or even incarceration.  And of course in that Brave New World, the Fosters will finally be happy. 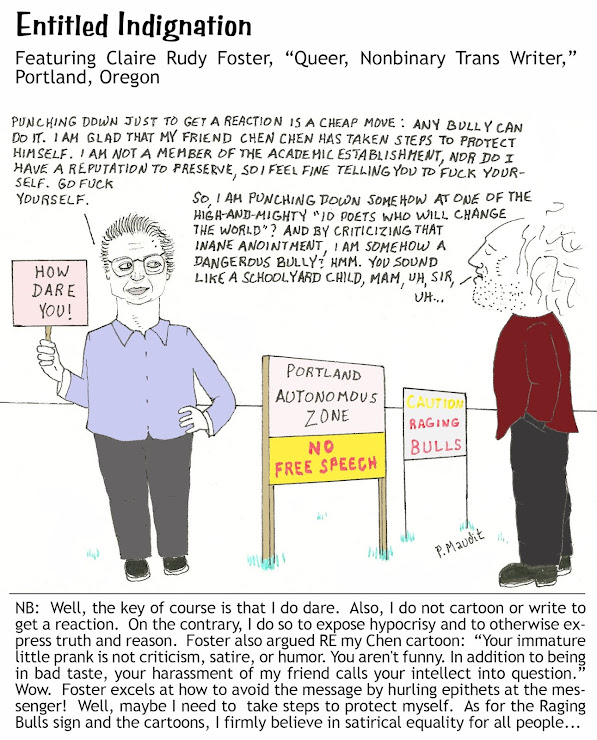 It's been brought to my attention that you disseminated a racist cartoon of a friend of mine to my friend and his colleagues at Brandeis. Apparently you are offended by my friend's presence in academia and his recent essay about universality. Your bizarre, groundless comments about "Community Chinese apparatchiks" is racist and vile. You should be ashamed of yourself for pursuing such a low and valueless line of thought. You are quick to tout your PhD, but with actions like these, one wonders how smart you really are.

Your immature little prank is not criticism, satire, or humor. You aren't funny. In addition to being in bad taste, your harassment of my friend calls your intellect into question. You are not a rebel; you represent a vast and disgusting demographic of half-baked, armchair brains who think it's "edgy" to perpetuate xenophobic and homophobic stereotypes. Punching down just to get a reaction is a cheap move: any bully can do it. If that's the only way you know how to get attention, I feel really sorry for you. Maybe if you put that energy into crafting an original thought, you'd come up with something worthwhile?

I am glad that my friend has taken steps to protect himself. I am not a member of the academic establishment, nor do I have a reputation to preserve, so I feel fine telling you to go fuck yourself. 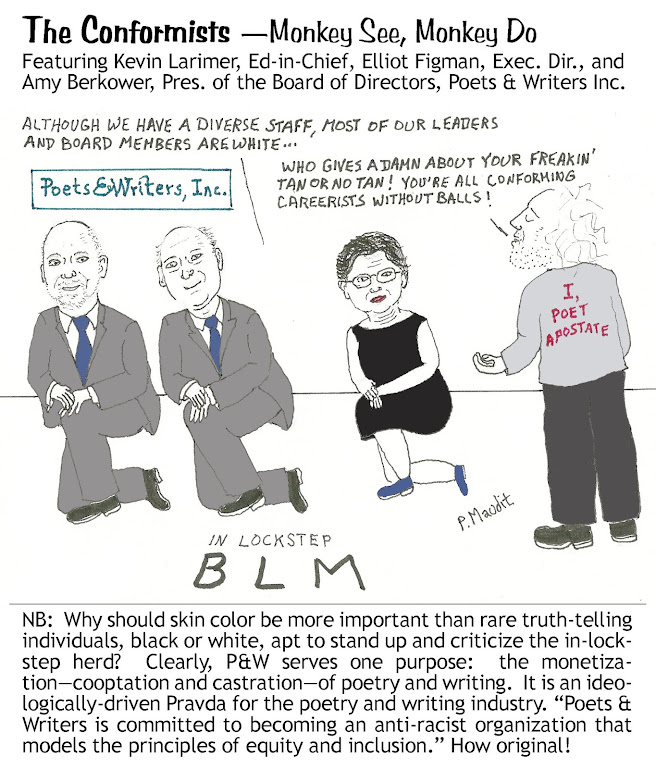