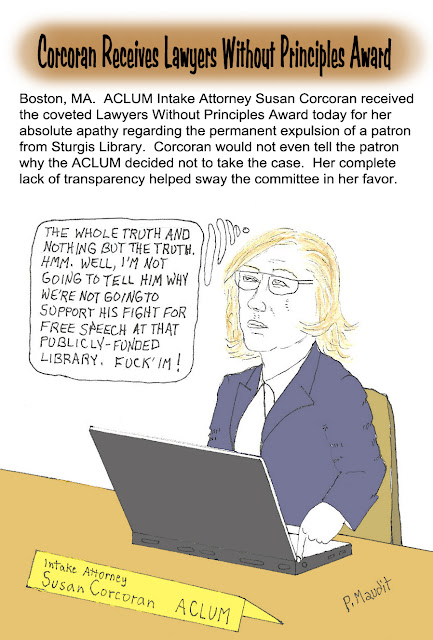 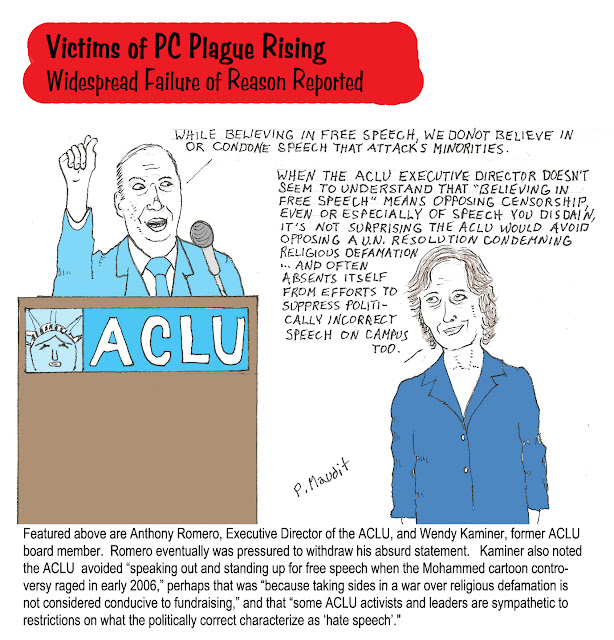 To Wendy Kaminer,
Your book, Worst Instincts, was truly a great read. I do quote you now and then. In fact, I even recently sketched a cartoon on you and the CEO of the ACLU. It is posted on my blog. Thank you for that inspiration.
On another note, perhaps you ought to be aware of what goes on under your very nose on Cape Cod. For one thing, Truro Library and the rest of the libraries in the Clams Library System of Cape Cod have essentially banned The American Dissident from the system. In fact, in a last ditch effort to get just one of the libraries to subscribe ($20/year), I sent a letter to about 25 library directors of the system, including Truro's. Only one director responded a week later, though not in writing. Lucy Loomis, director of Sturgis Library, had no less than three cops enter the library to escort me out of the library. I was quietly working on my laptop per usual. I have never caused a ruckus or threatened anyone at the library. Loomis announced that she was PERMANENTLY trespassing me from the library because I'd been critical of it and made her "feel uncomfortable". She refused to hand me a written document, arguing her decree was verbal. Ellie Claus, president of the Barnstable County libraries, refused to accord me due process, despite my request. A year and half earlier, Loomis had prohibited me from leaving my critical flyers on library premises and from talking about that with staff. I obeyed. In fact, she even refused a free subscription offer. The ACLUM will not take my case, though it did say it spoke with the library. It would not tell me what was said. So now I am forced to pay taxes to help support a library that has permanently banned me. That really makes me feel quite uncomfortable. Yes, Loomis had told the cops that I'd made her "feel uncomfortable."
This whole incident was really surprising to me, even though several years ago Watertown Free Public Library had trespassed me for three months w/o due process. I had asked a rather surly reference librarian if she'd consider subscribing. In fact, I've only been to that library once in my entire life. Yet the cops told me the ref librarian had said I'd been a problem on other days too.
I do hope you might respond. 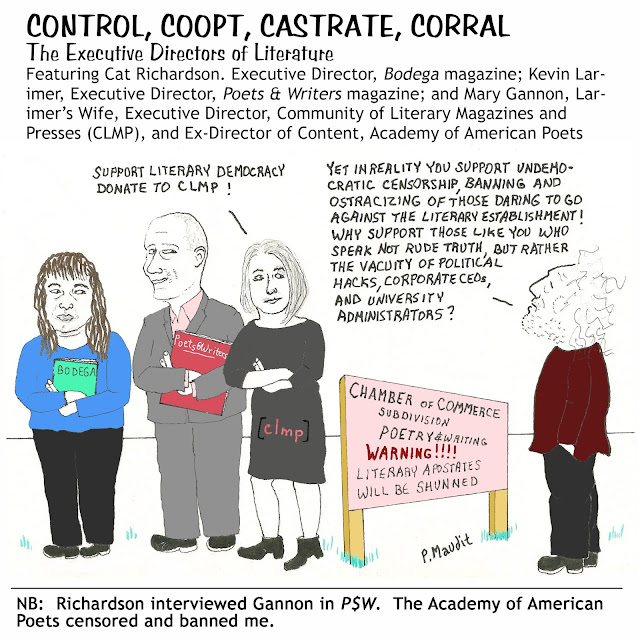 The above cartoon I sketched a year ago.  For some reason, the editor of Provincetown Arts, Chris Busa, who HATES debate and alt-opinions, sent me an email yesterday (2/4/2020) with the Subject:  "{Virus?} RE: Mary Gannon featured in a new essay and P. Maudit cartoon."  No message was included with the exception of "This is a message from the MailScanner E-Mail Virus Protection Service. The original e-mail attachment "8119-17893_City_Report.doc" was believed to be infected by a virus and has been replaced by this warning message [,,,]"