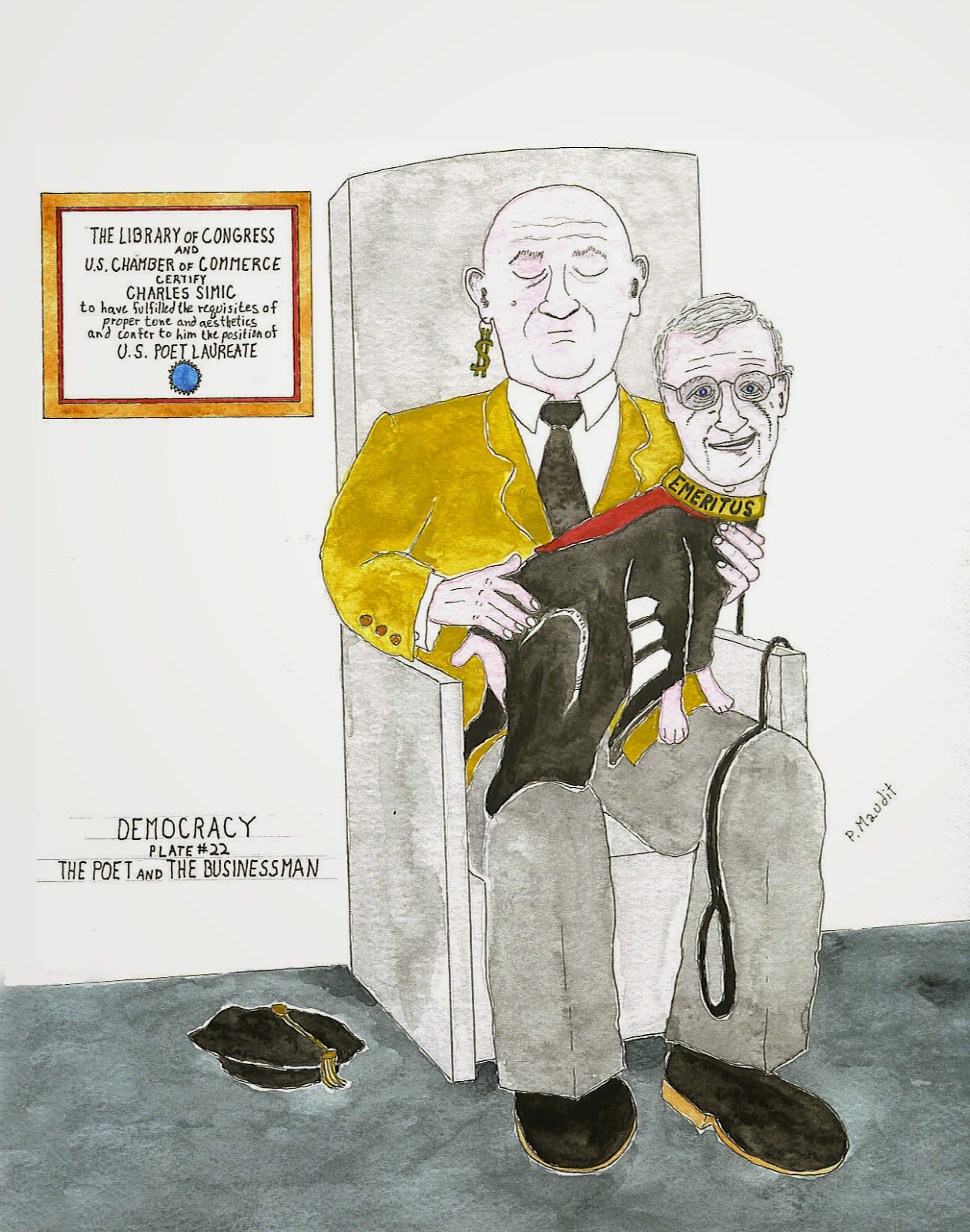 Poet Laureate of the U. S. Chamber of Commerce 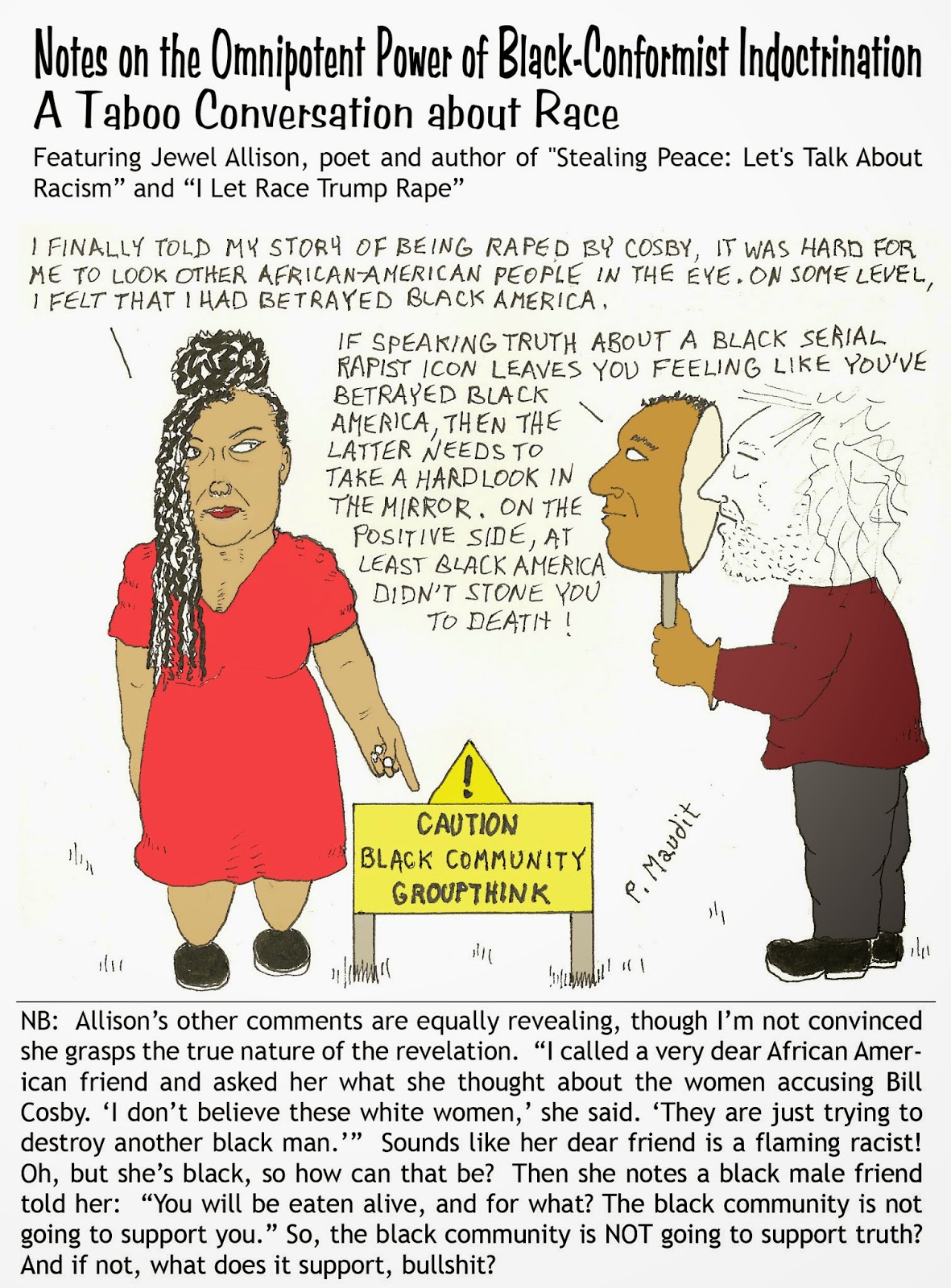 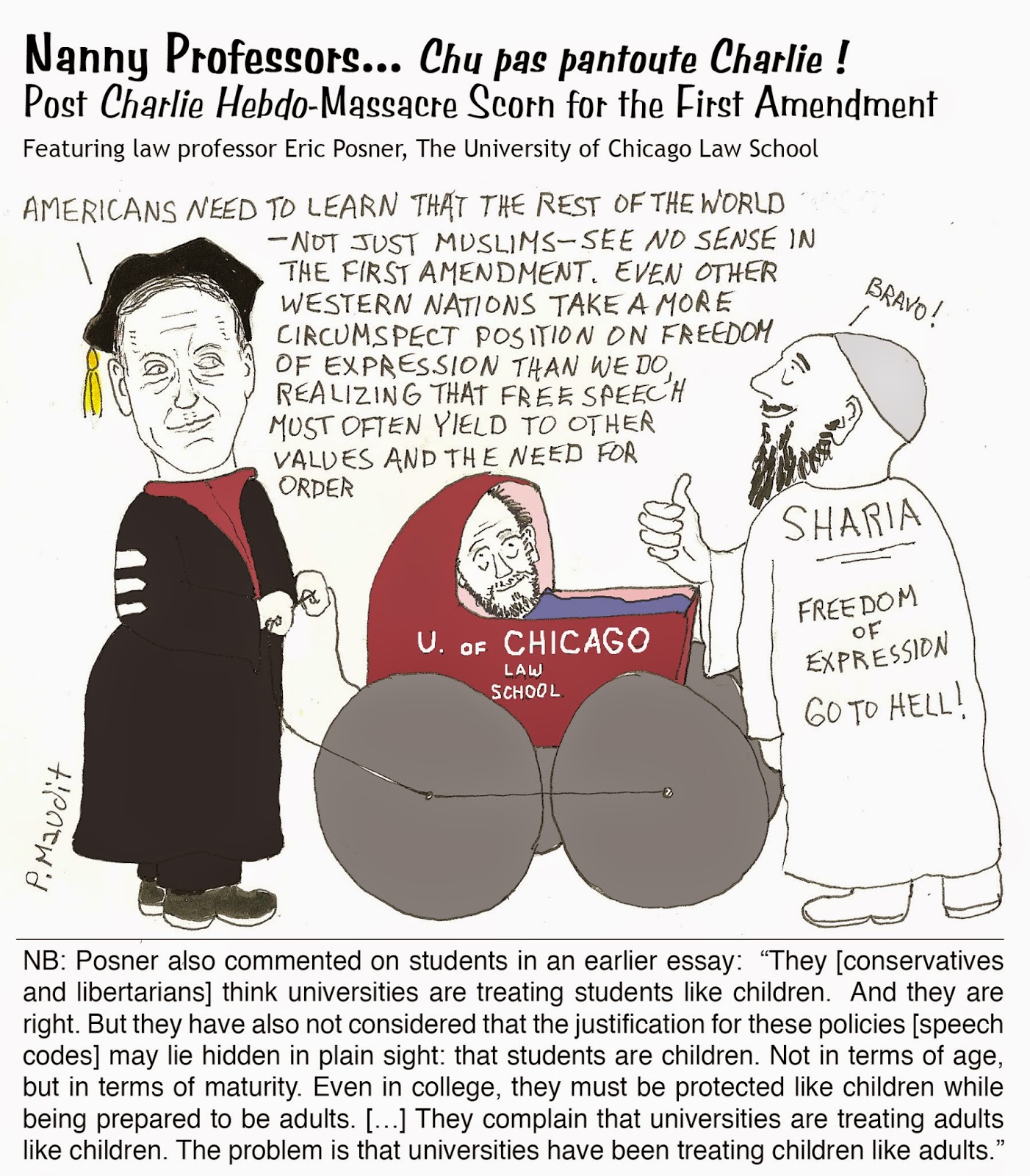 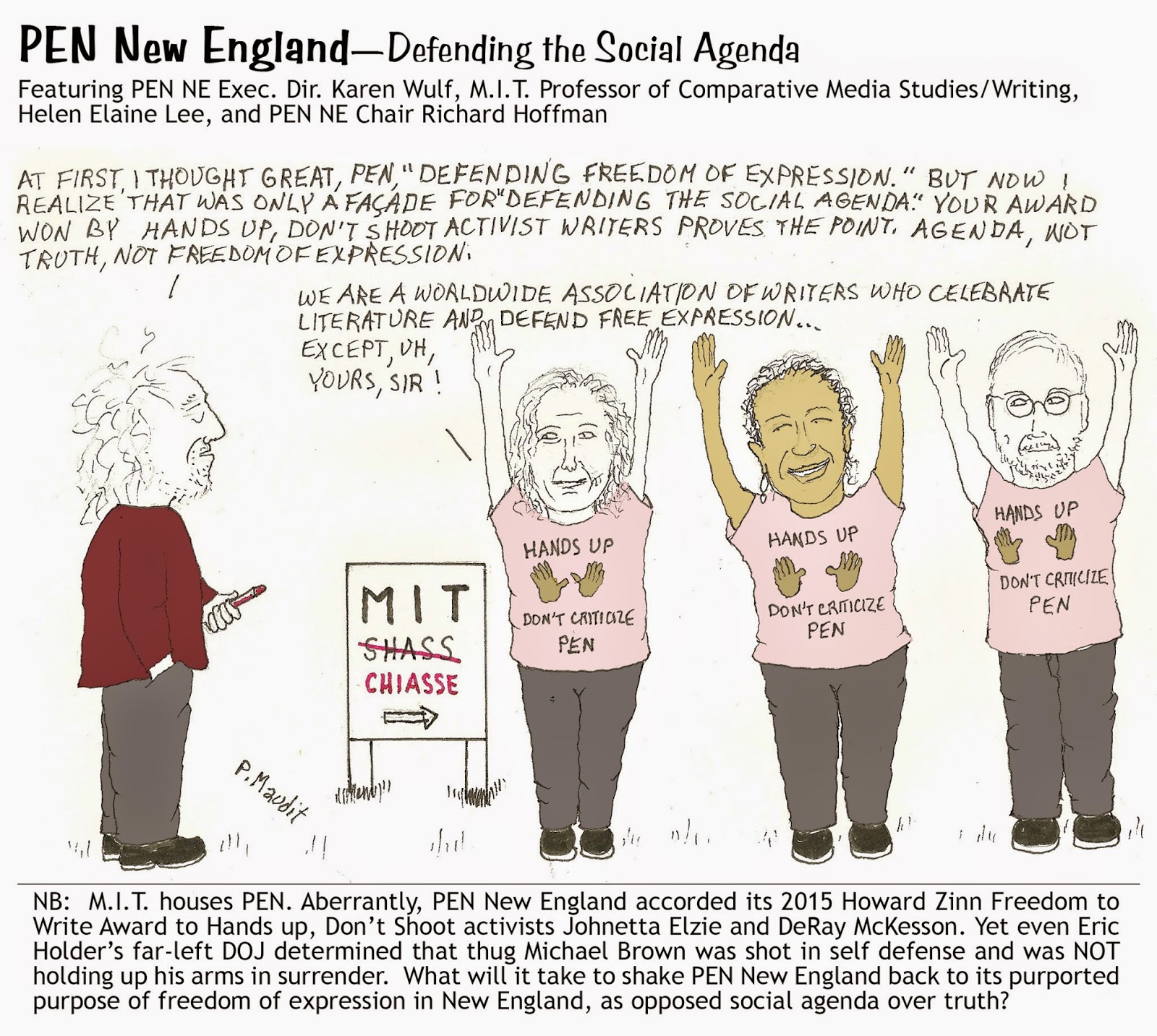 Is it not shameful that so many academics, poets, editors, and even PEN functionaries when questioned and challenged tend to remain absolutely silent?  Are they really that high and mighty that they refuse to respond to criticism when lodged by a lowly unconnected plebe like me?  Apparently, they certainly think so.  Below are the emails I'd sent regarding the above cartoon.  Not one person addressed deigned to respond.  Sadly, such lack of response is not unusual.  Could it be that my criticism hit the tender hurt-feelings bull's eye?  Hmm.  What ever happened to vigorous debate, democracy's cornerstone, here in America?  It seems PC has succeeded in giving it a death blow.  Onwards... nonetheless!

To Richard Hoffman, PEN NE Chair and Emerson College Prof,
You are the subject of a new P. Maudit cartoon (see http://wwwtheamericandissidentorg.blogspot.com).  Feel free to comment.  Comments on the site are never moderated (i.e., censored).  This email has been cc'd to Karen Wulf, who is also depicted.  Wulf has been irresponsive (i.e., irresponsible), which is why I direct it to you.  It has also been cc'd to Helen Elaine Lee, Professor Comparative Media Studies/Writing at MIT, who is also depicted and has also been irresponsive (i.e., irresponsible).  A separate email was sent to the "independent" (usually means dependent) student newspaper editors of The Berkeley Beacon at Emerson College, who, if they are anything like you, will likely not respond and will NOT publish the cartoon, despite my encouraging them to do so.  Below are some thoughts on PEN New England, which you will likely ignore.  For a long essay I wrote on PEN, see http://www.globalfreepress.org/sections/free-speech/3415-pen-an-ethical-consideration.  It is not laudatory, so you will also likely discard it.

PEN New England… Defending (Encouraging!) Freedom to Write Lies
A certain infantile simplicity—a vast generalizing to the point where truth is inevitably affected—is embedded in social-activist sloganeering, as in “Hands up, Don’t Shoot.”  In fact, the "Hands up, Don't Shoot" slogan, rather than truth, promoted a lie/was founded on a lie.  But most social activists tend to be wholly unconcerned with truth or rather lack thereof.  Eric Holder’s agenda-driven DOJ was, however, forced by evidence to finally admit that “Hands up, Don’t Shoot” was a lie.  But PEN New England still presented this year’s prestigious Howard Zinn Freedom to Write Award to two of the pusher  activists of that lie.  PEN seems to have clearly deviated from its original founding principle of "defending freedom of expression"… to supporting social activist lies and agendas.  It will not defend my freedom of expression, for example, because it does not form part of the latter.  The problem with PEN in general is its co-optation by the academic/literary established-order and its fawning over famous established-order writers.  Of course, many academics and writers of that established order used to be against that very order.  But money, pension, perks, job security, cowardice, and absence of principles (not ideology, but principles) brought them to the other side.  Once they were against “the man,” that power mongering liar; now they are “the man,” that power mongering liar.  And that they will never be able to understand, let alone admit…

To Ryan Catalani, Editor-in-Chief, The Berkeley Beacon, Emerson College,
One of your professors, Richard Hoffman, chair of PEN New England, is lampooned in a new P. Maudit cartoon (see wwwtheamericandissidentorg.blogspot.com).  It is not a question whether or not Hoffman is a nice fellow, but rather one of truth.  Please publish the cartoon in your newspaper, that is, if you are truly independent and also interested, as all good journalists should be, in examining the darker side of superficially shiny institutions like PEN New England, ACLUM, Mass Cultural Council, Emerson College, etc.   BTW, in Orwellian doublespeak "independent" today tends to mean "dependent."  Also, please publish the brief account below regarding PEN New England.  If you have any questions, I encourage you to hammer away.  Emerson College, BTW, rejects The American Dissident and Ralph Waldo Emerson's famous words "I am ashamed to think how easily we capitulate to badges and names, to large societies and dead institutions. Every decent and well-spoken individual affects and sways me more than is right. I ought to go upright and vital, and speak the rude truth in all ways."
Thanks for your hopeful attention.
Sincerely, 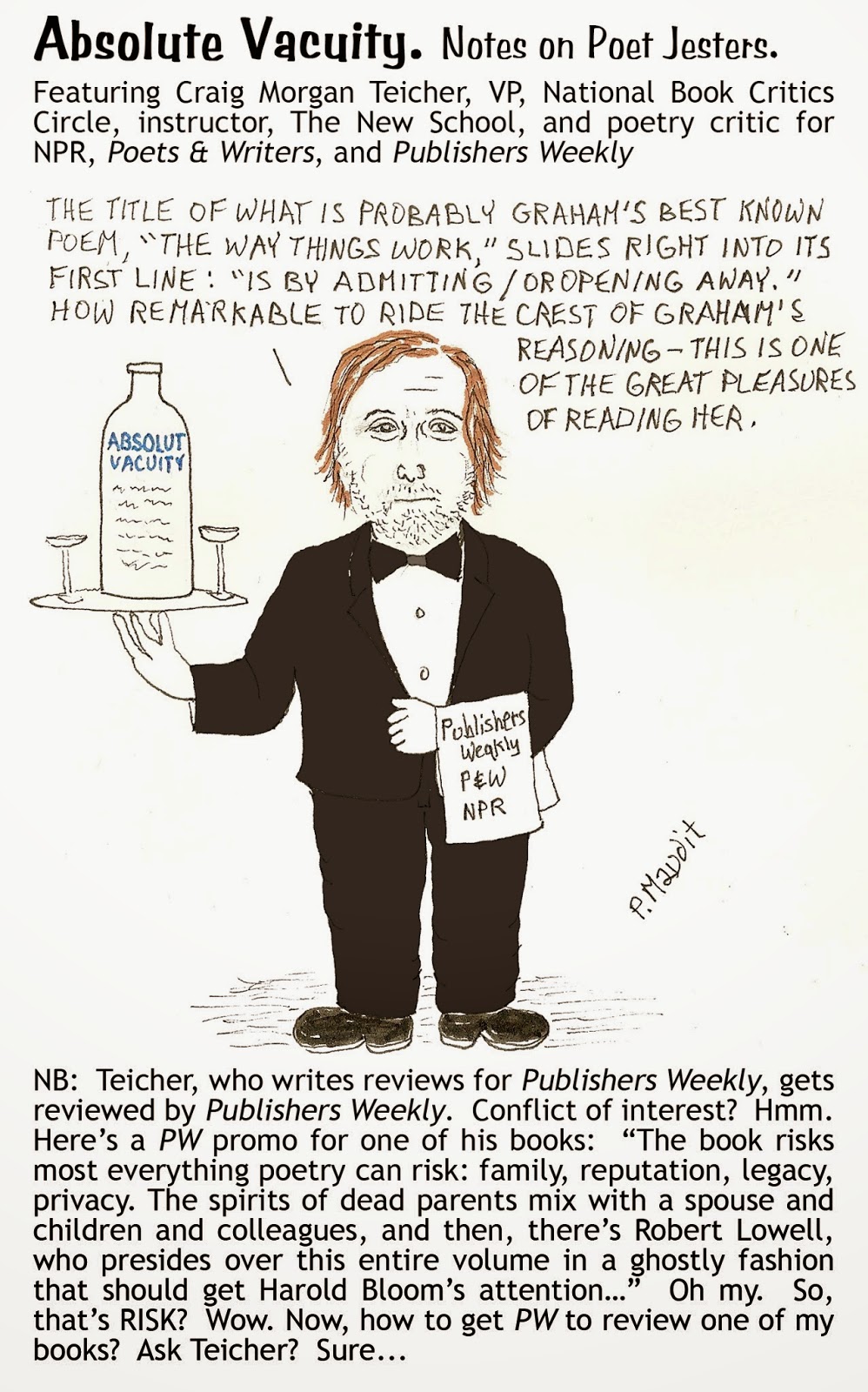 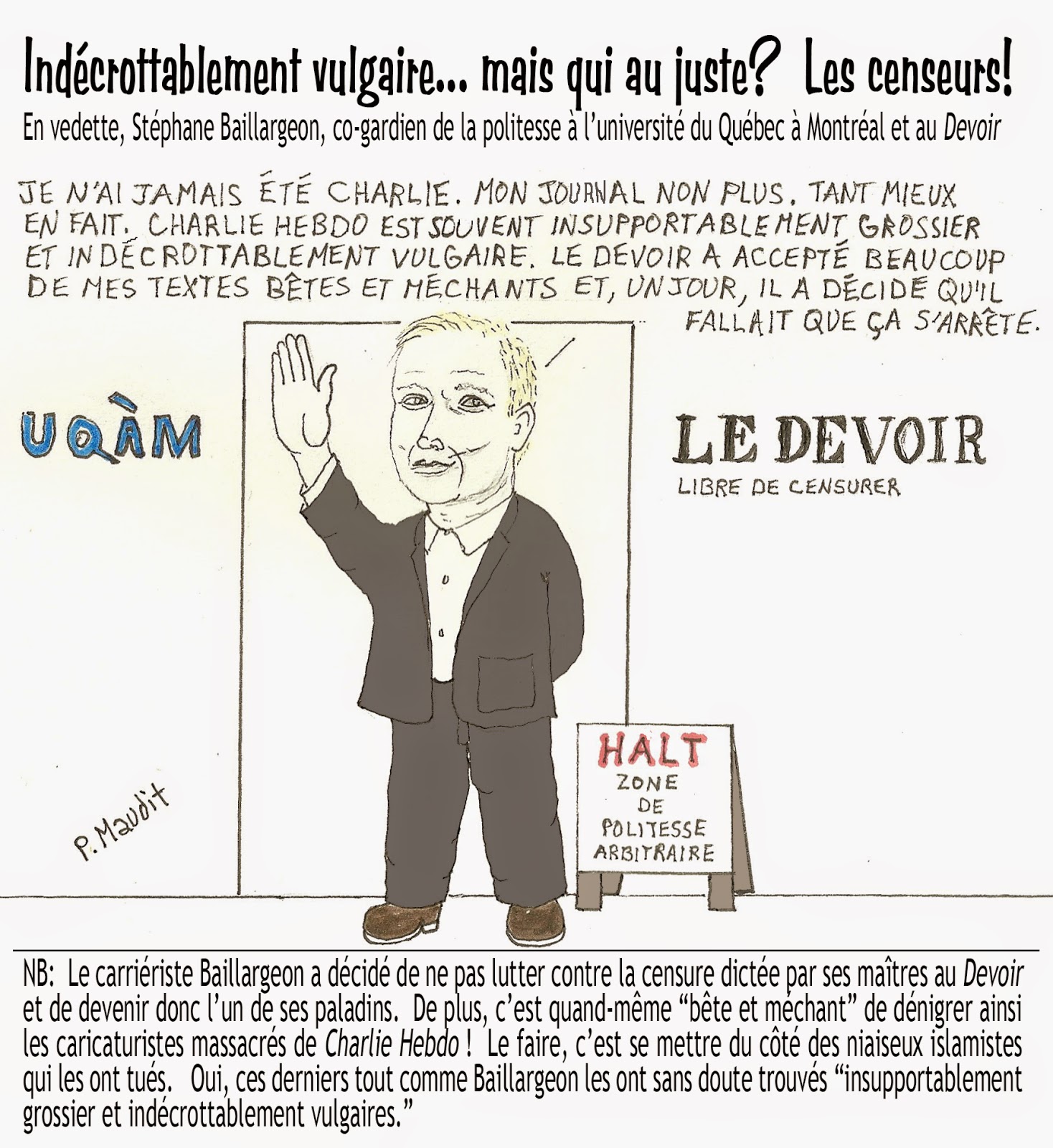