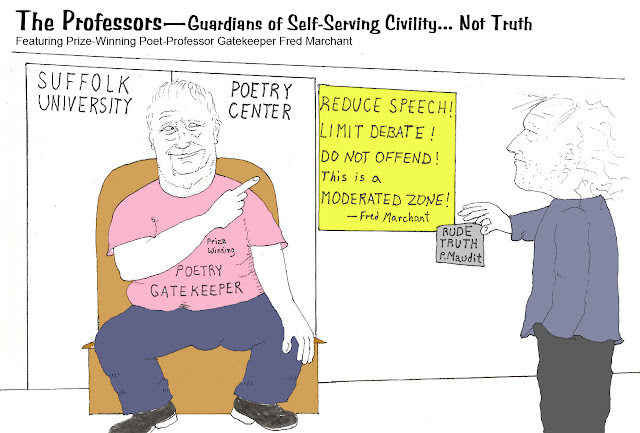 [Unsurprisingly, not one of the professors contacted below deigned to respond.  The student newspaper did respond and wrote he'd be having one of his reporters contact me.  Nothing ever came of it...]

Open Letter to the Members of the Suffolk University English Department
Might there be ONE of you, yes, just ONE of you, who might actually be a proponent of vigorous debate and freedom of speech, cornerstones of a thriving democracy?  If so, please DARE comment on the Fred Marchant satirical cartoon now posted for this week’s American Dissident blog entry (http://wwwtheamericandissidentorg.blogspot.com/2012/05/fred-marchant.html).

As you well know, Marchant is one of your colleagues.  Why not surprise your present and future students by  manifesting unusual CURIOSITY and OPENNESS, normally absent in the minds of most university professors of literature and creative writing.  Tell them about the blog entry!  Encourage them to comment and participate in vigorous debate… regarding literature!  Show them that you do not fear outside criticism and, in fact, welcome it because you can, now and then, even learn from it.  Show them that you are not a mere academic ladder climber  to dubious “success”, but rather an individual of courage, someone not afraid to openly express uncomfortable opinions now and then.

Sadly my two-decade long experience dealing with academics indicates it highly unlikely that NOT ONE of you will deign to respond.

Note that the Suffolk University Poetry Center, which Marchant created, rejected my request that it consider subscribing to The American Dissident, a nonprofit journal of literature, democracy, and dissidence.  In fact, it did not even respond.  And Marchant rejected the thought of inviting me to the Center and/or to his Creative Writing classes to introduce Suffolk University students to the possibility of poetry as an expression of hardcore dissidence.  Rather than sit as established-order gatekeepers of literature, why not instead stand up against the rampant censorship (exclusion or whatever you wish to term it) and ostracizing of those few who dare go against the grain of the literary machine?  Rather than being a cog, why not be a staunch individual and supporter of liberty instead?  Why not be a real role model for your students.  Thank you for your attention.

N.B:  This letter was also sent to the student newspaper, The Suffolk Journal.  Sadly, the editors of such papers tend to be like their professors:  mere organs of institutional happy-face PR. 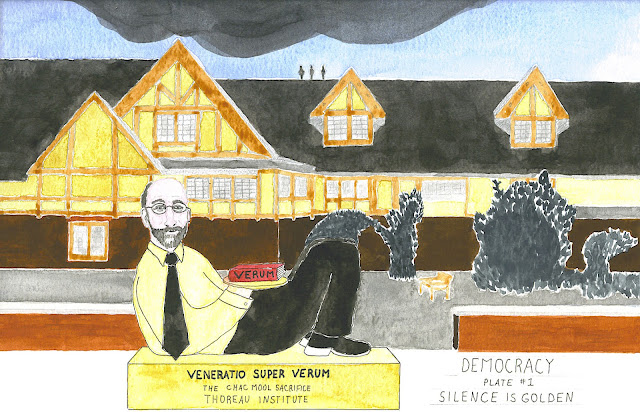 Kent Curtis and his Thoreau Institute are featured in the above aquarelle.  As director of education at Thoreau Institute he rejected my requests to include at the Institute flyers of The American Dissident, which is after all published in the dissident spirit of Thoreau.  However, Curtis refused to even respond, evidently preferring like the Concord Chamber of Commerce to whitewash Thoreau's dissident side in an effort to present him solely as an early ecologist.  Curtis should be ashamed of his evident disdain for democracy and freedom of speech.


Dear Kent Curtis, Thoreau Institute:
Why not take Thoreau one-step further and out of the "working together for higher salaries" (uh, I mean, public education!) MTA-propaganda machine?  Have the children and young adults visit my site regarding Thoreau, Thoreau Society, Thoreau trinket boutique, and Walden Pond, where free-speech is a jail-able offense.  Yes, have them contemplate my arrest and incarceration in Concord for exercising my First Amendment rights at Walden Pond State Facility.  I'd be more than happy to deliver a free lecture on the subject (I do have a PhD, have been a dissident college professor for the past 15 years and have NO CRIMINAL RECORD.).
Thoreau was much more, at least for a few of us, than a friendly, ardent ecologist.  Read between the lines in his journals!  BE CURIOUS and examine my anti-conformist site.  Teach the children to be curious, rather than indoctrinate them.  Stop perverting Thoreau by placing him in a feel-good museum and context.


The following poem was written at almost a decade ago and was inspired by Kent Curtis’ evident scorn for dissidence.  I’d sent the poem to him also in September 2003, but no response was ever received.  Did I manage to jolt him even if just a little?  I’ll never know.  I’ve also sent Curtis notice that the current American Dissident blog entry (this entry) is devoted to him.  Will he respond… in the name of vigorous debate, democracy’s cornerstone, or remain silent in the name of business as usual in Massachusetts?


The Travesty of Henry David Thoreau


It is no compliment to be invited to lecture before the rich Institutes and Lyceums… There is the Lowell Institute with its restrictions, requiring a certain faith in the lecturers.  How can any free-thinking man accept its terms?…  They want all of a man but his truth and independence and manhood.  (Thoreau, Journal: 16 November 1858)


Is it not the pinnacle of travesty to create “rich institutes,”*


“artificial and complex,” “bolstered up on many weak supports,”


staffed with “preachers and lecturers” who “deal with men


of straw, as they are men of straw themselves,”


which seek to “keep the mind within bounds”?


How Thoreau reviled gentlemen of institutes,


their artificial politeness and eagerness to “drill well,”


their absence of curiosity and robotic civil obedience,


their very lives serving not as “counterfriction,”


but as lubrication to keep “the machine” functioning!


walking down , gagging and coughing,


as careening trucks spew exhaust in the name of enterprise,


and searching—between the ubiquitous and massive


—for peaceful space to wander round.

Imagine him today in , sauntering by


past the bronze sculpture in his effigy, though once


he’d declared “no statue be made of me,” and


past the Walden boutique souvenir shop, where


hazarding to speak truthfully to a park ranger, who,


would have him escorted dutifully from State Property


by a mounted police officer, or two or three.


while lodging gratis at the Thoreau Institute—


thanks to taxpayer and corporate funding—


“I will not consent to walk with my mouth muzzled,


not till I am rabid, until there is danger


that I shall bite the unoffending…”


Imagine the horror on the faces of the executive directors!


around a man who would have despised it,


for its inevitable condemnation and censorship


of “free-thinking” and “truth and independence”?


How Thoreau loathed the “well-disposed”; those “thousand


and one gentlemen with whom” he met, he met


“despairingly and but to depart from them, for


[he was] not cheered by the hope of any rudeness from them”!


Imagine the despair he would have felt today, meeting


of the Thoreau Institute and Thoreau Society, while


at a Thoreau Corporate Outing sponsored by the Thoreau Club.


*All quotes are Thoreau’s. 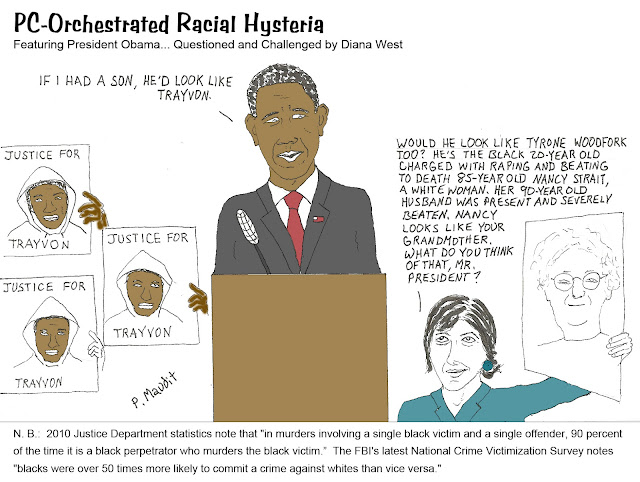 Already the Trayvon issue seems to have become old news.  No matter.  The above cartoon will add to the public record.  In Massachusetts, we now have PC-candidate Elizabeth Warren running for governor and claiming native-American heritage, though no proof of the assertion has been produced (a la the questionable Obama birth certificate)... and so what?!  Who gives a goddamn what color she is or isn't.  Where is the wisdom from our politicos?  In the PC world, WHITE is bad.  If you're WHITE, don't talk about it.  Or better yet stress that your great-great-great-great grandfather had black or Indian origins.  Whoopee!  Christ, what a crock of horseshite!  Identity politics has overrun the movement towards EQUALITY.  It has overrun REASON.
Posted by G. Tod Slone at 5:16 AM 4 comments: