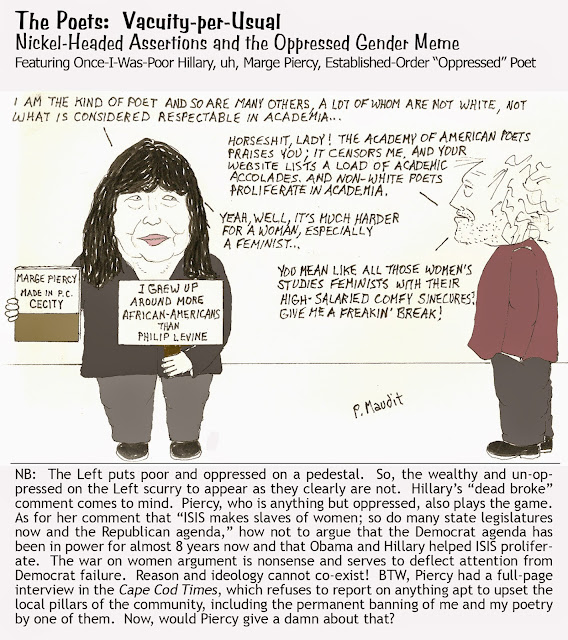 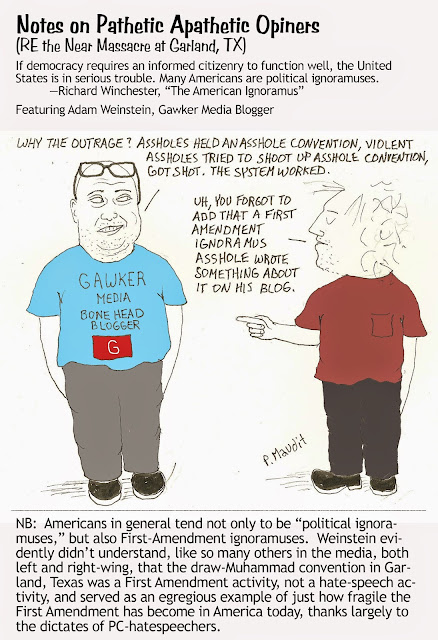 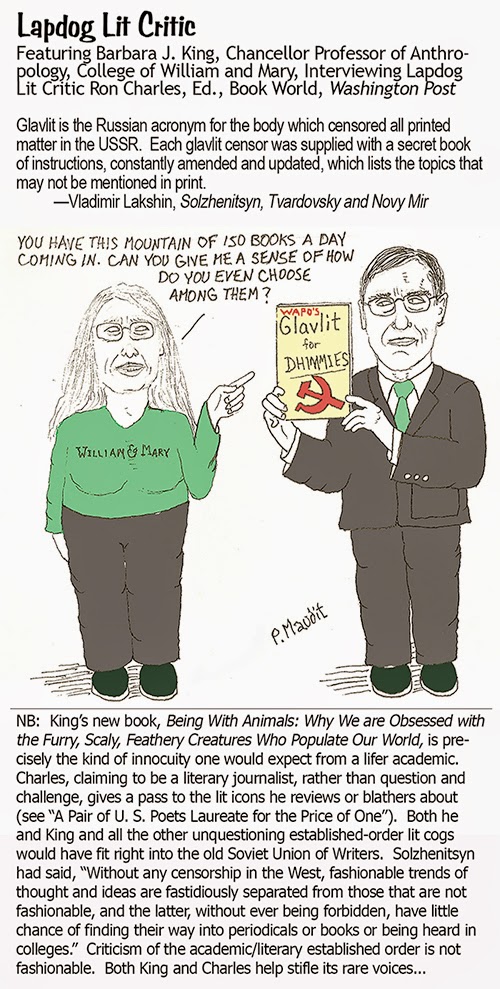 Notes on Lapdog Hagiography and the Three Charlies

Fed, paid, and pampered by the very men
By whom his muse and morals had been mauled:
He had written much blank verse, and blanker prose,
And more of both than anybody knows. […]
—Lord Byron, “Laureate Southey’s Presumption”

What crap ye write on poesy, Ron Charles!  And they call you a journalist?  Your WaPo essay, “A Pair of U. S. Poets Laureate for the Price of One,” was absolutely mind-numbing.  How did you manage to question and challenge nothing at all?  Rather than journalism, that’s lapdog hagiography!
You illustrate the fundamental problem with literature (and journalism) today in America:  the absence of hardcore questioning and challenging of celebrity literati and the academic/literary established-order machine that rewards their conformity, groupthink, banality, and general innocuity—the safe lubricant of literature-as-usual wrapped in a tube called BRILLIANT.  How can you and the two laureatasters idolized in your essay, Charles Wright and Charles Simic, be so blind as to what it takes to climb the literary ladder:  kowtowing, cronyism, backslapping, self-congratulating, and all those other dubious traits that should NOT be rewarded?
One should expect wisdom from poets laureate.  Instead, we—or at least I—have come to expect banality and poesy-as-usual.  Your article clearly fails to manifest any wisdom at all.  Instead, all it presents is hot- air inanity (i.e., pomp).
“The only rule for the poet laureate of the United States is that there are no rules,” you state either as a blatant ignoramus or a willful participant in that Congressional sham.  Rules, of course, do exist, especially Basic Rule #1:  see no evil, hear no evil, speak no evil.  The triumphirate of the monkeys is indeed the true credo of ladder-climbing poets laureate.  In fact, it is evidently yours too!  After all, how else can one rise to lit critic for the Washington Post… if not by not criticizing the diverse hands that feed you to keep your mouth shut?
To back your first statement of “no rules,” you note, “So when retiring laureate Charles Wright decided he didn’t want to follow tradition by delivering a closing lecture this month, nobody called the Capitol Police. And besides, he had a better idea: a public conversation with his friend Charles Simic.”  Wow!  What courage!  What a fabulous illustration of the “no rules” observation!
Awe-stricken you fawn:  “But it made the star-power of Thursday evening’s presentation at the Library of Congress all the more impressive. There was the 20th U.S. poet laureate sitting on stage with the 15th U.S. poet laureate, their Pulitzer Prizes tucked discreetly behind them.”  How nauseating!  With all the crap going on in America, they (and you) sit in pomp and circumstance in the court-jester limelight of an out-of-touch elitist utopic cocoon, o poetasters of the U. S. Congress!  Bravo!   And again, as a journalist, how can you not question and challenge the literary prizes like the Pulitzer?  Who were the judges behind the scenes who awarded the prizes?  What prejudices regarding poetry do they hold?
And then things get oh-so exciting in your reportage when lit-hack host of the event Don Share, editor of multimillion-dollar Poetry Foundation’s Poetry Magazine, asks: “What the heck does the poet laureate do, anyway?”  Oh my, how did he get away with saying, “heck”?  And how can you not wonder aloud, what Poetry Foundation’s $200 million dollars can do and has done to the public face of poetry, including outright castration and overall high-brow bourgeois palatability?
And then Wright unintentionally sums up the sad reality of the inanity illicited from Share’s question:  “You don’t do much.” And when Share pushes for a longer or better response, Wright adds “Every state has a poet laureate—snore—so you might as well have one for the whole shebang. It’s been fabulous. I mean, people bow to me as I go down the street.”  And you pump it all up by describing the response as “wry disregard for the position’s pomp,” as if somehow Wright in a position of pomp was not pompous, but rather noncoformist.  Insane!  How do you guys get away with it?  Both you and Share should have instead asked why so many Americans knee-jerk open wide and swallow the crap and actually “bow” to it?  In fact, why doesn’t Wright have the intelligence to wonder about that… and openly?  As for the laureateship, you note he simply said:  “What does it mean? You’re loved. What’s better than that?”  Well, I (and hopefully others who think for themselves) sure as hell do NOT love that embarrassing suckup.
And how to explain Wright’s blather about his writing “private kind of poetry,” while climbing right to the top of the ladder of public kind of poetry and public recognition—anything but private?  Ah, a little self-slap on the back explains it:  “But the best of private poetry eventually becomes public knowledge.”  Yes, I see.  Sure, that makes sense.  What wisdom!
Finally, at least Simic got it right when asked where poetry will likely be in 50 years:  “It probably won’t change at all: ‘I’m all alone; nobody loves me; it’s always raining.’”  Ah, again what wisdom!  And then Wright’s response to it:  “I’ve written that!”  And to top it all off, your conclusion:  “Two jokers, two brilliant poets.”  Ah, the hackneyed term “brilliant” to describe less than brilliant academic poetasters!  How original! But you did at least hit the bull’s eye with “jokers” as in court jesters… of the U. S. Congress. 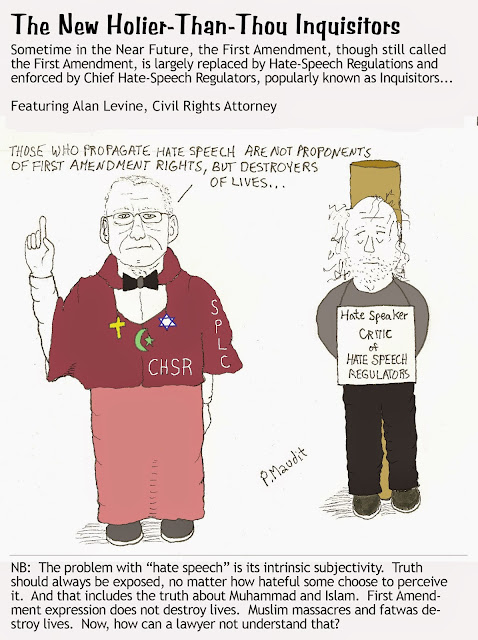 Cancer in the Heart of Free Society:  the Freedom-of-Expression Hating “Hate Speechers”

The revolution cannot be made without killing and, to kill, it is best to hate.
—Che Guevara

Unlike un-privileged me, Civil Rights Attorney Alan Levine got to publish a letter in the New York Times on the near Muslim massacre in Garland, Texas.  The letter was highly deceptive, and thus provoked me to sketch a satirical cartoon, which no doubt would constitute an example of “hate speech” in Levine’s perverted thinking.
The Southern Poverty Law Center, which Levine cited favorably, is a self-anointed determiner of purported hate-speech offenders, who have not been tried for hate speech because, well, hate speech is not yet a crime in America, though it is in Canada and Europe.  The Center is hardly at all neutral, but far-left socialist.  If Che Guevara were an American living in America today, he certainly would not be on its list.  In essence, one must take the SPLC hate-speech offender list with a grain of salt.  And how not to think of McCarthy’s infamous blacklist or Stalin’s or Castro’s or Hitler’s or Mao’s?

The fundamental fault with “hate speech” is its highly subjective nature, which is the prime reason why it is protected speech in America.  Truth and fact can easily be deemed as “hate speech.” Proponents of “hate speech” regulations, the hate speechers, would certainly opt for burying any truth and fact that offend them.  That is the crux of the problem.
As for Pamela Geller, who staged the Texas cartoon event, she was pejoratively described by Levine as “wrapping herself in the mantle of the First Amendment.”  Yet thanks to that “mantle” We, the People can still openly express our opinions even when they counter those of civil-rights lawyers like Levine.  Contrary to the Levine’s assertion and that of the kill-the messenger dhimmi media, both right and left-wing, she has made a useful contribution to a public dialogue about Islam. For example, she helped expose Islamist propagandists in America, who seek to spread the false narrative that somehow Islam, which means submission, is a religion of peace and that jihad is somehow a touchy-feely kind of thing.  She has also helped expose stealth jihad at work in America.  Her cartoon contest helped expose that images of Muhammad were not always frowned upon by Islamists and that persons creating those images were not always butchered by them, as in the grotesque Muslim massacre of the Charlie Hebdo cartoonists.  She also helped expose that the media, both left and right, have largely been suckered in by stealth jihad and do not really support freedom of expression, despite the claims to the contrary.  Furthermore, she helped keep the Ground Zero mosque, the one Obama favored, from becoming a horrendous reality.  So, if Geller’s is “hate speech,” then Levine is clearly wrong to stipulate that “the sole purpose of such speech is to inflame bigotry and to inflict injury.”  Speech does not “inflict injury.”  Islamist butchers inflict injury.  Somehow “hate-speechers” like Levine cannot seem to grasp that simple premise, for somehow they’ve been blinded.  They need to ask themselves how that happened.
Levine mentions how he first came to truly hate Geller, who had denounced one of his clients, Ms. Almontaser, who he described as “a respected educator and community leader.”  As an educator, however, I am quite aware that far too many educators parade around as “respected” when also intellectually bankrupt and outright cowardly conformists.  So I would have to question the description, though I do not know the person.  Levine notes Geller had released a “hate-filled barrage of false and Islamophobic accusations about Ms. Almontaser,” yet fails to evoke just one such accusation.  Moreover, Islamophobic has become an idiot’s term today, used to dismiss any uncomfortable truths about Islam and Muhammad.  Levine should know better than to resort to such base ad hominem, which is normally used to divert attention away from facts that one does not like and cannot disprove.  So, city officials forced Almontaser to resign… all because of Geller’s purported “false accusations”?  Only a severely indoctrinated person could believe that.


Finally, the real haters are the ones who kill people for drawing cartoons, the ones whose  religious book demands apostates, Jews, and kuffars be treated as inferiors and even murdered.  How can Levine and others NOT understand that?  How much money has he made from CAIR and other Islamic front groups, even if indirectly?  How else to explain the blindness?  Now, I do not know Levine.  I do not know Geller.  However, I have certainly “heard” a hell of a lot more reason from her, than from him.  The problem with ideology is that reason ineluctably becomes its enemy…
Posted by G. Tod Slone at 6:17 AM No comments: 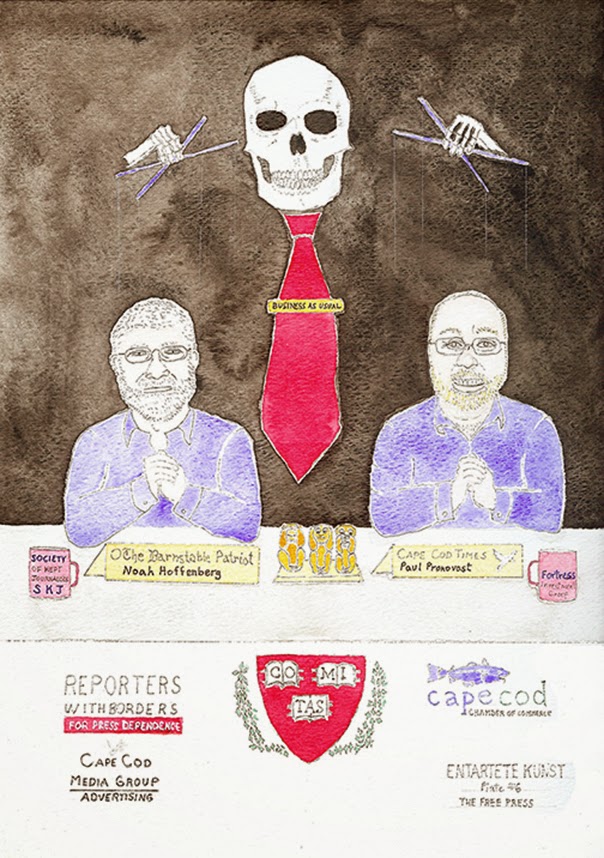 For reason, the US has sunken to #49 on the World Press Freedom Index compiled by Reporters without Borders.  The lack of a truly free press in America and is the result of a Faustian deal made by far too many journalists.  That deal mandates placing career above bold truth telling.  Far too many journalists are in cahoots with the chambers of commerce and advertizers and pillars of the community and political hacks, both local and national.
The local press hypocrites I decry are editors Paul Pronovost of the Cape Cod Times and Noah Hoffenberg of the Barnstable Patriot because issues of freedom of expression are not as important to them as shielding community pillars like Lucy Loomis who permanently banned me, my ideas, and the ideas of those whom I publish from my very neighborhood library without possibility of due process.  Both Pronovost and Hoffenberg refuse to publish anything regarding that egregious curtailment of freedom of expression.
Posted by G. Tod Slone at 5:06 PM 2 comments: