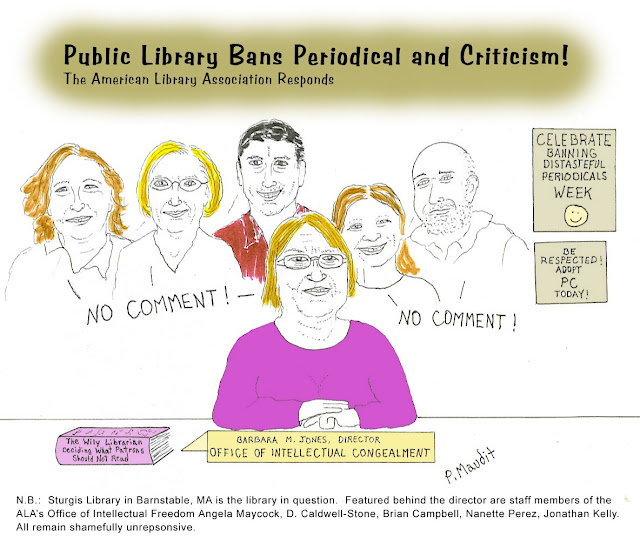 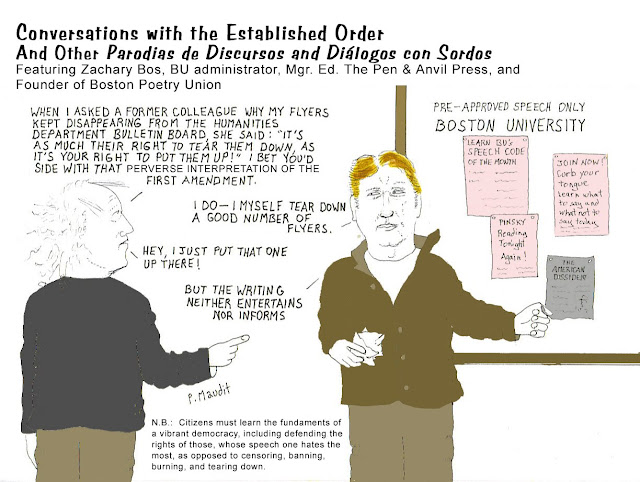 On the Indifference of Poets to the Censorship and Exclusion of Others
It has been my sad experience that most poets would not lift a finger to protest against the censorship, banning, and/or exclusion of a lone dissident poet. Indeed, to do so, would imply risking offending the poet herd responsible for the censorship, banning, and/or exclusion. The logic is there. The principles and courage, however, are not. Not one of the high-and-mighty chancellors—not even famous Beatnik chancellor Gary Snyder—of the Academy of American Poets came to my defense when I contacted each of them regarding the Academy’s censorship of my comments. Not one of them dared say, ‘you know, this is poetry, after all, and we’re even encouraging comments on our website, so maybe we should not be eliminating comments we don’t like, even if we do have the legal right.’

In any case, Zachary Bos is yet another one of those poets who dares not act alone and against the poet herd. He and I had a rather lengthy email discussion recently. Out of the blue, he’d sent me a group email regarding his Boston Poetry Union, which I’d never heard of. In fact, I’d never heard of him either. In the missive, the usual poet suspects Pinsky, Gluck, and Wright were revered, so I hammered. To his credit, Bos responded over and again and then some. Most established-order partisans do not respond at all to criticism because they do not believe in vigorous debate, cornerstone of democracy. They prefer dismissing adversaries (and their arguments) as “malcontent cranks,” in Bos’ words (with my regard). However, Bos made some, at least from my “malcontent crank” perspective, amazingly daft or outright shameful comments, including the one depicted word for word in the cartoon. He disagreed with everything I presented to him including the fact—I repeat, THE FACT—that my flyers have been banned by Sturgis Library director Lucy Loomis (see a previous post). Below is that segment of our long conversation. If anyone, besides Bos, can explain his reasoning, please do. Evidently, something deep within compels him to disagree with everything vis-a-vis The American Dissident and its editor, no matter how FACTUAL.

Bos likes to ramble on the semantics of the words “censor” or “banned,” diverting the conversation away from pertinent points made. Eventually, I was able to corner him in an area he’d rather not discuss: the fact that his employer, Boston University, has a rather pitiful free-speech record. Bos had stated, prior to my pointing that out, that he was very much against speech codes. So, I asked what he’s done vis-à-vis BU’s speech codes. Well, I’m still waiting for the response… unless of course it was “tearing down flyers” that question and challenge those very speech codes. I suspect that most gatekeepers, including Bos, who censor, ban, prohibit, and/or tear down, likely argue that they too are proponents of free speech and vigorous debate. Hypocrisy is, after all, rampant amongst the educated.

PM (P. Maudit)—The fact is simple: my broadside was prohibited by the library director. It’s mind-boggling that you and likely others would reject that fact as fact.
ZB—You are calling it a fact that what the director did was something that could be called "prohibition." Actually, this isn't a fact, but an interpretation. I can observe the same events, and come up with a
different set of facts. That isn't relativism; just an outcome of your ideological orientation. It's like you're looking through glasses smeared with oil on the lenses. "Everything's filthy!" Well, not really, George. Some things are, sure. But the way you describe events is simply unrecognizable.
Posted by G. Tod Slone at 9:21 AM 4 comments: