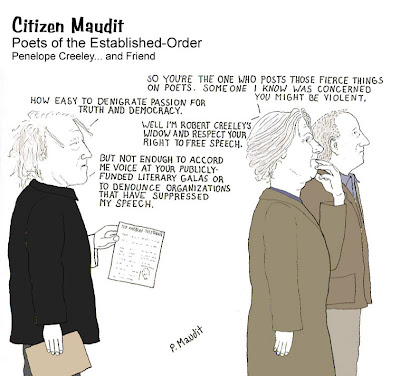 A previous blog entry described my protest against the anointing of Gary Snyder with the Robert Creeley Award in Acton (see http://wwwtheamericandissidentorg.blogspot.com/2010/03/fierce.html). The protest was staged because Snyder was a chancellor of the Academy of American Poets, which had censored and banned me. Snyder was indifferent to that censorship incident and banning. The directors of the Robert Creeley Award, including Bob Clawson and Penelope Creeley, were also indifferent to that censorship incident and banning. Clawson would later inform me that Penelope had mentioned during the ceremony that she respected my right to free speech, that is, to protest... as if I'd needed her "respect" with that regard. The cartoon explains why that "respect" was as vacuous as vacuous gets.
Posted by G. Tod Slone at 4:08 PM 28 comments: 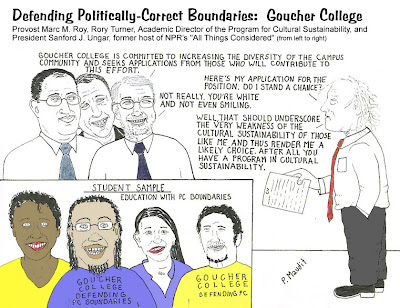 Notice of this blog was sent to the president, provost, members of the English and Cultural Sustainability faculty, and to student newspaper staff of Goucher College in the hope of inciting vigorous debate, cornerstone of democracy. One student eventually responded... anonymously. She (?) did not however respond to my critique of her response.

Why criticize Goucher College in Maryland? I don’t know anyone there or who even went there. Nevertheless, while hunting through the job lists I came across a want-ad for an English professor with the following stipulation, as accurately noted in the cartoon above: “Goucher College is committed to increasing the diversity of the campus community and seeks applications from those who will contribute to this effort.”

What that statement clearly implies is that job candidates are expected to espouse and foster and even somehow prove their adherence to a particular politically-correct viewpoint, one that evidently does not favor a diversity of opinions at all. Although Goucher is a private institution, its policy is still a slap in the face of democracy. Likely, the policy is legal. However, if the college states that it adheres to the principle of freedom of expression, it might not be legal. The cartoon, of course, is meant to satirize yet another instance of the PC-plague wreaking havoc in academe and stir up debate, though likely that won’t happen at all… unless of course Goucher’s faculty and student body are somewhat unique.

Diversity and multiculturalism have proven to be wonderful diversions away from truth and the courage to speak truth. Often, they serve as last refuge for sellout Sixties scoundrels. Today, universities in America are shamefully more likely to affix “diversity” in their academic mottos, web pages, and job ads, than “truth” and the “courage to speak unadulterated truth even and especially if doing so might prove offensive and otherwise harmful to ones career.” Sadly, academe seems to have become a refuge for careerists, not for truth tellers.

Administrators and faculty generally will not respond to criticism, unless forced. Vigorous debate is rarely if ever something they hold dear, which is why, in the context of these experiments in democracy, I also make it a point to contact the students at the helm of the college newspaper, in this case, The Q, whose motto is “Reliable, Trustworthy, Comprehensive.” Nevertheless, chances are slim that even one student contacted will prove sufficiently curious, courageous, and un-indoctrinated to actually respond. Comprehensive? We’ll see about that!

By the way, Goucher’s MA Program in Cultural Sustainability really exists (see http://www.goucher.edu/x33261.xml). Personally, I thought it odd, if not absurd, to devote an entire Master’s degree program to the topic, an evident specialty in the area of sociology. But such programs tend to proliferate in academe today because they reflect PC ideology and more importantly attract money for the professors and respective institutions. Will we ever see an MA Program in TRUTH and the COURAGE TO SPEAK TRUTH? Likely not! Would Goucher College ever hire a professor like me? Certainly not! Welcome to the brave new world of America.
Posted by G. Tod Slone at 3:16 PM 13 comments: