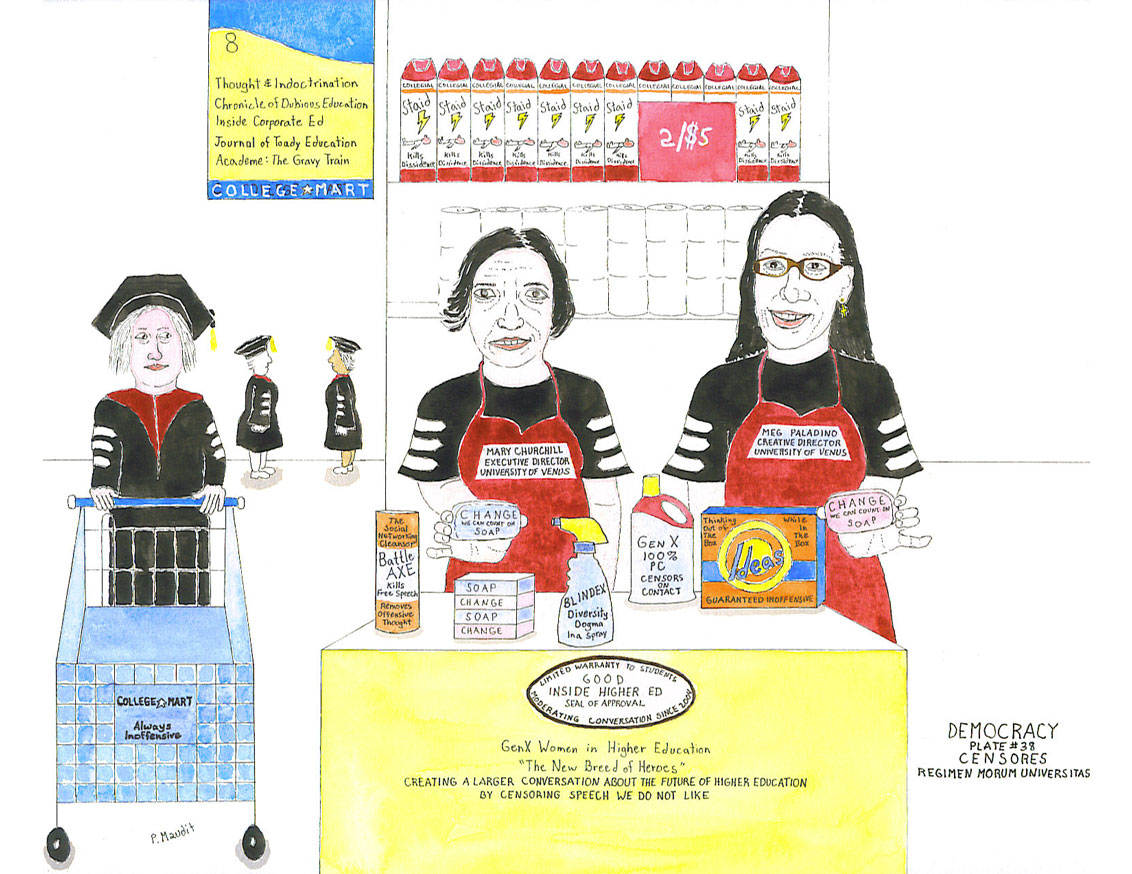 The above satirical watercolor was inspired by the censorship of the comment I posted on Inside Higher Ed regarding the mission statement presented by its new blogging duo of insipidity, the two women depicted in the sketch, the "new breed of heroes,” who created the University of Venus blog (see http://www.insidehighered.com/blogs/university_of_venus/mission_of_venus#Comments).
Inside Higher Ed’s other equally vacuous blogs include Mama PhD, Confessions of a Community College Dean, Provost Prose, University Diaries, and The Education of Oronte Chum (see http://www.theamericandissident.org/InsideHigherEd.htm). Ages ago, I’d asked corporate-minded Inside Higher Ed editor Doug Lederman if he would consider including The American Dissident blog with the other blogs listed on his Inside Higher Ed website. In the name of PC, restricted ideas, and limited debate, he chose not to respond. Evidently, The American Dissident blog would have been much too OFFENSIVE in its hardcore questioning and challenging of academics. Today, censors like Lederman were needed to protect the thin-skinned from potentially offensive thoughts and ideas.

Yes, there is a crisis in higher education, but you don’t seem to know what it fundamentally concerns: not flooded markets with overqualified applicants and limited budgets for junior faculty, but rather thinking in the PC box, rampant censorship, careerism, and absence of courageous rude truth telling. Your call for change echoes Obama’s hollow politician’s call for change.
“At University of Venus people raise questions that are not being raised and draw attention to issues that are being ignored,” you state, yet fail to illustrate that assertion with one concrete example. Why?
“…the lives we lead as GenX women,” you state. Will you thus be excluding men, both older and younger? And if so, is that not sexist and ageist? Will you also be excluding older women?
“University of Venus is a global space for building community, empowering people to share their voices and inspiring them to make change happen,” you stipulate, yet fail to underscore which people you seek to empower and what changes you seek to make.
“We are thrilled to be partnering with the expertise of Inside Higher Ed and to be joining with you in creating a larger conversation about the future of higher education,” you state. But are you aware that IHE acts as a PC censor, regularly censoring comments from its forums? Thus, your first step will have to be to accept IHE censorship and keep your feet firmly implanted in the PC box. Yes, change we can count on. Tell me about it, baby, or rather babies!
“If you are interested in writing a guest post or being interviewed for the blog, please send us an email,” you state. Well, I’ve just done that. Will you respond? Will you even be curious regarding my decades-long critique of higher ed (see www.theamericandissident.org)?

Needless to say, as an ardent enemy of censors and censorship, I expressed my indignation to the "new breed of heroes," one of whom responded, though in vacuous fashion:

George,
Thanks for contacting us. I think it is necessary for change to happen across the spectrum of viewpoints and I think your work is just as necessary as ours. Dissidence redraws the boundaries of what is possible.
Mary Churchill

In essence, Mary Churchill, the Executive Director of the University of Venus blog, ignored my censorship complaint. Can one possibly be more hypocritical? After all, how can one create “a larger [more diverse] conversation about the future of higher education” by censoring opinions on higher education that one does not like? By doing so that "larger conversation" will simply remain business as usual... though larger.
Posted by G. Tod Slone at 10:42 AM 1 comment: 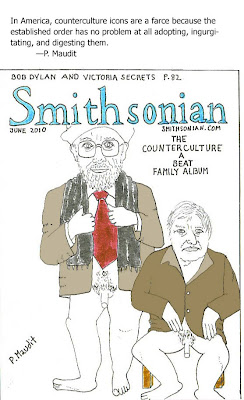 This toon was inspired by last month's issue of The Smithsonian, which featured, though not on the front cover, the photos of Beatnik academic Allen Ginsberg, who was, more than anything else, an expert marketer and literary ladder climber. In the long run, his poetry was not in the least threatening to the established order. Hell, Ginsberg became the established order, a bona fide high and mighty bourgeois member of the exclusive American Academy of Arts and Letters.
Posted by G. Tod Slone at 9:03 AM 6 comments: