Hypocrites Always at the Helm
Below are two comments I made on FrontPage magazine's website.  Both automatically posted, one about two months ago, while the other only yesterday, which explains its title.  The day after posting, each was consciously and purposefully censored by the David Horowitz Freedom (i.e., Censorship) Foundation.

After the first censorship incident, I wrote Michael Finch, David Horowitz, and Professor Walter Williams.  Horowitz and Finch did not deign to respond.  Williams did.  Our correspondence follows the two posts.  Williams response was, of course, in support of censorship and via unoriginal vacuous semantics.

Poets like Michael Finch can be very fragile creatures.  Criticize their flaccid poesy and so many of them will fall into pieces...

To Be Censored (Questioning and Challenging
NOT Permitted Here When It Concerns Us)
One must wonder why poetry reviews must always be glowing.  In fact, one must wonder if reviewer Betty Mohr even possesses the intellect to wonder about that.  It is a strange conundrum of sorts.  Sadly, a negative review will likely not result in publication.

It is odd that only two reviews of poetry have appeared in recent times in FrontPage magazine and both of one book, Finding Home, by Michael Finch, president of the David Horowitz Freedom Center in Los Angeles, which sponsors FrontPage.  Egregious conflict of interest?  You bet!  And how utterly odd to state that Finch “fights every day to preserve America’s liberty, its religious freedom, and its unique culture,” for Finch favors the elimination (censorship) of comments (liberty of expression) that are not glowing with regards his writing.  Aberrant?  You bet!

Even more curiously irrational is the comment made by Finch hagiographer reviewer Betty Mohr  (Le Bon Travel & Culture):  “Indeed, Finch grasps the importance of art in the battle to preserve America.  Art, whether in fiction, in drama, in film, in painting, and in music conveys the force of philosophy. Those who control the field of artistic communication have had such a powerful impact on the spread of bad ideas that they have brought our country to the edge of a political and cultural abyss. The antidote for change requires that new patriots not relinquish the field of art to America’s enemies. Finch’s poetry is an important step in that right direction.”

Indeed, but how do “poignant excerpts from Finding Home” possibly constitute an “antidote for change”?  And does not the censorship (i.e., exclusion) of this very comment constitute one of those very “bad ideas that they have brought our country to the edge of a political and cultural abyss”?  Well, REASON has never been the forte of ideologues, left or right-wing.

For my censored comment—review of a review (and please don’t get bogged down in semantics and the official definition of censorship)—vis-a-vis the last glowing review, see below this comment, which is posted here:  http://wwwtheamericandissidentorg.blogspot.com/2016/02/michael-finch.html.  Also, check out the cartoon I drew regarding it, Walter Williams, and David Horowitz:  http://wwwtheamericandissidentorg.blogspot.com/search?updated-max=2015-12-23T06:28:00-08:00&max-results=7 .

Let No Act of Censorship Go Uncriticized
FrontPage, an online right-wing journal, had rightfully been denouncing the increasing incidents of left-wing assaults on freedom of speech, especially with regards the shutting down of debate and creation of safe spaces and speech codes, on college campuses across the country from Yale to Missou to Smith to Vasser.

What had provoked me to comment, in the first place, was the very crux of the review, as clearly stated by the reviewer:  “But as many conservative writers such as Andrew Klavan and myself have noted for years, reclaiming America means reclaiming the culture, and that means engaging in the arts.”  Contrast that statement with the rather innocuous verse presented by the reviewer, as if somehow that verse would help in “reclaiming the culture.”  Mind-boggling!

In my initial comment, I criticized the crux statement as insufficient.  Indeed, mere “engaging in the arts” would accomplish little if anything.  What was needed was active questioning and challenging of the “arts” machine, which I’ve come to term the academic/literary established order. The poem fragments taken from FINDING HOME: POEMS IN SEARCH OF A LOST AMERICA clearly did not even remotely attempt that.  Note, for example:

My mind remembers a soft, warm wind,
Sweet earth scent, and billows of clouds
In a wide prairie sky of youth’s eternal hope.
Where have you gone?

Now, how might those lines even remotely help the right-wing in “reclaiming the culture” in an effort to establish… its particular forms of censorship, let alone expose the lack of objectivity, egregious hypocrisy, and especially visceral knee-jerk rejection of any criticism regarding the left-wing “arts” machine?  Here’s another verse presented by Tapson:

Years from now when the winds blow again,
When you stare at the midnight’s blue of
The setting sun, lined mountains black against
A cobalt sky, do one thing for the one who loved you:
Think of me when your eyes gaze at the wondrous sky,
Your eyes searching the heavens for one,
When the breeze blows one last time through your hair,
Do one final thing. Think of me.

Another big problem with the “arts” machine is the M.O. of egregious backslapping and self-congratulating.  In that sense, Tapson partakes in it, promoting the poetry of his admitted “friend.”  What else is new, eh?  Frank Kotter, whose comment was not censored by the moderators, sums up the inanity confronting poetry today.

I have not heard such touching and meaningful prose since Paul de Lagarde. May this also usher in a new era in our nation's consciousness just as those have who come before you.  I have ordered but am disappointed to see it is not offered in hard cover—A shame as this book will be cited in history books in centuries to come.

More often when someone like me questions and challenges the “arts” machine (i.e., the academic/literary established order), the latter will respond with proverbial deafening silence.  Imagine, for example, I had the gall recently to question and challenge the new poet laureate of Boston, Professor Danielle Legros Georges, who, as the Boston Globe headline stated, “wants to make poetry comfortable for all.”  Of course, by simply mentioning that fact here, I greatly lessen my chances of getting this essay published because it contravenes the first commandment of the “arts” machine:  thou shalt not criticize poets!

Because I’d sent my critique to the student newspaper editors of Lesley University, Legros Georges’ employer, and only cc’d it to her, she called me “cowardly” in her response and wrote that if I really wanted debate then she was ready for it.  So, I wrote with that regard… and received no response!  Then days later, I wrote again, asking what happened to the will for debate.  And again, no response was received.  In essence, that deafening silence was the reason I’d chosen to write the student newspaper.  My long experience dealing with machine literati was deafening silence.  Sadly, my experience with student journalists had not proven much better, though a little bit.  Considering the innocuousness of the poem fragments illustrated in Tapson’s hagiography (for the entire piece, see
http://www.frontpagemag.com/fpm/260860/finding-home-poems-search-lost-america-mark-tapson),  Michael Finch should have no problem at all getting published in “arts” machine magazines like Agni, Ploughshares, and Poetry magazine.


Finally, Thoreau famously urged:  “Let your life be a counter friction to stop the machine.”  To that, I’d add left or right-wing machine.   And tis better to chime with Thoreau, than climb the ladder in search of vacuity, that is, fame, awards, invitations, tenure, and all the other crap serving to muzzle the truly cowardly like left-wing Legros Georges and right-wing Michael Finch…

From: George Slone
Sent: Tuesday, November 24, 2015 8:19 AM
To: wwilliam@gmu.edu
Subject: Your concern for liberty for your fellow man...

To Walter Williams,
If you are not the person, though I believe you are, who wrote the article on Free Speech in today's FrontPage mag, then ignore this missive.  If you are, however, then you did write:  "Most people want liberty for themselves. I want more than that. I want liberty for me and liberty for my fellow man."

BUT do you really want liberty for your fellow man?  FrontPage mag censored my comment several days ago.  It censored my liberty.  I protested that act of censorship to Horowitz and Tapson, but nobody deigned to respond, proving the right-wing is also into censorship.  If you truly cared about my freedom of speech, you would stand up and send a protest letter to Horowitz.  Why not tell him he ought to follow Jonathan Turley's policy of NOT moderating (i.e., censoring) comments.  Likely, you will not do that.  And that would answer the question about your desire of liberty for your fellow man.  The email and my censored comment figure below.  You will note the absence of threats, prohibited words, etc. in it.

One’s right to free speech does not impose an obligation that others to provide a forum for him.
Cheers.

To Prof. Walter Williams,
For the new cartoon on you, see attached or wwwtheamericandissidentorg.blogspot.com .

BUT do you really want liberty for your fellow man?  FrontPage mag, which publishes your essays, censored my comment several days ago.  It censored my liberty.  I protested that act of censorship to Horowitz and Tapson, but nobody deigned to respond, proving the right-wing is also into censorship.  If you truly cared about my freedom of speech, you would stand up and send a protest letter to Horowitz.  Why not tell him he ought to follow Jonathan Turley's policy of NOT moderating (i.e., censoring) comments.  Likely, you will not do that.  And that would answer the question about your desire of liberty for your fellow man.  The email and my censored comment figure below.  You will note the absence of threats, prohibited words, etc. in it.

[No further response from the Professor, who of course does NOT want liberty for me...] 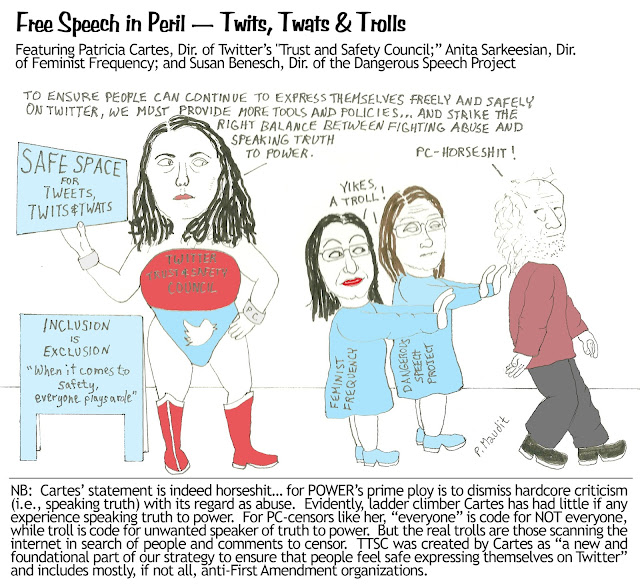