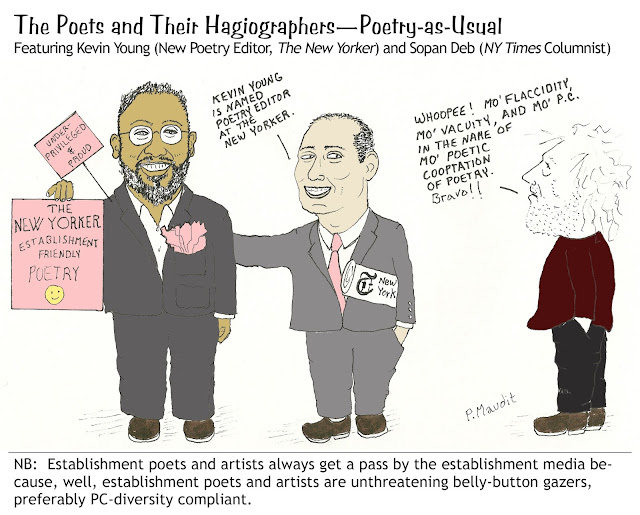 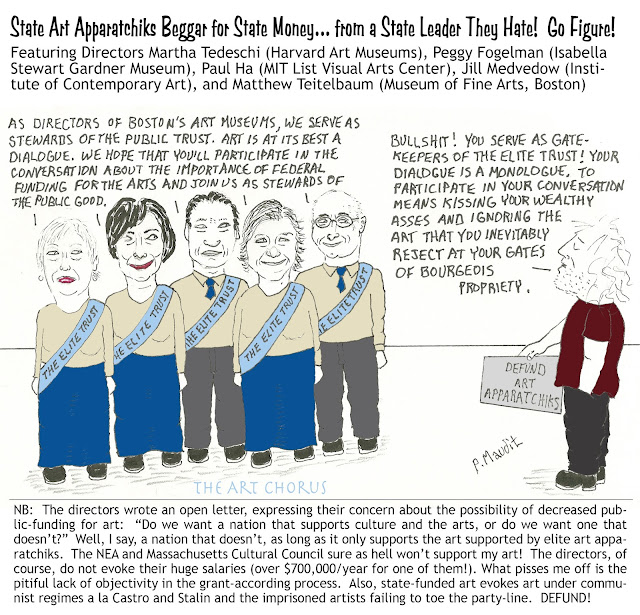 
The following was sent to the Boston Globe brick wall as an Op-Ed.  The Globe did not respond.  We, the Plebes w/o Voice...


State Art... or Freedom of Art?
They have huge salaries.  One of them was making over $700,000 per year!  They attend elitist cocktail parties and dwell in gated communities… and yet they argue, “As directors of Boston’s art museums, we serve as stewards of the public trust.”  Well, the reality is they serve as gatekeepers of the elite trust, deciding what gets in and what stays out.  Now, of course, you won’t read about that in “Boston Arts Leaders Signal Alarm over Possible Federal Cuts," written by Boston Globe Arts Propagandist Malcolm Gay.

They, by the way, are directors Peggy Fogelman (Isabella Stewart Gardner Museum), Paul Ha  (MIT List Visual Arts Center), Jill Medvedow (Institute of Contemporary Art), Martha Tedeschi (Harvard Art Museums), and Matthew Teitelbaum (Museum of Fine Arts, Boston).
And so, of course, worried about their elitist sinecures, they express grave concern, “we are alarmed at reports that the National Endowment for the Arts is under threat of being abolished, along with the National Endowment for the Humanities and the Corporation for Public Broadcasting.  Each of these entities champions art and culture in communities across America.”
The question they purposefully do not address, however, is the egregious lack of objectivity in the selection process.  Ever listen to NPR?  Ever tried to get a grant from the NEA when you’ve been critical of the NEA?  Or how about from the Massachusetts Cultural Council?  Well, I have… and have given up!
What “collections, exhibitions, and teaching” are permitted entry though their gates?  Might there be just one piece of art critical of them hanging in their museums?  Might their “transformative art education programs” serve as thinly-veiled indoctrination programs?  After all, isn’t that the fundamental purpose of state art?  Does “the preservation and presentation of diverse cultural expression” exclude not only un-PC expression but also criticism of state-art apparatchiks and their organizations, including those museum directors and their museums?
“We share the belief that access to the arts is at the core of a democratic and equitable society,” they argue, while the fundamental question inevitably is not addressed:  whose arts? “Art is, at its best, a dialogue,” they proclaim from within their comfy sinecures.  Yes, it is a dialogue, but only if you’re one of the lucky ones to be invited to their cocktail parties!
“We hope that you’ll participate in the conversation about the importance of federal funding for the arts and join us as stewards of the public good,” they conclude.  And of course “participate in the conversation” means speaking like they do and for the good of the elite, certainly not for that of the public.  They are stewards of the elite good, not of the public good!
Evidently, for anyone who actively questions and challenges the pabulum dished out to We, the Plebes, and does not speak Artspeak, as in Orwellian Newspeak, art is far from being a “dialogue.”  Instead, the reality of art is, at its present, don’t buck the art system, don’t make waves in the art community, and don’t go against the grain of art apparatchiks, or be fully ostracized from the purported art dialogue and otherwise outlawed from the art conversation.  Now, would they permit this essay in their dialogue and conversation?  Of course not!
“Do we want a nation that supports culture and the arts, or do we want one that doesn’t?” asks Paul Ha.  Well, clearly he misses the point:  do we want the Chamber of Commerce (i.e., Government) to decide what art is okay and what art is not okay?  Do we want state art or do we want freedom of art?  Well, I choose the latter… to the likely displeasure of the five wo-is-us art apparatchiks…