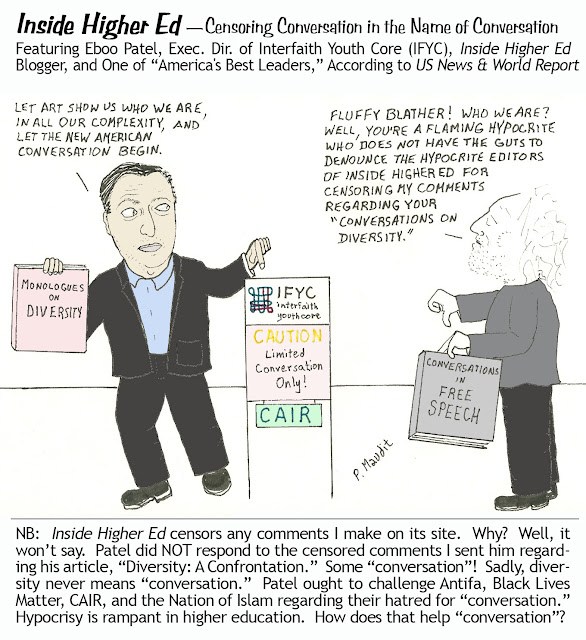 
Censoring Conversation in the Name of Conversation
Only in Higher Education
“Vituperation? Incoherent?” Haha. With this kind of censorship and this kind of groupthink, perhaps they should change the website to "Inside (the Bubble of) Higher Ed.”
—Timothy Bearly

When I’m on the hunt for grist, I usually turn to Poets & Writers magazine.  However, Inside Higher Ed is also a great provider (e.g., groupthink inanity and safe blather).  It highlights a handful of blogs.  “Conversations on Diversity,” evidently not a very original subject in academe, is one such blog.   On the contrary, my blog is not highlighted on IHE.  It could be titled, “Conversations on Freedom of Expression… with a Particular Emphasis on the Academic/Literary Establishment.”  Brown privilege accords voice to Eboo Patel, Executive Director of Interfaith Youth Core (IFYC).  As for me, I am not accorded voice because I dare criticize the diverse hands that feed, including IHE.  Over the years, I have been openly critical of editors Scott Jaschik and Doug Lederman (see, for example, https://wwwtheamericandissidentorg.blogspot.com/2019/04/scott-jaschik-and-doug-lederman-inside.html, https://wwwtheamericandissidentorg.blogspot.com/2017/08/doug-lederman-and-scott-jaschik.html, and https://wwwtheamericandissidentorg.blogspot.com/2017/08/scott-jaschik-and-doug-lederman.html).

Inside Higher Ed is of course a business.  Academe is a business.  Free speech is always a threat to business, which is why it is generally suppressed and/or punished by business.  And of course free speech is not really free at all when it is punished.  In any event, Patel begins his blog essay, “Diversity: A Confrontation,” by quoting one of his favorite black-privileged poets, Gwendolyn Brooks:  “Art hurts. Art urges voyages—”  Yet the art that I see nowadays does not hurt at all and does not at all urge voyage.  No matter.  Brooks’s line is certainly sufficiently general to fall into the establishment safe box of acceptability.

Patel is clearly a diversity ideologue.  And of course reason and facts that don’t fit the narrative have no place in ideology, be it right-wing or left-wing.  It is always easy to find faults in the ideological pronouncements of ideologues.  Patel’s essay focuses on a small neo-Nazi march (a couple of dozen people) purportedly against immigrants (illegal? wage-lowering? criminal?) in Georgia and the protest response against it:  the hanging of portraits of different racial and ethnic faces around Newnan, the town in question.
“One of the pieces depicted two young Pakistani American women wearing the Muslim head scarf, and Newnan-area Facebook groups lit up with comments like, ‘I feel like Islam is a threat to the American way of life. There should be no positive portrayals of it’,” writes Patel, “(It should be noted, many Newnan residents pushed back against this racism—a positive sign.)”.

And yet are not the head scarf and burqa signs of female oppression in, for example, Iran and Qatar?  Patel fails to mention that.  He also fails to mention how Islam benefits democracy (e.g., freedom of expression).  Indeed, where in the world has Islam benefited democracy?  Saudi Arabia?  Africa?  Sweden?  Pakistan?  Do rape epidemics and grooming gangs benefit democracy in England?  Islam might benefit diversity in the short run, but sure as hell does not benefit democracy.  Islam runs counter to freedom of expression, a prime cornerstone of democracy.  Islam is not a religion of peace, despite CAIR and Obama’s attempts to portray it thus.  Also, Patel pushes the false narrative that somehow Islam is a race.  It is not a race!  A person who criticizes Islamic doctrine is not a racist.
“I wonder what it would look like for a college campus to do a similar project [i.e., hanging up portraits of different racial and ethnic people],” suggests Patel.  “Well, I would add a little twist to that suggestion.  What if in addition to portraying the racial, gender, ethnic, religious and sexual diversity, we could portray the worldview diversity as well?”

Hmm.  I’d rather suggest something far more courageous and advantageous to democracy:  highlighting not skin color, sexual orientation, and religion at a college campus where those things likely constitute the prime monkey-see, monkey-do focus, but rather instances where professors and students actually dared stand up on their hind legs to criticize professors and students and administrators at the very college in question.  Now, how would Inside Higher Ed respond to that?  The silence of the academic editors, of course, would be the likely response.  After citing Brooks’s line (see above), Patel writes:  “Note the dash at the end. I’ll get to the phrase that follows at the end of this piece.”  Well, one would expect something a little bit stirring, but here it is:

Art hurts. Art urges voyages—
And it is easier to stay at home.


Brilliant, right?  Well, can it get any more innocuous than that?  How would that verse possibly upset (i.e., stir) the art and poetry establishment, not to mention the academic establishment, including Inside Higher Ed?  Patel’s final statement is equally feel-good innocuous:  “Let art show us who we are, in all our complexity, and let the new American conversation begin.”  Now, if Patel really would like to open up the borders of permitted “conversation,” as opposed to simply echoing the diversity monologue, then he ought to confront the editors of Inside Higher Ed and ask them why they reject all criticism (conversation!) with their regard.  He ought to ask them why they censor any comments that I dare make on their website.  Isn’t higher ed supposed to be about freedom of expression?  He ought to also challenge Antifa, Black Lives Matter, the Nation of Islam, and CAIR for their anti-white racist stances and hatred for freedom of expression.  Small groups of Neo-Nazis are certainly not the only threat to freedom of expression.  Ah, but Patel is interested in diversity, not freedom of expression/not “conversation.”  Will he respond to the points made in this counter-essay?   After all, he was once named by US News & World Report as one of America's Best Leaders…
Posted by G. Tod Slone at 7:18 PM No comments:

A Brief Critique of an Inside Higher Ed
Announcement Hit-Piece

The problem with “Charles Murray to Return to Middlebury College” is clearly the bias of the writer, Greta Anderson.  "Controversial" writer, as she labels—essentially disses—Charles Murray is clearly a subjective term.  Shouldn’t an announcement be objective, as opposed to pushing the left-wing narrative?  Clearly, Murray is NOT "controversial" to the group inviting him.  How does Anderson write "widely condemned by social scientists" wi/o presenting an iota of proof to back that negative criticism?  Moreover, might the bulk of those scientists be “left-wing globalists,” a denigrating term that might be used by right-wingers?  How can Anderson evoke the Southern Poverty Law Center w/o mention of the group’s extreme left-wing bias, as well as its other recent problems?  Moreover, the SPLC’s "white nationalist" kill-the-messenger slur has become so overused today by “left-wing Stalinists” and “black nationalists” that it has become essentially meaningless, just like the term "nazi."  Indeed, dismiss me as a "white nationalist" because I criticized Anderson's "controversial, Stasi-like" write-up.  BTW, I am a Middlebury alumnus.  Think!  Get out of the groupthink box!
G. Tod Slone, Ed.


The American Dissident
Posted by G. Tod Slone at 5:33 AM No comments:

OPEN LETTER TO THE STAFF OF THE STROBE
By Professor G. Tod Slone

It is utterly amazing to me that your newspaper has refused to publish anything relative to the corruption that currently exists behind the scenes at Fitchburg State College.  I brought this concern, which deeply affects the quality of student education, to your attention on several occasions in several different letters and to a staff member in person.  The staff member assured me that she had intended on visiting my office to interview me.  When will that be?  Next year when I'm no longer here?  You have chosen to ignore my letters and behind-the-scenes corruption.  Even a student of mine told me that you would not print anything he submitted about the matter.  The local newspaper, The Sentinel, will not print anything either.  Moreover, the faculty refuses to respond to my concerns.

What kind of institution and town is this?  Does former president Mara still own you, the faculty and the town too?  Has your advisor or an administrator put a gag order on what you may or may not print?  Or is ignoring corruption your own initiative?

I am ashamed for you, the faculty and all other participants who have helped keep quiet the various instances of unethical and unprofessional behavior perpetrated by some department chairpersons and other administrators.  For you and them, I have written the following poem:

decry iniquity or be part of it, like it or not
there can be no real in-between
don the cloak or shed it

decry what you see and hear, or live as automaton cadavers
fulfilling the purpose and nefarious dreams
of the authoritarians who dictate your lives

decry the foul behavior of those with whom you rub elbows
or make excuses for them and for you and
turn on, or at least ignore, the one who decried, for he,
because of you, shall be alone and vulnerable

so easy and comfortable for you, it is,
to rationalize...

WHY
YOU
DO
NOTHING


IN THE FACE OF CORRUPTION.
Posted by G. Tod Slone at 6:05 AM No comments: 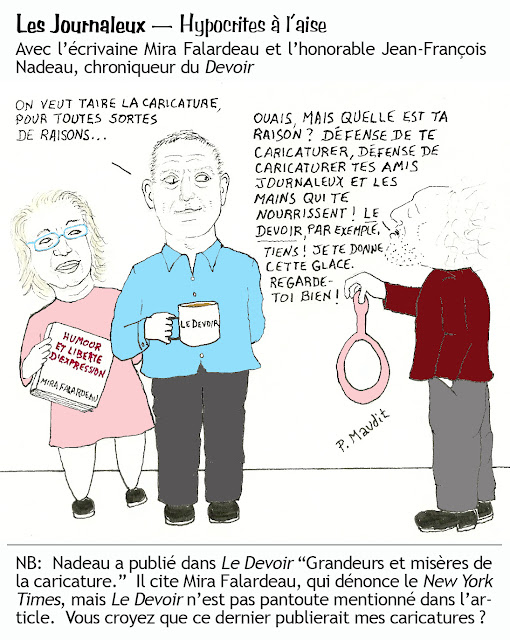 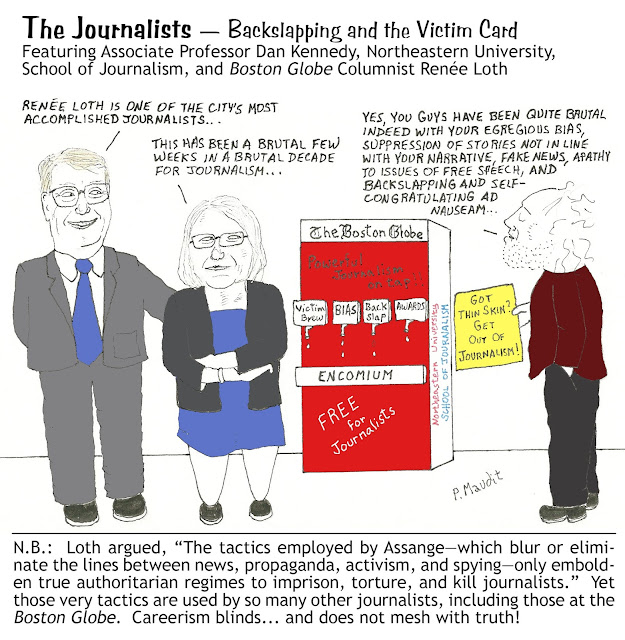 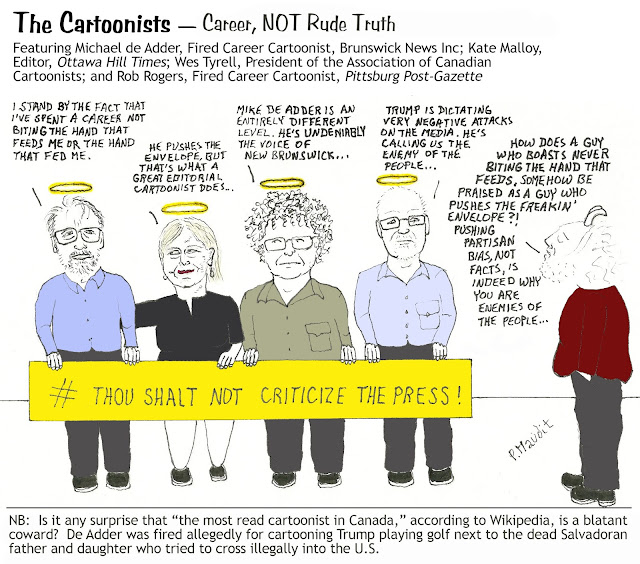 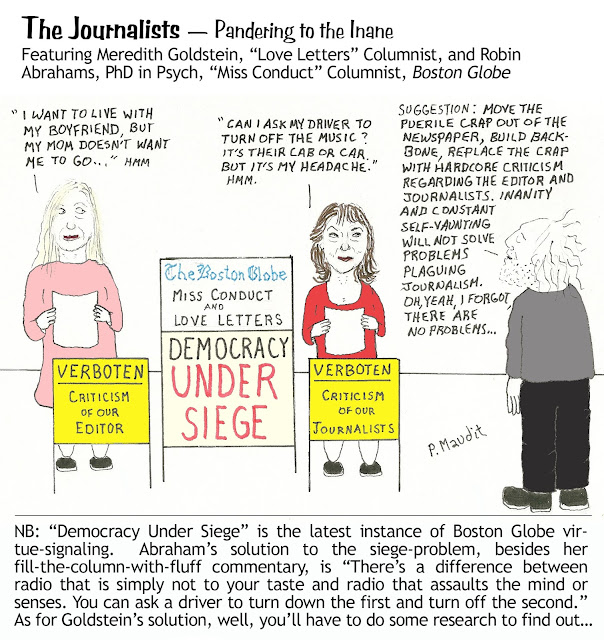