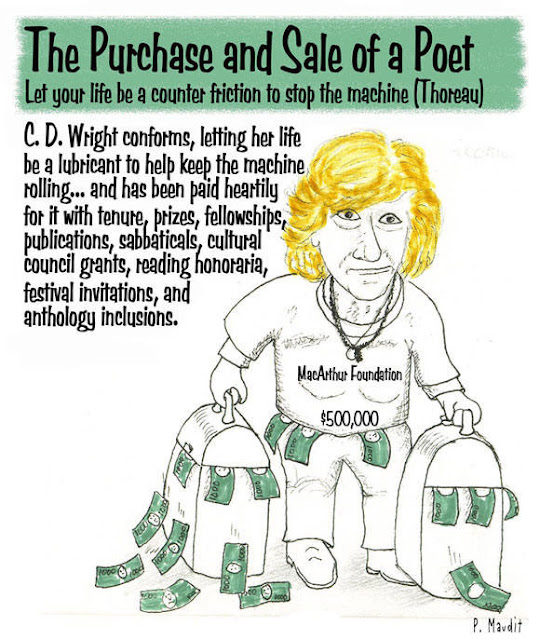 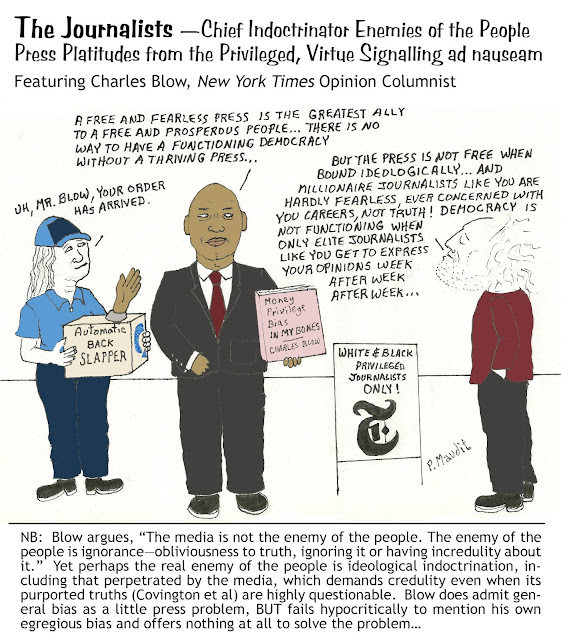 ..............................................................................................................................................
The Press… Not So Free… Thanks to the Press
“The Enemy of the People Is Ignorance” was the title presented on the front page of the New York Times and without mention of the author.  So, I clicked on it.  The title became “Defending the Free Press” with the subtitle:  “Expression, and the right to publish it, is a human right. And yet, President Trump continues to disregard this.”  Likely, I would not have clicked on the article if I’d known propagandist (i.e., opinion columnist) Charles Blow was the author, and it was yet another anti-Trump screed.
Blow’s article begins with “The media is not the enemy of the people. The enemy of the people is ignorance — obliviousness to truth, ignoring it or having incredulity about it.  There is no way to have a functioning democracy without a thriving press.”  Well, that sounds fine, BUT until the press takes a long hard look into the mirror, its credibility will continue to shrivel.  Perhaps the “enemy of the people” has also become egregious press bias and all the news that fits the press anti-Trump narrative.  Well, Pravda, the press, certainly thrived in the former Soviet Union.  Thus a “thriving press” certainly does not guarantee a “functioning democracy” at all.
Egregious bias has certainly killed Blow’s credibility as an objective journalist… and shouldn’t journalists be objective, opinion columnists or whatever?  Does Blow present anything new in his article or simply more of the same ole Pravda-like propaganda?  And by congratulating the press, Blow of course congratulates himself, arguing that “One of the great missions of the press is to hold power accountable by revealing what those in power would rather hide. Corruption depends on concealment. Accountability hinges on disclosure.”  One might ask whether or not the press, Blow included, did that regarding Obama and Hillary, during their reign of power, and also now regarding Spy Gate.   Why not hold press power accountable by revealing what stories editors and journalists in power would rather hide and do not report?
Blow continues his encomium:  “A free and fearless press is the greatest ally to a free and prosperous people. And, the kind of dogged, unrelenting pressure that reporting requires demands a professional press. People who can make a living and feed a family as they labor away ferreting out the truth.  And, I speak here liberally about the profession, from cable news to YouTube, from a big city daily to a blog.”  He cites statistics, as if somehow they were decisive and inevitably reflected reality.
The problem of course is whether or not the press is really free or can be free when it is so egregiously biased.  And how can such bias reflect well on a so-called “professional press”?  And what about journalists like Blow, who become millionaires by pushing NOT the rude (career-damaging) truth, but rather the press party-line as in victim and without fault?  And how do we have democracy when only elite privileged journalists like Blow get to express their opinions week after week, whereas plebes like I do not?  And why does Blow not even mention the trend of YouTube, FaceBook and Twitter censorship, as if it weren’t even occurring?  Instead, he states in full willful ignorance, “He [Trump] has threatened Facebook, Google and Twitter, saying they’re ‘treading on very, very troubled territory and they have to be careful,’ whatever that means.”  Yes, whatever that means…
Then Blow gets down to the real purpose of his column:  “No one loves a catchphrase more than Trump.  He loves labeling. He loves to yoke his enemies with silly, derisive monikers, to reduce perceived weakness to bumper sticker legibility.”  Now, if only we could get Blow and his press colleagues to look in the mirror at their own “silly, derisive monikers,” from nazi, racist, anti-semite, islamophobe, white supremacist, and “beastly base.”  What flaming hypocrites!
Blow argues, “The weaker the media, the strong [sic] the demagogue. The road to authoritarianism winds its way through darkness.”  Well, one could also easily argue that the stronger the media (think Pravda or the BBC), the stronger the authoritarian ideology (think multiculti-diversity-identity politics) it supports and the road to that winds its way through the media itself and state education.
Blow argues, “He [Trump] wants to so blur the line between truth and lies that he’s exhausted our stamina for discernment.”  It seems again that the media, Blow included, is unable to focus on its own blurring of the line between truth and lies, as in Covington, Russian collusion, and islamophiliac delusion.  Surprisingly, Blow in his conclusion argues that the media is not perfect, though in a far too general, thus not really damning, way, failing to inculpate himself with any particulars at all.

Well, that day, the one Blow seems to fear, usually comes periodically whenever Democrats are in power and the so-called free press having endorsed them, becomes perhaps not cowed, but rather fully kowtowed and ever laudatory.  Moreover, to “understand,” as Blow says he does, is by no means an effort to address let alone work to solve those festering problems, which inevitably results in a not-so free press.  The enemy of the people is ignorance.  But then ignorance is bliss.  And the press seems to want to keep the people—well, half of the people—blissful with its continuous flow of propaganda.  So, the enemy of the people, well the other half of the people, is the press.  In other words, it’s a wee bit more complicated than the left-wing’s Trump bad/press good press mantra… 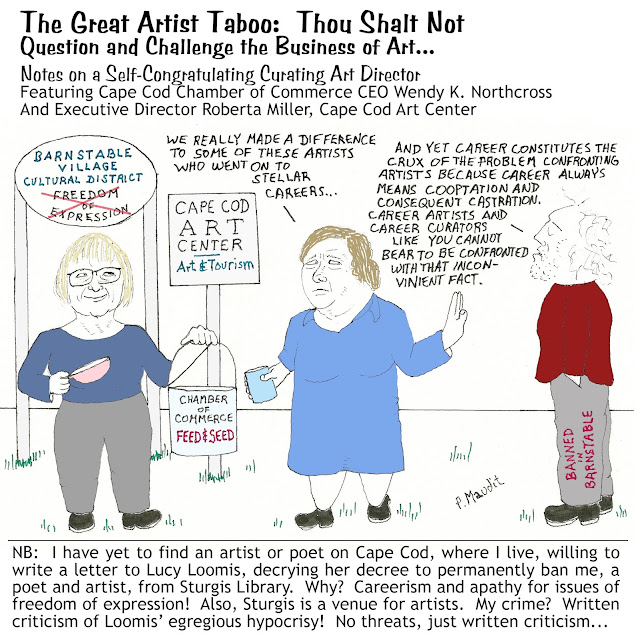 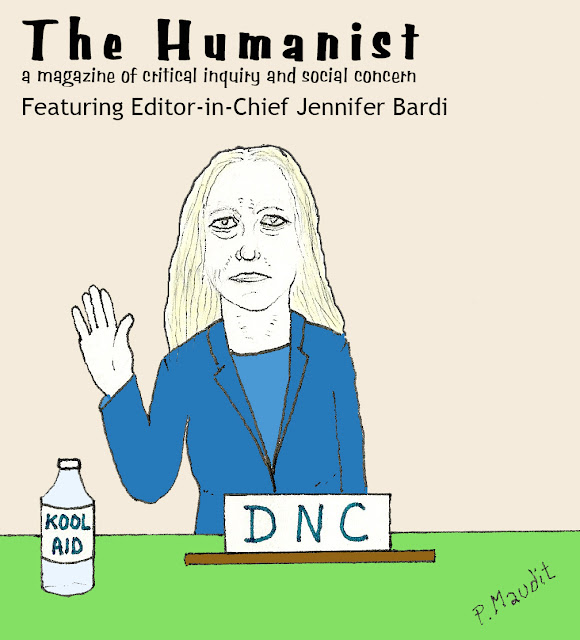 Notes on the Religion of Humanism—
An Inhumanist Critique of The Humanist
Wikipedia defines “humanism” as “a philosophical and ethical stance that emphasizes the value and agency of human beings, individually and collectively, and generally prefers critical thinking and evidence over acceptance of dogma or superstition.”  The Humanist, “a magazine of critical inquiry and social concern,” adds to that definition “hip and high-brow humanism for the modern freethinker,” which inevitably results in a highly-subjective, thus self-protective, definition.  And so, what might happen when a freethinker dares to actually criticize the magazine and its editor?  Perhaps that would  automatically render him or her insufficiently hip, insufficiently high-brow, and insufficiently modern.  And, of course, quite unsurprisingly, the editor in full disdain for democracy, will NOT respond.
After leafing through three issues of The Humanist, which I’d picked up in a library free magazine box, I inevitably concluded that humanism had been coopted and oddly become a sort of PC-religion for those who purportedly rejected religion.  Humanism, at least that espoused by the magazine, which was an organ of the American Humanist Association, had clearly become an echo of Democrat-Party ideology—black good/white bad identity politics, white-privilege BS, prisoners good/cops bad, global warming fact/not theory, hate Trump ranting, cultural appropriation, transgender bathroom issues, and of course racism, racism, racism ad nauseam.
The Humanist would have at least been honest if it had instead called itself The DNC, “a magazine of critical ideology and socialist leaning.”  Alas, how can ideologues possibly be honest?  And so, we have members and followers—not real individuals—, conferences, and of course Humanists of the Year, Humanist Arts Award and Feminist Humanist Award recipients.  Ijeoma Oluo was the black-privilege recipient of the latest FHA, who, according to the white Editor-in-Chief of the magazine and Deputy Director of the American Humanist Association, Jennifer Bardi, “challenges white humanists to do the hard work of addressing privilege in order to change the system that so benefits us…”  Original statement… or rather just more PC, where privileged people of one color yack about privileged people of another color?  How exciting!
“The Universal Declaration of Human Rights Turns Seventy” is the one article that really grabbed my attention.  It appeared in the December issue and was written by Duane Paul Murphy (Fall 2018 editorial intern at the American Humanist Association).  Its egregious omission of the European Court of Human Rights (ECtHR) mind-boggling decision in October against Elisabeth Sabaditsch-Wolff and Article 19 of the UDHR is shameful, to say the least!  How could Murphy possibly have ignored that horrendous decision, especially since he quoted Article 19?

Everyone has the right to freedom of opinion and expression:  this right includes freedom to hold opinions without interference and to seek, receive, and impart information and ideas through any media and regardless of frontiers.

Why did The Humanist remain silent regarding that egregious omission?  Well, perhaps ISLAM is the reason.  “The Court found [in conclusion that in the instant case] the domestic courts carefully balanced the applicant's right to freedom of expression with the rights of others to have their religious feelings protected […],” noted the ECtHR, which determined that “religious feelings” of Muslims trumped freedom of speech.  Sabaditsch-Wolff rightly argued with that regard:

In other words, my right to speak freely is less important than protecting the religious feelings of others.  This should ring warning bells for my fellow citizens across the continent. We should all be extremely concerned that the rights of Muslims in Europe NOT to be offended are greater than my own rights, as a native European Christian woman, to speak freely.  I am proud to be the woman who has raised this alarm.

Sadly, the ECtHR decision did not ring warning bells at all to DNC, uh, humanist ideologues.  Murphy, hypocritically, concluded his article:  “Humanists must show solidarity in acting to uphold the Universal Declaration of Human Rights and continually define and protect human rights and civil liberties for all people.”  Yeah, sure, but what about Sabaditsch-Wolff’s rights and liberties?   And why precisely did my poem, “A Post-Mortem Poem for Maren Ueland and Louisa Vesterager Jespersen,” not suit the “editorial needs” of The Humanist?  Both Ueland and Jespersen were tortured, raped, and beheaded by Islamist haters of Article 19 in Morocco.  What about their rights and liberties?  Silence!  BTW, that poem was rejected less than one hour after I’d sent a satirical cartoon to Bardi, depicting her swearing allegiance to the DNC.  Thin skin?  Perhaps The Humanist ought to add that to its definition of humanism, as in Gen-X thin skin.
Perhaps also it is time that religion be defined as ANY ideology, including humanism, where fact and reason are rejected whenever they might challenge the doctrine in question, as well as the doctrine’s partisans.  In conclusion, so much unoriginal PC-echoing vibrates intrinsically throughout The Humanist.    Will the editor-in-chief respond to this critique, that is, with something more substantial than “doesn't suit our editorial needs” and “We wish you the best in placing it elsewhere and thank you again for thinking of us”?  Ideologues hate debate.  Ideologues hate freedom of speech.  As a life-time atheist, who rejects ideology, including that of the DNC, what might I be?  Well, I can’t be a humanist because humanists embrace that ideology.  Perhaps I am therefore an inhumanist?