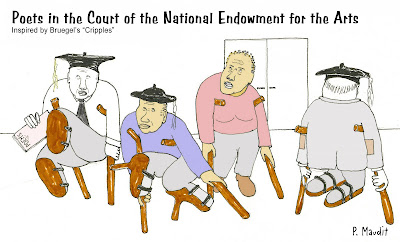 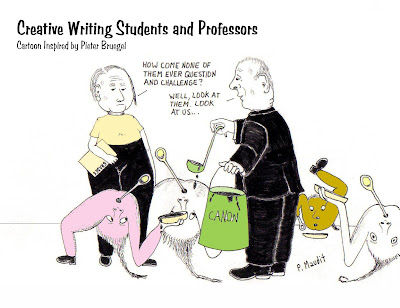 Herr Brueghel was actually Herr Celine's favorite painter. How not to like him? In fact, how not to like both of them? Happy Holidays to the lot of you. I shall be spending x-mas eve in the back of my 1991 Honda two-seater CRX... alone. How does he do it? Tonnage of coverage and a spot in Nashua, New Hampshire hidden in the back lot of a Volvo dealership, where the coppers won't find me. Amen. 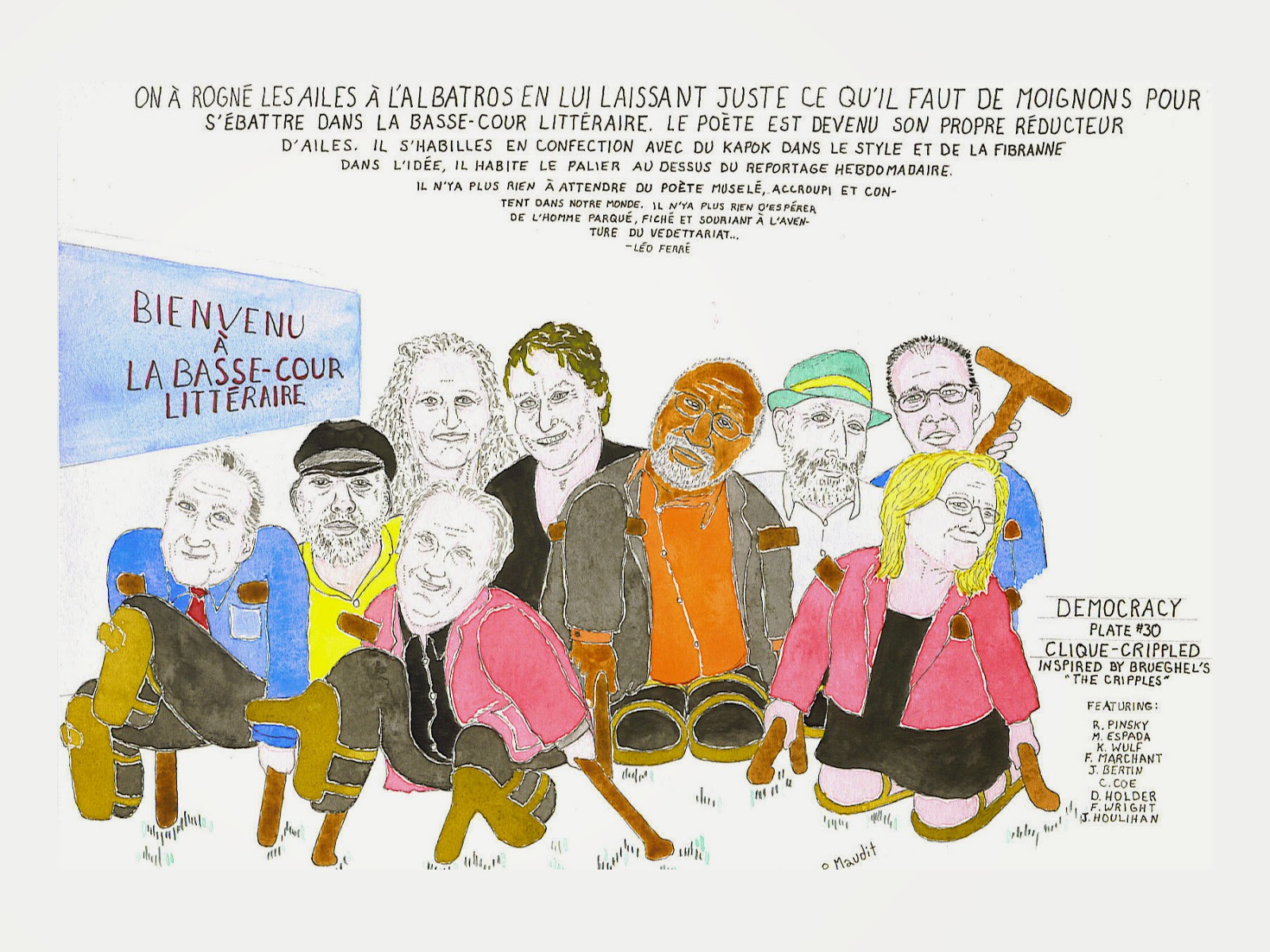 As part of an ongoing experiment to test the waters of democracy, especially in the academic and literary arenas, notice of this blog entry was sent to each of the persons depicted in the above watercolor (see below). Will any of them dare comment? Likely not. Their shame is that they do not cherish, but rather scorn, vigorous debate, democracy’s cornerstone. Their shame, at least those in the teaching profession (Pinsky, Marchant, Houlihan, Wright, and Espada), is that they do not seek to expose their students to all points of view and all possibilities for inspiration with regards writing, including and especially dissidence and purposeful conflict with power. Their shame is their contentment that dissidents like me and others are kept out of their festivals, kept from public funding, and kept from the eye of youth. Their shame is that my freedom of expression and that of other American dissidents is being crushed at every corner. Some of them have even become millionaire professor poets. Indeed, how can one possibly expect raw, visceral truth from such persons?

Again, the only concrete explanation I could come up with was the clique. Houlihan often reads paired with Marchant, who is depicted in a photo hugging Charles Coe of the Massachusetts Cultural Council and Massachusetts Poetry Festival. Coe refuses to address my request to be invited to the Poetry Festival. To that concoction, I added Doug Holder of Ibbetson Press, who interviewed Coe and gave Robert Pinsky, also depicted in the watercolor, a medal or award.

Pinsky seems to be the established-order poet poster boy, invited left and right and everywhere else to read his flaccid poem about a shirt. How mind-boggling can it get? I first contacted him in 1996 or 7, when he was invited to give the commencement speech at Fitchburg State College. I contacted him because of the inherent corruption festering at that institution. He of course was indifferent and did not respond. All he wanted was his 5-10K honorarium. He really does disgust me as a poet.

Doug Holder, on the other hand, has certainly been more open than most poets of the established order. Poesy mag, which he co-edits or co-edited, interviewed me. Doug certainly could have prevented that interview. Also, he did place a link to this blog on his site and even manifested rare established-order poet curiosity by buying an issue of The American Dissident at Grolier's in Harvard Square. So, hats off to Doug... sincerely. Just the same, it is too bad he doesn't push others of the clique like Coe and Houlihan and Marchant to open their doors to dissent. So, come on Doug, give those poet cohorts a little boot in the rump... not for me, but for democracy!

Of course, many others could have been added to the picture. Duke University professor Gary Hull, Director of the Program on Values and Ethics in the Marketplace, for example, could have been added. He refused to respond to my emails requesting he place my signature, as editor of The American Dissident, on a petition he created to decry Yale University’s decision to censor cartoons. Has it perhaps gotten that bad that petitions are only open to certain categories of citizens?

In America, perhaps we are indeed now in the Age of Aberrancy, where censorship has become rampant and censors extolled as moderators of pre-approved bourgeois aesthetics. George Orwell would have gone nuts with so much material to write about!

In essence, the rancid odor of cliquishness characterizes the established-order academic/literary scene. Offend the clique and risk ostracizing. It’s quite that simple. What really concerns the clique is not literature per se and certainly not democracy, but rather the marketing of clique members and their books. It is sad that public cultural councils endorse this kind of cliquishness and hermetic resistance to dissent.

As noted in the watercolor, its idea was also inspired by Brueghel’s painting, “The Cripples” (or “The Beggars”) and Léo Ferré’s 1956 preface to "Poète...vos papiers !" (see www.theamericandissident.org/Essays-Ferre.htm) In the quote, Ferré mentions that poets cut off their own wings, leaving just enough “moignon” (stump) so they may flutter about in the Literary Poultry Yard. He also mentions that we may expect little, if any, hope from poets of that sort.
.......................
From: George Slone
Posted by G. Tod Slone at 8:01 AM 54 comments: