The American Dissident, a Sexist and Racist Publication? 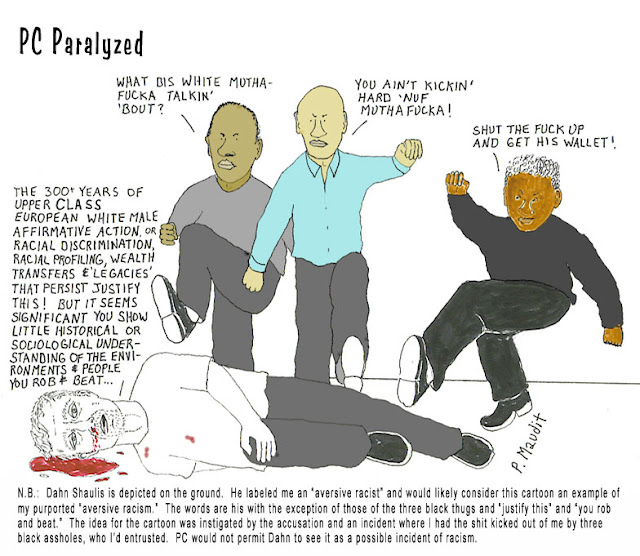 "The United States could become a color-free society. It’s possible. I don’t think it’s going to happen, but it’s perfectly possible that it would happen, and it wouldn’t change the political economy, hardly at all. Just as you could remove the “glass ceiling” for women and that wouldn’t change the political economy, hardly at all. That’s one of the reasons why you quite commonly find the business sector reasonably willing, often happy to support efforts to overcome racism and sexism. It basically doesn’t matter that much. You lose a little white male privilege but that’s not all that important. On the other hand, basic changes in the core institutions would be bitterly resisted, if they ever became thinkable."
–Noam Chomsky, Keeping the Rabble in Line

Racism, sexism, and diversity, as subjects, did not interest me all that much. They’d become hackneyed and entirely PC co-opted. Indeed, in academe, they'd become shamefully far more important than truth and vigorous debate, cornerstone of democracy. But when someone insulted me, as Dahn Shaulis had, insinuating I was sexist and racist, then I responded. Even Al Sharpton argued recently that the PC knee-jerk racism excuse was no longer a valid one for inner city blacks since "We are the man, now!" That PC excuse was used by professors at Duke University to blame innocent white male students. Though I agreed the fight against racism had helped forge the American democracy, I disagreed with Shaulis regarding its importance today. For me, classism was far more pertinent. Indeed, many blacks were now part of the classist-power structure, as Chomsky rightfully noted. Obama, Holder, Oprah, Angelou, Cosby, Jackson, Smith, etc., etc. were certainly part of it.

Shaulis’ conclusion had been brewing for several years. Indeed, over two years ago I’d told him I was brutally kicked and robbed by three black racist dickheads in Baton Rouge, whom I’d foolishly trusted (see poem below in previous blog). Shaulis automatically focused in on my calling them racists, as if blacks could not be racists. He manifested zero compassion regarding what had happened to me. That event and our recent correspondence provoked the above cartoon.

[Interestingly, the New York Times just ran (2/16/09) an article on black racism in New Orleans just around the corner from Baton Rouge. “There’s racism of blacks against Latinos,” noted an illegal Honduran, Roger Cruz. But the Times of course avoided using the term "illegal," which ran counter to PC dogma. Note the major shareholder in the Times was the Mexican billionaire Slim. It also countered what the Honduran said: "The accusation of racism does not ring true to some city leaders. The Hispanic workers tacitly acknowledge some unfamiliarity with the dangerous ways of inner-city life, and in the eyes of some in New Orleans, they have mistaken simple opportunism for racism." Of course, black racism also ran counter to PC dogma.]

Because Shaulis had been such a great financial support, I suggested our exchange and the cartoon not be published, but he argued that would be censorship and insisted they be published: "I never mentioned my financial support of the American Dissident in this email exchange. Don't let that be an excuse for self-censorship."

I’d been accused of a lot of things before, but that was, as far as I could recall, the first time I’d ever been accused of sexism and racism. Well, perhaps not. Back in 2002, I was teaching at Bennett College, an all black female institution. What I’d simply done there, as I’d done at previous mostly white institutions employing me, was “go upright and vital, and speak the rude truth in all ways” (Emerson). Because of my essays and cartoons, published in the Bennett Banner, the student political group decided to hold a forum on them and invited me to participate. There, I was accused of racism, though perhaps indirectly—I cannot recall. One cartoon infuriated a number of students (not all!) and administrators alike. It depicted trustee Maya Angelou and college president Johnnetta Cole meeting obese students at the local Krispie Kreme donut shop (see below). Sadly, that cartoon depicted a real occurrence. Sadly, that college president chose to ignore that obesity and diabetes were perhaps rampant in the student population. What she chose to highlight was that the manager of that particular Krispie Kreme was a "black entrepreneur." It didn’t matter to her that encouraging obese black students to feed on garbage at a donut shop was downright stupid and irresponsible. In vain, I certainly had brought that to her attention. The faculty, of course, remained silent. For cartoons and writing regarding my Bennett College experience, see www.theamericandissident.org/Bennett.htm. 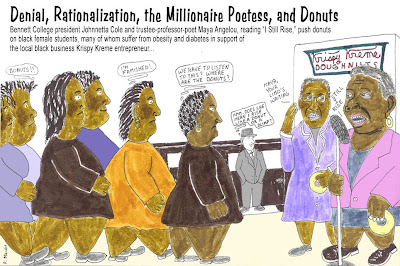 One has to wonder why an educated citizen like Dahn Shaulis could not comprehend the reason for the above cartoon. It was my humble opinion that if one criticized blacks, he or she was not necessarily racist. Indeed, if I criticized, as I did, whites with equal or greater virulence, then a racist I simply was not. Shaulis could not comprehend that simple self-evident truth either. Quite simply, PC would not permit indoctrinees to comprehend logic whenever it countered PC diversity, affirmative action, illegal immigration, and speech-restricting dogma.

"While I hypothesize that some of your American Dissident material would be considered blatantly racist and sexist by those who can deconstruct it better than I, your prejudice is even more apparent in your emails,” wrote Shaulis. Now, Shaulis had a PhD in sociology with, it appeared (he was currently teaching courses on race), a specialty in race and racism, so what he meant by “deconstruct better” did not make much sense at all.

Of course, I asked Shaulis for precision with that regard. But he simply chose not to respond. I also asked him to provide examples from past issues of The American Dissident to back his accusation, but he refused to address that comment. After all, it was an easy thing to accuse and not provide evidence to support the accusation! I wrote a poem on that in 2002.

In Academe
When anonymous complaints overrule truth,
we know we are not in a court of law.

When alleged yelling or anger overrules truth,
the miasmas of collegiality smothers thinking.

When the shedding of tears overrules truth,
the tide of lies and hypocrisy surges…

As for Shaulis’ accusation regarding me, he noted: "No, I wouldn't have you arrested for being the aversive racist and sexist that you are." As for supporting examples of that comment, Shaulis evoked my writing and cartooning vis-à-vis Bennett College and Grambling State University (see www.theamericandissident.org/GSU.htm), another all-black institution later employing me. In vain, I attempted to bring his attention to the many more examples of my critical writing and cartooning vis-à-vis white males, not to mention my favorable highlighting certain black authors. Oddly, he remarked: “It's not surprising that an aversive racist would be blind to his or her own racism, that people might hire an aversive racist/sexist, or that an aversive racist might use quotes from Black authors or publish Black authors."

By the way, Shaulis’ recent sexist/racist accusation was sparked when, in an informal email response, I’d noted a librarian recently issued me a no-trespass order (see blog below), though I’d done nothing at all illegal and was accorded no due process. The librarian must have been “on the rag,” I wrote Shaulis. He focused on that comment and manifested complete indifference to the no-trespass order and lack of due process. Evidently and sadly, for Shaulis and many others like him, including many professors, a harmless verbal comment was far more important than the First Amendment and due process.

Shaulis' racism accusation was further sparked by my mentioning that Obama was proving to be nothing more than “Bubba with a black face.” For him, that was a racist statement. For me, however, it simply recognized that Obama had been stocking his cabinet with former Clinton (i.e., Bubba) cronies. I’d certainly be very interested in hearing from others why they thought that comment a racist one.

Rather than the racist/sexist accusation, what really irked me was the general unfounded accusation that I tended to alter correspondence appearing in the “Literary Letters” section of The American Dissident to make me look good. Shaulis wrote: "Keep the intro and the bolding. They prove my hypothesis that you intentionally craft American Dissident pieces in your favor. I suppose you will also avoid putting my last emails in as well. That appears to be your m.o." Needless to say, his “last emails” were indeed put in.

For the unaltered email exchange, see www.theamericandissident.org/Shaulis.htm. Finally, what characterized the exchange more than anything else, as far as I could determine, was Shaulis’ uncanny inability to reason logically, his absolute focus and insistance on racism, his seeming indifference to matters of free speech, speech codes, and democracy, and his general PC indoctrination. You be the judge.

By the way, the last email sent to Shaulis went unanswered.

Dahn,
One thing that I am not is a grudge holder. Don’t worry, I had no intention of contacting people at your community college. My door will always be open to you, though I do hope you will one day reconsider your accusations and denigration of my character.
G. Tod
Posted by G. Tod Slone at 10:14 AM