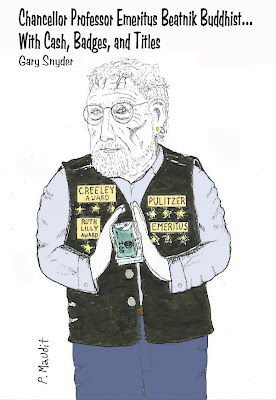 The following is an excerpt from Contention: Conversations with the Established Order and Other Parodias de Discursos.

I tried to read Synder but couldn't get into anything he wrote. But in poetry reputation is what matters not what you write. There is also something askew when a counter culture poet gets on some council, its like he's been given the good housekeeping seal of approval.
—Dave Ochs

Stand alone to decry censorship in the midst of a herd of incoming poets, professors, and poetophiles, and expect not one herd member to support your cause. On the contrary, the literary mass will likely chuckle in harmony, scorn a tad, chuckle again, then dismiss you as an egotistical attention seeker. In the skull of that literary mass, a myriad of reasons will ferment to justify inaction and consequent acceptance, if not outright support, of censorship.

It wasn’t like I hunted for trouble. Illogical nonsense was ubiquitous in America. Step out of the house and there it was sticking its drooling tongue out at you, provoking you to respond, that is, if you had failed the happy-face, positivist citizen indoctrination test. Or even just stay in the house, and there it was mocking away at intelligence. In any case, a correspondent informed me that a poet had just croaked: “Well todd mo/ ore is dea/d did you he/ ar? Check this ridiculous letter that Moore wrote Scot Young.” So, I checked it out and ended up writing and posting a comment. That seemed to have become my profession: comment poster. But the comment was censored. America today was educating an army of little caeser censors obsessing over possible offensiveness, while ever rationalizing censorship and truncation of free speech and expression. The brave new world was here now. Some called it PC.

A back and forth email battle had ensued with Fred Wright because the censor, Scot Young, had sent my comment to him. Moore’s buddies and family were attempting to canonize him. But now the only hope for the poor fellow was a post-mortem Robert Creeley Award, though that hope was a dismal one because, to date, not one post-mortem had been designated. Moore had paraded around as one of the “outlaw” poets, yet he’d spent most of his life as a tenured high-school English teacher and hadn’t even spent a day in jail. Hell, I’d spent a day and so had Henry D, but we weren’t “outlaw” poets. Villon was an “outlaw” poet, spent time in a donjon for murder, was almost executed, and deserved the designation.

It was about 6:15 and still with plenty of daylight. Spring was just around the corner. It had seemed like the longest, coldest winter I’d yet experienced. I was like a bear just out of hibernation partly stunned by the sudden warmth in the air. First, I stopped off at the local library to dump off some DVDs, then headed to the next town over, got lost, then found my way again, and pulled into the lot. I’d prepared a broadside, reworked it a number of times and even drew a cartoon for it. Thanks to friend Dan, I had 50 copies to distribute. Dan had been inviting me to his English classes once every semester for the past three years. Amazingly… astonishingly, he was actually using The American Dissident in those classes.

My protest was against tenured professor poet chancellor beatnik Gary Snyder, who was going to read and receive the Robert Creeley Award. Creeley had lived in Acton before he’d kicked the bucket. Now, he was comfortably enshrined in the literary canon.

A male-female couple about my age, looking definitely like they were going to the reading, were walking ahead of me. They entered the school. I stood outside the doors. Then soon they walked out of the school and were standing in front of me.
—So, you’re the guy hanging up fierce things on poets!
—So, it’s not here?
—No, this is the junior high. The high school is down the road.
The grayish-blond haired woman did the talking and pointed down the road. Several years before I’d protested against the John Ashbery reading. The couple walked on back to the lot. I followed them. The woman had a thick accent.
—Did you say, fierce?
—Yes. Fierce.
—Well, that’s a first. I’ve been called lots of things, but never “fierce.”
—Someone I know was concerned about you.
—You mean that I might have a gun or something?
—Yes. Something like that.
—Well, I suppose I could say the same about that person or you for that matter. So, you’ve seen me before?
—Yes, I’m William Creeley’s widow.
—Ah, so you’re the woman who cried after seeing that cartoon I sketched and distributed?
—Yes.
She didn’t seem angry, just aloof—bourgeois aloof. The boyfriend or friend or whomever remained silent, though seemed to be listening. He had short gray hair, was well-groomed and attired, and definitely looked the part of the proverbial academic poet—no fangs, no rough edges, just proper word craftiness, probably a former hippie turned established order. Clearly, neither he nor she had any interest whatsoever in my protest.
—You know, I wrote something about you just this morning. Another poet died and everyone was praising him. But I didn’t like the guy, so criticized him. And, of course, that upset the poets. One of them wrote: "next time, send condolences to a person's family instead of desecrating his grave before they have even put him to rest." But I figured since they were pushing for canonization, they should be prepared for not just happy-face commentary. If the family really wanted peace, it shouldn’t have been pushing the fame button. So, of course, that reminded me of you.
She didn’t respond. Perhaps she didn’t quite understand. But evidently the same thing pertained to her husband, who she’d help canonize with the Award.
—Are you Deutsch?
—No, I’m from New Zealand.
They walked over to their car, while I to mine and without good-byes or see-you-laters. Last time I'd protested in Acton, the gala was indeed held at the junior high school. So, maybe Snyder was higher up in the bourgeois poet-pecking order than Ashbery, since his reading was at the high school.

I bet some of the listeners at the reading
were sitting there listening to Gary Snyder,
and thinking:

"this must be special-
it's supposed to be special, if it's him,

but a voice inside me tries to remember
just what it was the guy outside was saying".

I finally read this all the way through. Very funny. I think this sort of action/short story style is easier to read than your typical essay. I loved it. When someone threw you a dollar bill and you picked it up I laughed out loud. Good story, replete with your message of the incurious crowd/herd. The fact that Gary came in another door was classic! I read Snyder probably 20 years ago and thought he was nothing but so-so. The only reason he is still getting a crowd at all is because of his association with the "beats", because he is one of the few left living.