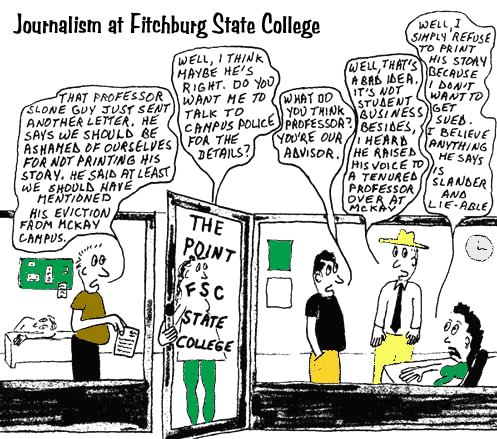 To James Sullivan, Boston Globe Correspondant:
Your article “At Fitchburg State: A History Lesson Rekindled” (http://www.bostonglobe.com/metro/2011/09/15/fitchburg-state-history-lesson-rekindled/2DZ1V3MgFbutrtWZqS0SmN/story.xmlon) grabbed my eyeballs… big time! As a former Fitchburg tenure track professor, I battled against administrative and faculty corruption in 1995-6. Because of that corruption, I won a year’s salary as settlement during my fifth and final year at the college. What was truly disturbing, however, was my inability to interest the student newspaper to cover my story. It would not even note that I was evicted from my office mid-semester and had to have all my classes rescheduled. One professor, Jeannette Scharf, who is now dead, had complained she was afraid of me. Yet, I had and still have no criminal record whatsoever. The Boston Globe and Fitchburg Sentinel and Enterprise wouldn’t cover the story either. To this day, I could be arrested if I step foot on McKay Campus. Dean Nowotny refused to rescind that order. It is shameful that your article seemed to depict Fitchburg as some kind of Free Speech and democracy advocate. How absurd!


Over the years, I’ve contacted the college’s student newspaper, requesting it to cover my story. To date, student editors refuse to respond to my emails. Some of the old corrupt cronies are still at the college, including Shirley Wagner. Some of the cowardly professors are still entrenched in the Humanities Department, including Walter Jeffko, Susan Wadsworth, Robin Dinda, Jane Fiske, and Maria Jaramillo. It is sad that these professors are unaware that democracy depends on courageous individuals who dare stand up alone if necessary. Other corrupt cronies have become honorable (?) professor emeriti, including Harry Semerjian and Richard DeCesare. Still others, the cowards and phonies are implanted in the Humanities Department.


As a direct result of my horrendous experience at Fitchburg, I ended up creating The American Dissident, a 501c3 nonprofit journal of literature, democracy, and dissidence. For actual documents et al regarding corruption at FSC, take a look at the journal’s website, in particular, www.theamericandissident.org/FitchburgStateCollege.htm.


In reality, it is thanks to that corruption that I’ve become highly critical of higher education and highly creative. If I’d gotten tenure at that joint, I would probably be fat, fluffy, and pensioned today, and wouldn’t have ended up as a hardcore dissident writer and cartoonist, nor would I have had the interesting opportunity to teach several years in Louisiana, several in North Carolina, several stints on two US Navy battleships, six months on Martha’s Vineyard Island, etc. So, bitter I am certainly not. Nevertheless, I will always raise my voice when confronted with the kind of hypocrisy Fitchburg manifests. Now, when will it be inviting me to one of its Constitution Day forums… to talk about the corrupt president Vinny Mara et al? No, I shan’t be holding my breath.

By the way, Fitchburg has been accorded the red light designation regarding free speech by the Foundation for Individual Rights in Education (see http://thefire.org/spotlight/codes/734.html) . That designation is the worst designation. “A red light university has at least one policy that both clearly and substantially restricts freedom of speech.” Now, why aren’t the student newspaper editors covering that story? And why won’t the university’s Constitution Day forum evoke it? Now, will the Boston Globe cover my story? Nope!
Posted by G. Tod Slone at 9:12 AM

"One professor, Jeannette Scharf, who is now dead, had complained she was afraid of me."

Well George, I could see why she would be frightened. You do kind of fit the image of the archetypical mad scientist. Ha ha, just kidding.