The front cover and editorial for issue #33 of The American Dissident... 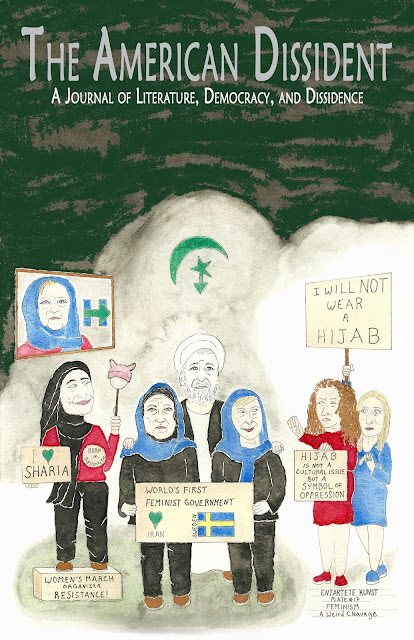 Ideology Trumps Reason
O Prophet! Tell your wives and your daughters and the women of the believers to draw their cloaks (veils) all over their bodies that they may thus be distinguished and not molested.
—Koran 33:59

It seems students in perhaps many universities today are learning to scorn the principles of democracy. And indeed when their professors and academic administrators manifest scorn or at best apathy regarding those principles, how to be surprised?  As an example, my academic bosses, Dr. Gregory Stratman, Dr. Lorna Wheeler, and Dr. Grace Glass, at American Public University System  (American Military University & American Public University) ordered me to cease exercising my purported right to freedom of expression (no threats issued, no prohibited vocabulary used) and refused to provide me with further courses until I’d taken one of their unremunerated, deadly tedious re-education “netiquette” workshops.  Well, I didn’t take the latter and ended up disobeying the order and was thus finally “separated from the university” (their term for fired) after six years teaching for $130 per student head. What I’d done was simply respond to Dr. Dean Givens, a faceless character operating from an unnamed student financial organization, who’d contacted me out of the blue regarding “The few [student] comments I received indicate: sarcasm, racism, bullying, and a ‘flaming’ tone. I urge you to attend a netiquette course immediately.”  So, accused of being a racist bully with a “flaming” tone, I was ordered not to respond!  The irony: the military (and APUS), where absence of free speech, purportedly protects free speech.  Go figure!

It seems students in perhaps many universities are embracing the inane principle of islamophobia, the fear of Islam. Well, I am definitely islamophobic. The front cover of this issue surely outs me there! Many female students in America celebrate “Wear Hijab Day” in full blissful ignorance that in Iran, for example, females are forced to wear them. When a line of Swedish women with covered skulls walked past Iranian President Hassan Rouhani, UN Watch rightfully called it the “Walk of Shame.” What made it truly shameful was that those women professed to constitute part of the “World’s First Feminist Government”! How aberrant could it possibly get?
Standing on the soap box on the front cover is American Muslim national co-chair of the Women’s March, Linda Sarsour, who is openly pro-Sharia Law, which demands not only the head cover, but also submission of females in general.  Islam means submission, not peace.  Now, how did someone like her become a co-chair?  Again, can it get any more aberrant?  Next to her stands  Swedish Trade Minister Ann Linde, who argued: “It is law in Iran that women must wear the veil. One can hardly come here and break the laws.” Some feminist, eh!  Next to her is Swedish Ambassador to Iran Helena Sangeland. On the opposing side is Masih Alinejad, Iran-born journalist in exile in England, who wrote, “By actually complying with the directives of the Islamic Republic, Western women legitimize the compulsory hijab law.” Then depicted is chess champion Nazi Paikidize, who decided against wearing the hijab, thus could not  go to Iran for the Women's World Chess Championship (2017). Kudos to those two women! Not depicted is another heroine, Dorsa Derakhshani, Iranian chess champion, expelled from the national team for refusing to wear the hijab.  Hillary, of course, chose to wear the hijab, but politicians Marine Le Pen (France) and Ingvil Smines Tybring-Gjedde (Norway) refused and thus had their scheduled meetings annulled. Other courageous feminists exist, including Malak Al Shehri (the “Saudi Rosa Parks”), arrested, imprisoned and receiver of many death threats for not covering her head, and Qandeel Baloch, a young Pakistani celebrity, who posted selfies without her head covered, then was strangled to death by her brother in an “honor killing,” who boasted:  “I am proud of what I did. I drugged her first, then I killed her. She was bringing dishonor to our family.”  Hillel Neuer, UN Watch, reasonably argued: “If Sweden really cares about human rights, they should not be empowering a regime that brutalises its own citizens while carrying out genocide in Syria; and if they care about women’s rights, then the female ministers never should have gone to misogynistic Iran in the first place.”  Yes, I am islamophobic!

On another note, it has been impossible for me to find literary/art magazines willing to publish any of the critical essays or cartoons I create with the exception of Global Free Press, an online Canadian journal. Otherwise, upsetting editors with uncomfortable truths has in fact become my modus operandi: writing or sketching what I know won’t get published, and not because of some fault in the forme, but rather in the fond (substance). And yet I continue probing, as the Literary Letters section at the end illustrates (please do send letters!). And I continue presenting futile challenges like the following to Matt Gill, editor of Cape Cod ART because, well, that’s what I do.

Why not, for example, include just one little page at the end of Cape Cod ART devoted to rare artists on Cape Cod who criticize the art establishment, including you? Or how about 1/8th of a page?  Get my drift? Yours is likely the same “absolutelynot’ism" found in poetry and writing magazines across the country, not to mention newspapers.

Futile? Of course! I’d sent three of my aquarelles to the guy… and likely he  and the other art judges knew the local pillars of Cape Cod satirized in them. So, why bother? Well, bothering, as mentioned, has become my principle inspiration for writing and sketching.  Well, the guy actually responded, and we had a short back and forth. He terminated the “dialogue” with some compliments:
Excellent points made in this letter.  I admire your convictions!  I do see the irony of phrases and philosophies such as "all the arts for all of us," and then, yet, there's exclusion. However, I cannot take on that particular battle on this particular day (day off).
Of course, his last sentence was bullshit, obfuscating the real reason: he who seeks to keep job and climb the ladder must not “take on that particular battle” on any day, off or on.  Period.  And that was the last I heard from him.  BTW, I voted AGAINST Hillary and didn’t care if Hitler himself were running against her.
For Blind Followers and Hack Surrogates
Trump is a businessman and now a politician.
He is thus a Machiavellian, not a truth teller.
He is like Obama and all those who preceded him.  Like it or not!

Regarding my Sturgis Library battle, I recently engaged in a rather fruitful dialogue de sourds with the director of the American Library Association’s Office for Intellectual Freedom, James LaRue. Yes, Orwellian definitely comes to mind! Thought-poems created from the ashes of that battle appear on p47. Kudos to John Lauritsen (p10) and David Seidemann (p37) for also creating from the ashes of their particular battles with the establishment!  In any case, everything we humans do, including such battle, is but a diversion away from the reality awaiting each of us: the Black Hole Abyss…

Wanted: Pro-bono legal assistance. The editor has no civil rights in Barnstable, MA, where he lives, and would be arrested and incarcerated if he attempted to attend a political or cultural event held at Sturgis Library, his neighborhood library.  No due process or trial took place.  The post-facto justification for the permanent banning was “for the safety of the staff and public.” Yeah, dangerous!