Submissions wanted for next issue!

The American Dissident is currently seeking new submissions for issue #42, which will likely be published in late November.  Please read the guidelines on www.theamericandissident.org prior to submitting.  Thank you!

Below are the front cover and editorial for the previous issue #41. 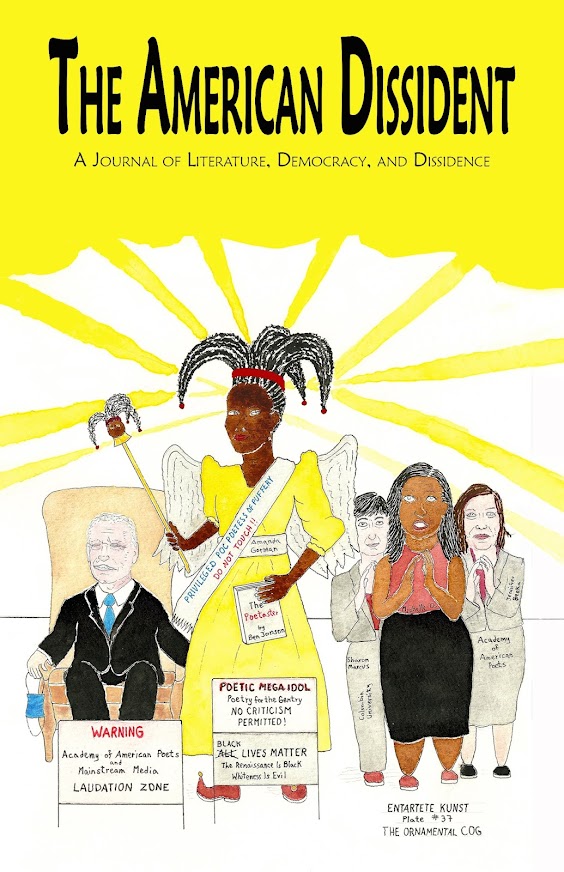 Identity Politics, How Dare You &

…that this nation, under God, shall have a new birth of freedom—and that government of the people, by the people, for the people, shall not perish from the earth.

Democracy is dying… and always has been.  Government of the corrupt elite, by the corrupt elite, for the corrupt elite is America’s reality.  We, the Proles, must conform and shut our mouths or be punished!  (Now, for Trish Somers, I must state that’s what happened to me at Sturgis Library! See Literary Letters section.  LOL!)  Anyhow, welcome to the insane nation… promoted by the MSM!

The front cover of this issue depicts the inaugural poetess Amanda Gorman.  The flurry of 100% laudatory, established-order reviews with Gorman’s regard provoked me to sketch the poetess/goddess… in the same pose depicted on Time magazine’s front cover (see below).  The laudation came from the likes of Toi Derricotte, co-founder of Cave Canem (White poets need NOT apply!), who stated:  “She seems to have awakened the spirit of poetry the way I think it was intended to be, to be a voice of the people.”  Voice of the people or rather voice of the oligarchs and their hack politicians?!  Racist! Racist! Racist!

Standing behind and to the right of the Ornamental Lit Cog, I depicted Michelle Obama, who interviewed Gorman for Time magazine; Sharon Marcus, English and comparative literature professor at Columbia University, who declared, “we’re overdue for a poetic mega-idol”; and Jennifer Benka, Executive Director of the Academy of American Poets, who stated, “She mapped, in language, a way forward, giving us healing directions that we can repeat to ourselves.  It’s just been too painful.”  Oh, my.  Other “laudatorians” could have also been depicted. On the other side of the Ornament, career multimillionaire public-servant Biden is seated in his new throne.  My concern was that Biden’s groping might take the attention off of Gorman.  But it would have been too difficult to reposition the left arm, which had already been inked in.  Ainsi soit-il.  The reasoning for the front-cover depiction is laid out in “Press Panegyrics for a Poet” on page 14.  BTW, if Trump had had an inaugural poet, I certainly would have sledgehammered him or her on a front cover.

s for the back cover, Santa Clara University’s highly subjective “degrading language” policy, as well as its poor free-speech track record, incited the  Foundation for Individual Rights in Education (FIRE) to accord the university the Speech Code of the Month for November, 2020.  Do the student editors of Santa Clara Review give a damn about that?  No.  Do their academic advisors give a damn?  No.  According to the review’s website, “Throughout its duration, the publication has represented Santa Clara University's commitment to the humanities—a tenet of Jesuit education.”  Well, I suspect the “humanities” has come to mean identity politics, cultural-race theory, censorship, equity not equality, and rejection of liberal values, including freedom of speech and vigorous debate. SCR’s response to the back cover is in the Literary Letters section.

On another note, and in a vain effort to clarify for the confused, the term dissident does NOT mean socialist or communist.  In reality, it stems from those who fought against autocratic socialist and communist regimes, including the former USSR, China, and Cuba. It implies fighting for freedom of speech and expression.  In America today, freedom to speak ones mind often results in cancellation of ones voice because socialist and communist mindsets have been gaining power at an alarming rate and today control much of the cultural, media, and academic realms, not to mention the political.  Dissident means fighting for reason, facts, and logic against the reigning ideology.  Dissidence is not ideological-partisan adherence.

Cancel culture really means cancellation of facts, reason, and logic.  Disinformation really means any information, no matter how true and factual, that counters the ideology in power (e.g., the deep state and Neo-Marxism).  It is the new term of predilection.  Why the need for a new term in the already mega-arsenal of shoot-the-messenger terms? Perhaps to simply rejuvenate the shooting? Both concepts seek to terminate freedom of expression and to be mostly espoused today by left-wing, woke partisans.

“Dark and vile verbiage” is an interesting phrase, due to its highly subjective nature.  The term serves to eliminate freedom of expression.  An aberrant case at the University of Illinois at Chicago brought it to the public attention.  FIRE noted:  On an exam issued by law professor Jason Kilborn, who even self-censored: “a ‘n____’ and ‘b____’ (profane expressions for African Americans and women).”  It was a hypothetical in which a woman accused her former employer of calling her nigger and bitch.  And yes, I will write the full words until I am dead.  Call me a Nazi-white-nationalist-racist-misogynist-xenophobe-transphobe or whatever other “dark and vile verbiage.”  I don’t give a damn.  Still, I will not call a black person, a nigger.  If I were to do that, it would imply a certain childishness and lack of cogent argumentation.  Far too much ad hominem is being thrown around today by grown, purportedly educated adults, black and white.  In any case, a group of spineless Black Law Students Association members had put together a petition, accusing the professor of using “dark and vile verbiage,” which led to his suspension.  One black student had declared she had had “heart palpitations.”  Wow.  Later, however, the professor was reinstated.  Reason trumped… or almost… or sort of…

he forces of conformity have become very strong today in America, especially as censorship (moderation) has spread as an intellectual plague.  Conform or be cancelled.  Think as the group or you will not exist.  Sadly, most poets, professors, journalists, and editors easily give in, promote, and espouse those forces to the extent that the force of truth has become very weak.  Rather not be cancelled than dare stand up and speak the truth seems to have become the general modus operandi.  Rather write the dictated “n-word,” for example, than the word it stands for, “nigger.”  For the bulk of conforming professionals and leaders, thou shalt never cross the line of dictated propriety.  And that is why I hold little respect for titles like Dr. (PhD), Laureate, Honorary, Judge, Senator, Director, and on and on.  Oops!  I forgot to include editor.

Finally, when I accepted his poem, “January 6, 2021” (see next page), though told him I didn’t agree with it, Dan Sklar wrote: “That's one of the things I have always respected about you, open to all viewpoints.”  And I thought, if everyone had the same viewpoints, then I’d have no grist at all for creating critical writing and critical cartoons.  Indeed, confronting different viewpoints provokes thought and creativity, at least for me. Equally, I must thank Dan for his openness.  Hell, he was the only professor ever to have invited me to his classes to speak to his students…

george your email isn't working hope everything is ok, i haven't recieved the new AD.
dave