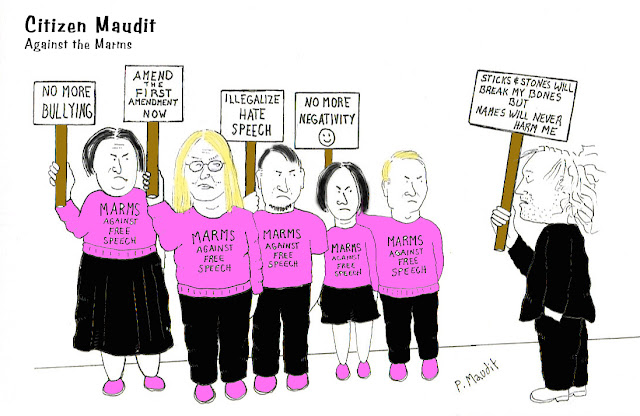 Women in Power
Playing the He-Makes-Me-Feel-Uncomfortable Card
The idea that there is a conflict between free speech and the academic community fundamentally misunderstands both the goals of higher education and the nature and role of free speech.
—George Orwell
Orwell, of course, made some wonderful observations.  The one above is perhaps one of his best and clearly could equally apply to libraries and library directors.
It is my observation, from several decades of knockng on the doors of public libraries, that public library directors are almost always female, behave as gatekeepers prohibiting certain viewpoints, especially when critical of public librarian behavior, as well as that of the local pillars of the community.  They generally do not celebrate the First Amendment, though do perform little charades during Banned Books Week.  Not all librarians, of course, but certainly the very large majority of them!  And the staff at the American Library Association are as bad as the worst.
The above cartoon was drawn a year and a half ago regarding Lucy Loomis’ order that I cease leaving flyers at Sturgis Library and not talk to speak to staff about that.  Realizing Loomis could probably no-trespass me from the library if I did not obey the command, I decided to obey it.  I needed and still need the library for the internet.  My job demands it.  So, now I must travel further for it.  Loomis has punished me—the school marm punishing the little refractory school boy.  The marm's mentality is:  If you criticize me, I'll punish you!  Marms seem to be crying "bully," as in wolf, right and left today, then behaving as bullies themselves whenever their power might be threatened.  Loomis' power was threatened because I underscored her flawed sense of reasoning and resultant hypocrisy.  Therefore, she bullied me with the help of three cops.


Since the permanent no-trespass order issued verbally on June 19th with my regard in front of no less than three police officers in the library (see previous blog post), I contacted the following with little results:


-Barnstable Town Manager Thomas K. Lynch = NO RESPONSE
-Eleanor Claus (friend of Loomis), President of the Town Library Committee = NO RESPONSE
-American Library Association = NO RESPONSE
-Cape Cod Times = NO RESPONSE
-First Amendment expert, Harvey Silverglate = referred me to the ACLUM
-ACLUM = NO RESPONSE
-Police Station = paid 50 cents for the police report, which only stated:  “harassment, male” (see below)
Since the police incident, I have been obsessing over what occurred.  Loomis has made me feel sincerely depressed, uh, “uncomfortable.” I sketched another cartoon with her fascistic regard, which will be in the current issue of The American Dissident due to be distributed in a month.  If citizens do not take a stand vis-à-vis the bugeoning mob of little caesars in their midst, Freedom of Speech and Due Process will cease to exist in America.

Perhaps I shall try to create a local First Amendment Club.  Hell, there’s a much publicized Hydrangea Club in the area, not to mention the Writer’s Conference, which is really the same thing (First Amendment apathetic).  I am somewhat desperate to learn if anybody else in the area shares my passion. 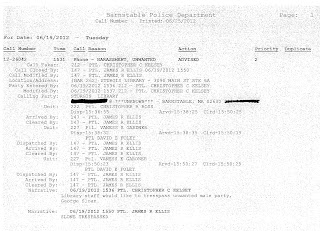