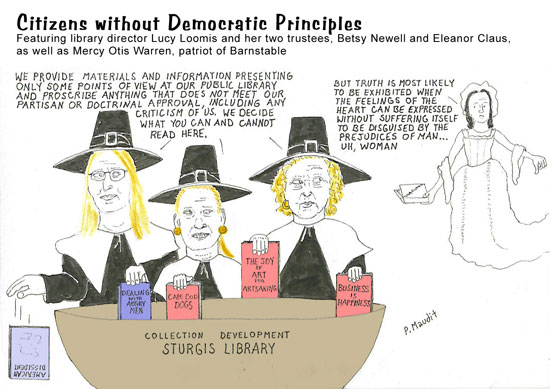 Open Letter to the Public Librarians of Cape Cod

In almost all the 45 libraries studied here, and probably hundreds and hundreds more across the country, we have failed our professional duty to seek out diverse political views. [...] These books are not expensive. Their absence from our libraries makes a mockery of ALA’s vaunted ‘freedom to read.’ But we do not even notice that we are censoring our collections. Complacently, we watch our new automated systems stuff the shelves with Henry Kissinger’s memoirs.
—Charles Willett, Founding Editor, Counterpoise, and retired librarian [remarks presented at the Fifth National Conference of the Association of College and Research Libraries]

Thanks to the Internet, this letter will form part of the public record, as it is now published on The American Dissident blog site (wwwtheamericandissidentorg.blogspot.com).  If none of you respond, as is perhaps likely, that shall be noted.  By the way, it took me about an hour to locate and compile your names and email addresses.  In fact, a few of you do not even list your names and email addresses on your library’s website.  Why not?

In any case, most of you, I’ve already contacted in vain, which is why I am writing this letter.  A number of you have simply ignored my communications (e.g., Osterville, Falmouth, Brewster Ladies).  Others simply greeted me with frowns, while a few actually banned my flyers on their public grounds (Sturgis and Yarmouth Port).  In fact, the director of Sturgis Library even instructed me not to speak to staff with regards the banning and rejected a free subscription offer to The American Dissident, a 501c3 nonprofit journal devoted to literature, democracy, and dissidence, printed in Barnstable.  And yet why should I even be offering a free subscription?  Do Time, Poetry, People, and National Geographic do that?


Not one of you to date has been willing to subscribe (only $20/year) to the journal or express an unusual openness to the ideas expounded in it.  The Clams network of libraries on Cape Cod has consequently conveyed a uniform closed-mindedness with its regard.  Why?  Is it because the journal’s substance is DEMOCRACY and CRITICISM, as opposed to the sex and violence you tend to purchase in the form of DVDs?  Is it simply a panem et circenses issue?


What is therefore wrong with the libraries on Cape Cod?  Why do they all seem to be staffed with chamber-of-commerce-friendly directors, instead of free-thinking citizens with a definite responsibility towards democracy?  Why do you seem to fear and disdain criticism so much?  Why do you seem so opposed to vigorous debate and freedom of speech, democracy’s cornerstones?  On the one hand, you celebrate Banned Books Week while, on the other, you ban periodicals like The American Dissident.  How do you manage to intellectually justify such egregious hypocrisy?


In the case of Sturgis Library, the collection development policy clearly stipulates:  “Libraries should provide materials and information presenting all points of view […],” “Materials should not be proscribed or removed because of partisan or doctrinal disapproval […], and “Libraries should challenge censorship […].”  With that regard, Sturgis subscribes to Poetry magazine, which presents the established-order point of view on what constitutes good poetry, but refuses to subscribe to The American Dissident, which clearly presents an anti-established-order viewpoint regarding poetry.  One might wonder how the director intellectually justifies such an evident breach of the collection development policy.  “This is a family-friendly place” and “I think there’s too much negativity” constitute her rationale. Yet such remarks clearly skirt the issue entirely and do not, by any means whatsoever, constitute a valid explanation.  Besides, since when did democracy and dissidence become family un-friendly, while sex and violence family friendly?  Perhaps librarians need to take courses on logical argumentation.  By the way, the staff at Sturgis have been friendly and quite helpful.  Clearly, this letter is not directed at them.  As for the two trustees, Ellie Claus and Betsy Newell, with whom I met, they proved as closed-minded as the director.  Dan Santos, the third trustee, didn’t even bother showing up for the meeting.

As you certainly must know, the above policy statements come directly from the American Library Association’s “Library Bill of Rights.”  Interestingly, or rather aberrantly, the ALA’s Office of Intellectual Freedom (Ministry of Intellectual Freedom in Orwell’s 1984) simply refuses to respond to my grievance regarding Sturgis.  Not a word from it!  Not even a lame rationalization, as in “we’re family friendly.”  Silence seems to have become, for far too many librarians, the librarian’s modus operandi, the de facto “Library Bill of Rights.”  Librarians on the Cape, rather than individuals, seem to move as a groupthink librarian herd.


In any event, what good can it do the nation to have directors like you in charge of what the public may or may not read in its public libraries?  What good can it possibly do for democracy?  Why would not one of you likely accept a bulletin-board donation for a space devoted to DEMOCRACY?  On top of such a board, one could write:  WARNING:  POSTINGS ON THIS BOARD MAY BE OFFENSIVE TO ADULT CHILDREN.


As a tax-paying citizen, should I not be fully outraged that my voice is banned at one of your public libraries?  Should I not be outraged that bed & breakfast brochures, Prime Time, and other free publications are permitted, but not my 501c3 nonprofit flyers?  Even dogs have been permitted to run around inside the library!  If one or even two of you do not believe in the curiosity-killed-the-cat dictum (it’s so much easier to be indignant!), read the article published in Counterpoise for Social Responsibilities, Liberty, and Dissent, regarding my struggle vis-à-vis democracy-scorning public librarians exterior to the Cape (www.theamericandissident.org/orgs/american_library_association.html).  Thank you for your hopeful attention.
Posted by G. Tod Slone at 10:50 AM

Radical literature used to be banned…now its just ignored.

The latter tactic is much more effective.

Executing a dissenter, or banning a book, sometimes only serves to make them more powerful.

Ignoring them…that is the key. That way you insure that no one hears what they have to say.

It seems that this is neo-censorship. This is the modern method of censoring people, seemingly without even really having to censor them.

Tim,
Great comment on neo-censorship. You need to poemify it.
T.