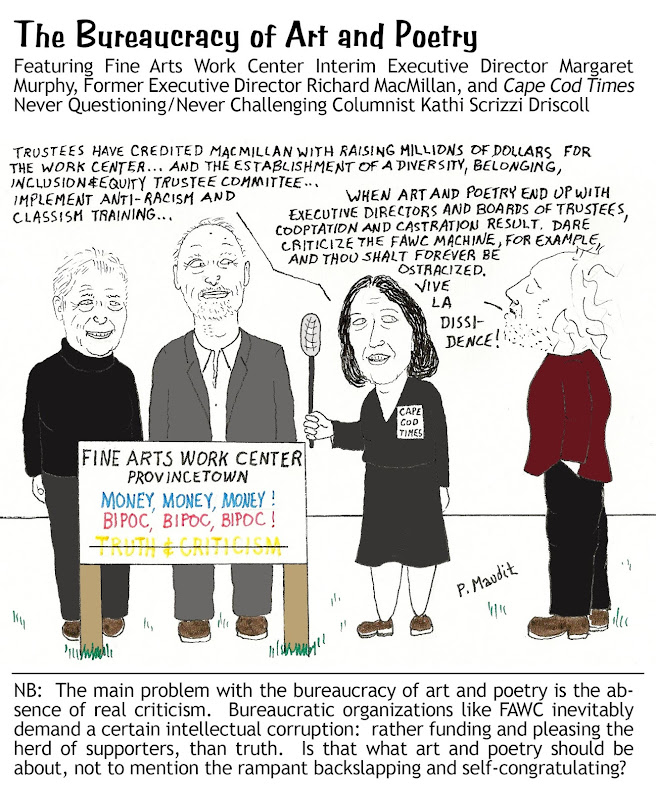 Driscoll notes, “The nationally known work center, founded by artists and writers, was one of just two Cape Cod institutions—the Provincetown Art Association and Museum was the other—to win a grant in the National Endowment for the Arts’ first round of $27.5 million funding for 2021.  Money, money, money! On the other note, Driscoll echoes FAWC officials “will continue to develop long-term efforts toward ensuring that every member of our community feels safe, supported, heard and valued.”  Every member EXCEPT, of course, he or she who dares criticize FAWC!  “How dare you!” had said the teenager.  As an example, I have actually dared… not to adorn the usual artist/poet-sheep conformist money-begging attire and have actually stood up to criticize FAWC and its publicist, the Cape Cod Times.  Would FAWC ever offer me a fellowship?  No way, Jose!  OMG, did I just commit the crime of cultural linguistic appropriation?

In today’s politically-correct society, boasting efforts of inclusion and diversity inevitably ends up meaning efforts of exclusion and uniformity—thou shalt be in-lockstep with the reigning ideology!  Moreover, when art and poetry end up with executive directors and boards of trustees, art and poetry ineluctably end up coopted, castrated, and corralled… in the name of inclusion and diversity.  Artists and poets end up adopting the sad modus operandi of backslapping and self-congratulating… due to the inevitable absence (i.e., exclusion) of real criticism.   And without such criticism, improvement is likely never going to really happen.

Silence tends to be, apart from ad hominem, the only defense for those in power positions, including executive directors and museum curators (censors).  FAWC never responded to the criticism I sent over the past decade and a half.  Ah, but FAWC publicist Provincetown Arts’ Executive Editor Chris Busa responded, though not at all intelligently:

“Silly Slone, I was trained in literary studies during a decade in graduate school with some of the foremost critics of the time. Your idea of criticism, from the shrillness of your rants, excludes any sense of illumination. Please do not contact me again.”

Apparently, those “foremost critics” failed to teach Busa how to grow a spine and respond with reason and facts.  Power positions inevitably demand a certain intellectual corruption:  rather funding and pleasing the herd of supporters, than truth—rude truth.  Is that what art and poetry should be about?  Methinks no; youthinks yes…

(A Poem for Margaret Murphy)

In general, it seems,

In general, it seems,